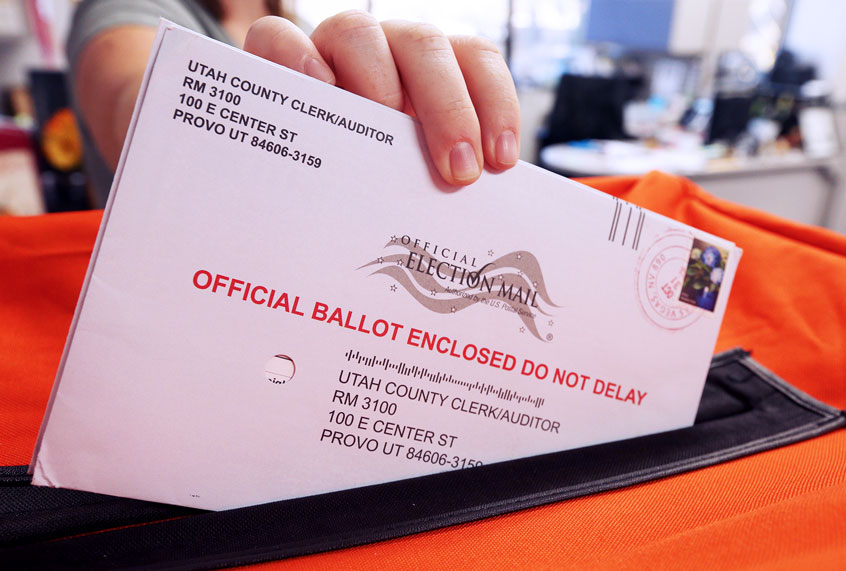 The United States Postal Service (USPS) sent letters warning boards of elections in 46 states that the agency might not be able to process mail-in ballots in time to ensure they are counted in the 2020 presidential election.

News of the letters broke Thursday, when the Associated Press reported that Pennsylvania’s secretary of state cited the letter in a court filing asking the state Supreme Court to extend the election deadline there. The letter said mail-in ballots might not arrive on time, because deadlines were too tight for USPS “delivery standards.”

Dozens of states received similar letters, postmarked around the same time, the Washington Post reported Thursday. However, the phrasing is not identical, with some states receiving more narrow warnings than others. Salon obtained copies of letters sent to secretaries of state in Colorado, Florida, Minnesota, Missouri, North Carolina and Texas.

RELATED: Minnesota’s secretary of state is “worried” about a “coordinated effort” to undermine voting by mail

The Wisconsin Elections Commission (WEC) did not receive a letter. WEC administrator Meagan Wolfe suggested to Salon that the USPS might have sent a letter to the secretary of state by mistake, though that department has not handled elections since the ’70s.

In the letters containing the most severe warnings, USPS general counsel Thomas Marshall warned that “certain deadlines for requesting and casting mail-in ballots are incongruous with the Postal Service’s delivery standards.”

“This mismatch creates a risk that ballots requested near the deadline under state law will not be returned by mail in time to be counted under your laws as we understand them,” the letter said.

Pennsylvania Secretary of State Kathy Boockvar said in Thursday’s court filing that this warning posed an “overwhelming, statewide risk of disenfranchisement for significant numbers of voters.”

Boockvar added that the warning was a surprise and “a significant change to the outlook for voting by mail.”

Boockvar, who heads elections in the state, asked the court to extend the deadline for mail ballots to three days after the Nov. 3 election date in order to accommodate the new delay apparently foreseen by the agency.

The USPS indicated in its letter that it would take between two and five days to return all ballots, but that is longer than the agency had estimated ahead of the Pennsylvania primary, according to Boockvar’s filing.

“Department of State officials were in close contact with representatives of the Postal Service in the months leading up to the June 2020 primary election, and were not given any reasons to expect that delivery of first-class mail take longer than the typical one to three business days,” the filing said.

“To state it simply: voters who apply for mail-in ballots in the last week of the application period and return their completed ballot by mail will, through no fault of their own, likely be disenfranchised,” the document added.

The warning about tight delivery windows also puzzled Minnesota Secretary of State Steve Simon. A recent court order in his state already changed the rules for this year’s election, allowing voters in the state to mail their ballots all the way through Election Day and extending the delivery timeframe for up to seven days thereafter.

“There was no mention of any of that in this letter,” Simon said. “It was like they didn’t know about the court order.”

Boockvar’s court filing came in the hours after President Donald Trump said in a Fox Business interview that he would block billions in USPS funding requested by House Democrats to ensure a smooth election, citing the threat of universal mail-in voting.

“They need that money in order to have the Post Office work, so it can take all of these millions of ballots,” Trump told Fox Business host Maria Bartiromo. “If they don’t get those two items, that means you can’t have universal mail-in voting. Because they’re not equipped.”

Trump made similar threats to mail-in voting during a Wednesday news briefing on the coronavirus pandemic.

While presumptive Democratic nominee Joe Biden has constantly polled with a comfortable lead in Pennsylvania, it remains key swing state, which Trump carried by just 44,292 votes in 2016. If the Pennsylvania Supreme Court extends the deadline, as Minnesota’s high court did, it may increase the likelihood that election results will not be known for days after in-person ballots are cast Nov. 3, another scenario which the president has recently declared intolerable.

Trump and a number of prominent Republicans have pushed false conspiracy theories about the security of voting by mail, only to be revealed later as having cast mail-in ballots themselves.

The president and first lady Melania Trump have reportedly requested and received mail-in ballots for Tuesday’s primary elections in Florida.

Why the Bolivia coup is not a coup — because the U.S. foreign policy establishment wanted it