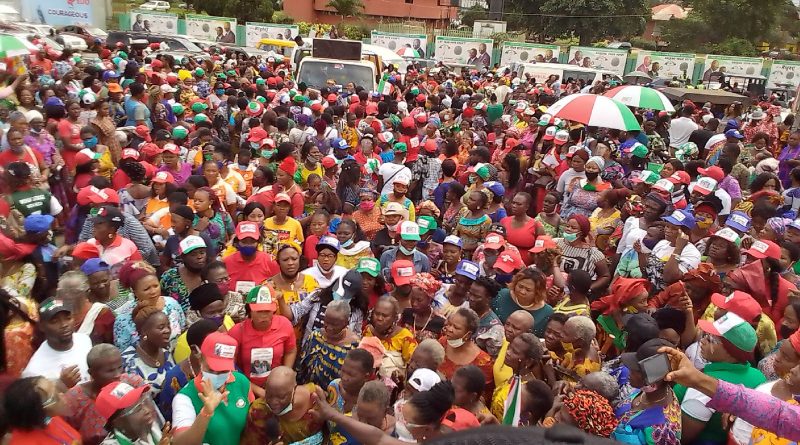 The women’s wing of Peoples Democratic Party (PDP) from the seven local government areas of Edo South in their thousands, yesterday, stormed the premises of the State House of Assembly to solidarize with governor Godwin Obaseki ahead of the forthcoming governorship election in the state, just as they condemned the impeachment of the Speaker, Frank Okiye.

Their presence resulted to heavy gridlock at the Ring Road thereby forcing motorists to take alternative routes to their destinations.

The leaders of the women from the seven local governments took turn to air their minds in support of governor Obaseki.

Addressing Journalists at the front gate of the House of Assembly, Edo South Senatorial Leader, Lady Uwa Osunbor said they have chosen to come out en-mass to throw their weight behind the incumbent governor in order to complete the projects he has already started.

She said their coming out in their numbers is to let the citizens of the state know that they are solidly behind him and are willing to vote him (Obaseki) and Philip Shaibu back in the September 19 governorship election in the state.

Uwa, while condemning the impeachment of the House of Assembly Speaker, Frank Okiye, said the people of the state only have one Speaker known to them and which is Frank Okiye.

“We have already spoken to the people of Edo State.

“We have one Speaker in the Edo State House of Assembly and that is Rt. Hon. Frank Okiye.

“That is our only Speaker and we are ready on September 19 to vote Godwin Obaseki and Philip Shaibu again for continuity in Edo State”, Lady Uwa said.

Other section of the women were also seen raining curses on whoever that want to cause disaffection in the state.

Captions: The Women’s wing of Edo PDP at the State House of Assembly, yesterday.

Why Sen. Rand Paul says he will not get COVID-19 vaccine

ICYMI: Come for me after arresting bandits terrorising the country, Igboho tells FG

The Member of Parliament for the Tamale South Constituency, Mr Haruna Iddrisu, has advised President Akufo-Addo to go beyond his

Akufo-Addo Is A ‘Man Of His Words’ – Prang Paramount Chief