A student of the Ejisu Secondary Technical Senior High School is in big trouble after he allegedly attempted to take his own life on Tuesday night.

The student is currently responding to treatment in a hospital as police are investigating what might have influenced him to try to commit suicide, an act he tried to do in the assistant headmaster’s office.

Sources in the school disclosed that two male students, both of whom are in their second-year, stole an electronic stabilizer belonging to the school on Tuesday night.

The two students had successfully scaled the school wall with their booty, and they were in the process of heading for town to sell the stabilizer and make some money.

But luck eluded them as a taxi driver, who happened to be passing behind the school wall at the time, noticed the two boys and apprehended them immediately.

The driver then sent the two boys and the stolen item to the assistant headmaster of the school, who reportedly caged the two students in his office to spend the night.

After the assistant headmaster, who was identified as Kofi Appiah, had left for his house, one of the students drank a liquid soap in an attempt to end his life.

The student started experiencing stomach pains on Wednesday dawn so his colleague blew the alarm. The school authorities then rushed the student to hospital for treatment.

According to reports, the student later explained that he decided to end his life because he was innocent of the theft charge that had been levelled against him.

Meanwhile, reports indicated that the other student had been handed over to the police with the electronic stabilizer. The police are currently investigating the case. 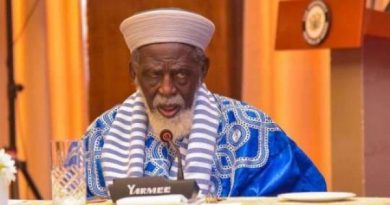