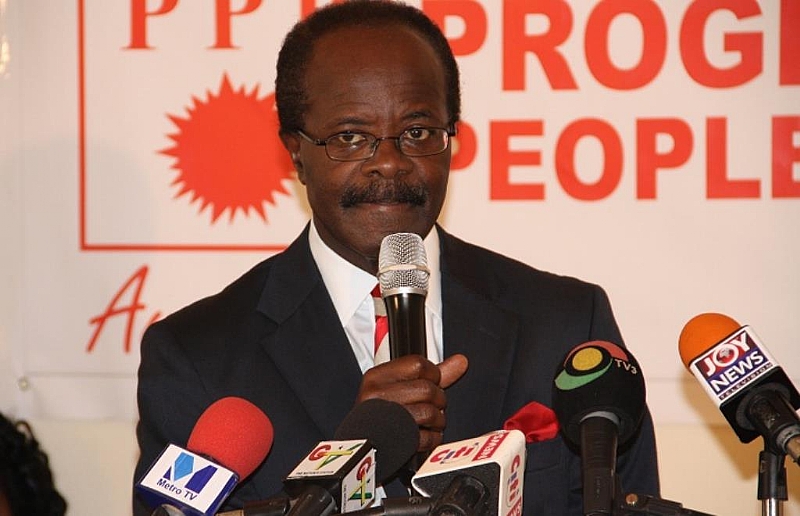 The Progressive People’s Party (PPP) has dispelled rumours that it has prevented its founder and only presidential candidate since the party’s formation, Dr. Papa Kwesi Nduom from contesting.

The National Secretary of the party, Paa Kow Ackon in an interview on Bolga-based Yem Radio’s PM Show on Wednesday, July 22, 2020 revealed that the party got an indication from Dr. Nduom that he may not lead the party again.

He explained that it was necessary for the party to state their former flagbearer’s intention not to contest because people who are interested in leading the party shy away from contesting “for fear that they may be defeated at the primaries by Dr. Nduom”.

The PPP issued a statement announcing that it has opened nominations for its flagbearership position ahead of the 2020 general election after holding the party’s Sixth National Convention virtually at its headquarters at Avenor on Saturday July 18, 2020 which saw the election of the National Executives of the party. The party in the statement encouraged interested persons “to express their interest publicly and on various party platforms”.

A portion of the statement which stated that the party does “not expect Dr. Papa Kwesi Nduom to become the party’s presidential candidate for the 2020 elections” caught the attention of the public with some media outlets reporting that Dr. Nduom has been barred from becoming the PPP’s flagbearer whiles section of the public attributes the alleged barring of the party’s founder to the woes of the financial sector cleanup that saw the revocation of license of GN savings and Loans owned by him.

Clarifying the issue on the PM Show, Mr. Ackon said “we issued a statement right after our election because we got a lot of calls from people wanting to know of our flagbrearer (Dr.Nduom). And so we did that. We got a feedback from Dr. Nduom that he may not contest the 2020 election.” He also dispelled claims that Dr. Nduom’s decision to not contest has anything to do with the revocation of his company’s license. “I cannot speak for him but the only thing I can say for now is that he may not contest. Even if you take the banking sector, Dr. Nduom has not committed any crime. I have followed the court proceedings and I can tell you on authority that GN, GN lawyers have been pushing for the case to be heard, the substantive case to be heard.” He stated. He further stated that “I can’t say it is because of what is happening in court that is why he may not contest. I think he would want other people to also show their faces.”

Mr. Ackon argued that the party does not revolve around an individual hence Dr. Nduom stepping aside as flagbrearer will not negatively affect the party’s performance in the 2020 elections. He expressed confidence of the party electing a leader who will enhance its chances in the December, 7 elections to replace Dr. Nduom. “It is so clear that the ownership of a party is not vested in an individual. It takes a collective. And that is why to apply to become a party you must have a representation, you must have founder or founders from each of the district in Ghana. And I must say that beyond Dr. Nduom, you know is birds of the same feather flock together. Dr. Nduom, his pedigree, his character and so on, there are thousands of that in our party. And Dr. Nduom was able to do well in 2012, 2016 through collective effort and I believe that many of the Flagbearers we may have going to the future will have a semblance of the traits of Dr. Nduom.”

The Progressive People’s Party was formed in 2012 by Papa Kwesi Nduom after he broke away from the Convention People’s Party in 2011. The party came third in the 2012 and 2016 general elections with 0.58% and 1% respectively of the total valid votes casted in each election. CPD Holds Training For All Health Professionals In Ghana