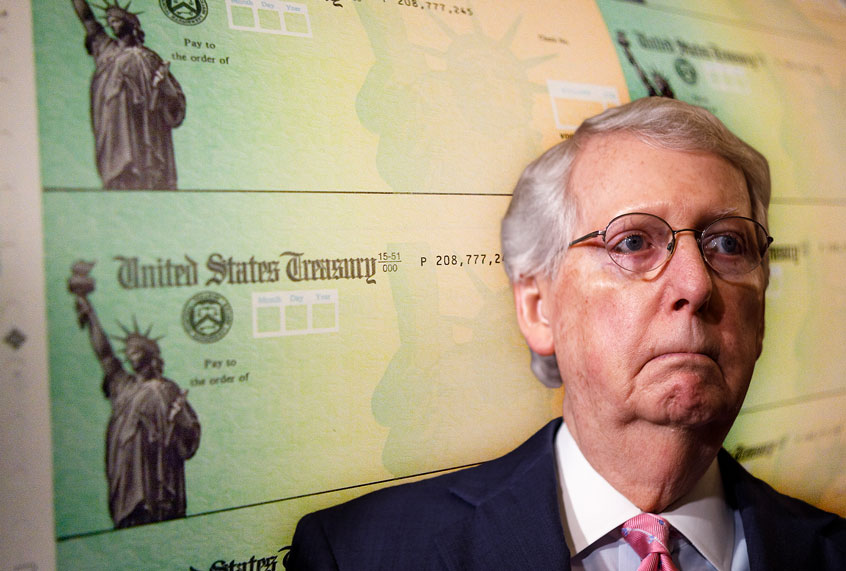 Protesters marched to the Washington home of Senate Majority Leader Mitch McConnell, R-Ky., on Wednesday to call for an extension of federal pandemic unemployment benefits before they expire next week.

The protesters were accompanied by a caravan of supporters, including a band on a trailer with a banner reading, “Mitch better have my money,” which is a play on the Rihanna song “B*tch Better Have My Money.”

“What has helped millions of people survive — just barely survive — has been this pandemic unemployment insurance of $600 a week,” Ana Maria Archila, one of the protest organizers, told WJLA. “It is all of our money. They should be giving it to people to survive instead of giving it to corporations that don’t need it.”

The protest was held as Republicans and the White House push to slash the benefit to less than $200 per week, setting up a confrontation with Democrats, who approved a full extension of the $600 enhanced benefits in a House bill passed way back in May.

“Republicans have had months to propose a plan for extending supercharged unemployment benefits, and they still have nothing to offer,” Sen. Ron Wyden, D-Ore., the top Democrat on the Senate Finance Committee, told NBC News.

The $600-per-week unemployment boost was approved as part of the CARES Act after aging state unemployment systems could not handle distributing millions of payments based on previous salary and only provide about 40% of a worker’s lost wages. Republicans want to slash the benefit, which expires next week, over concerns that it discourages Americans from returning to work at jobs which pay lower wages than the enhanced benefit.

Aside from what that says about the number of low-paying jobs in the U.S., it is also untrue. Though the majority of laid-off workers are receiving an average of 34% more than their previous salary, an analysis by former Treasury Department economist Ernie Tedeschi found “no evidence of any effect” on the labor market from the generous unemployment benefit. In fact, about 70% of the unemployment recipients who returned to work in June went back to jobs which paid less than the benefit.

During a recent Senate Finance Committee hearing on the benefit, the star Republican witness, a small business owner whose workers complained their laid-off colleagues were earning more from unemployment, admitted that he had no trouble getting workers to return.

“I was very happy that no one refused to come back,” he said, “and everybody when I talked to them was in agreement and said, ‘Fine, we’ll see you tomorrow.'”

Many workers simply cannot find a job because job openings are down about a quarter from pre-pandemic levels, and states that reopened too early are now once again shutting down bars. as well as movie theaters, gyms and salons.

While there is an absence of evidence to back the Republican claim that the benefit is a disincentive to workers, a growing body of evidence does show that the generous benefit has helped prop up the U.S. economy during the severe downturn.

An analysis by JPMorgan Chase found that additional spending by unemployment recipients helped alleviate a similar drop in spending by workers still on the job.

Tedeschi, the former Treasury economist, estimated that letting the benefit expire would cause the economy to shrink by 2% and cost the U.S. an additional 1.7 million jobs. Even a partial reduction to $300 per week would shrink the economy by 1% and cost about 800,000 by the end of the year, his analysis showed.

“Almost overnight, their incomes would be cut in half. In states like Arizona, Louisiana, and Mississippi, the typical worker would lose 75% of her benefits,” he wrote. “And in states with large populations of unemployed — states like Nevada that are heavily dependent on industries like tourism — losing the [federal benefit] would be equivalent to losing a tenth of *all* state personal income.”

“These unemployment benefit checks are really doing a large job in propping up spending by these unemployed households,” Joseph Vavra, a University of Chicago economist who has studied the impact of the benefit, told The New York Times.

If they expire, “there’s a good chance that what is now an unemployment problem becomes a foreclosure crisis and eviction crisis,” he added.

But there are more than three times as many unemployed people as there are job openings.

“Cutting off the $600 cannot incentivize people to get jobs that aren’t there,” Heidi Shierholz, the former chief economist at the Labor Department who now heads the left-leaning Economic Policy Institute, told CNBC.

“The unemployment insurance is absolutely essential, he’s right on that. And if he wants to negotiate some alternative figures, fine, put them on the table. Let’s talk about them,” he told the outlet. “But don’t keep twiddling your thumbs while the American people are burning from a virus and a tanking economy.”

Are Republicans even trying to defend Trump? Or just doing Vladimir Putin’s bidding?

Woman for allegedly stabs mother-in-law to death in Niger