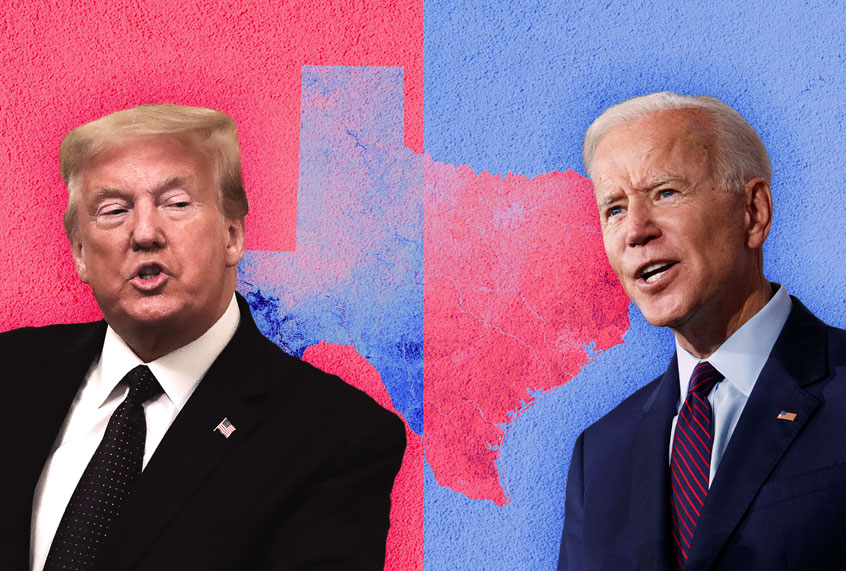 If Democrats are Charlie Brown – and they could be – Texas is the political football yanked away at the end of every game. Promising candidacies continue to endure painful yet predictable losses, which clock in close enough to hold on hope for next time.

The polls are teeing them up again in 2020. A new CBS News/YouGov survey finds President Donald Trump up one point over former Vice President Joe Biden among Texas voters at 46% to 45%. That’s well within the margin of error.

And that poll is not an outlier. An average of the eight Texas public polls since May shows Biden and Trump in a statistical tie, with Biden up by 0.3 points. A Real Clear Politics average of five recent polls also rules the race a tie, and FiveThirtyEight’s weighted average puts Trump up by only 0.1 points.

A few factors are driving the numbers, including the heavily-criticized response of Republican leadership to the coronavirus pandemic as cases surge across the state. Houston has turned into the country’s most intense hotspot. In a recent Dallas Morning News/UT Tyler poll, only 38% of Texans approved of Trump’s performance.

Though Texas has been over-hyped as a swing state, Democrats have posted numbers unmatched in a generation. This is sparked by accelerating shifts across a number of key political demographics, such as increases in Hispanic voters. Perhaps less well documented is an injection of college-educated white voters in the state’s most populous cities: Austin, Dallas, Houston and San Antonio.

Texas, however, is a massive state, and flipping it would likely require an immense well of resources and time, which may be better placed elsewhere. Besides, the state is not an electoral tipping-point: The race can be won on other more manageable battlegrounds.

Though the Biden campaign has engaged voters across the state, holding virtual roundtables, community meetings and calls, it has so far shown a reluctance to mess with Texas. In a statement to Salon, the campaign suggested it would let voters make the call for themselves, pointing to Trump’s botched response to the pandemic.

“Texans won’t forget Trump’s inability to lead our country during this pandemic, and this fall they will have the opportunity to make a change and send Joe Biden to the White House,” the campaign said.

“Democrats like to pretend Texas is on the table, but they know that’s a joke – just ask Governor Wendy Davis, Senator Beto O’Rourke and President Hillary Clinton,” she told Salon in an email, in an attempt to comedically mock the defeats of three recent high-profile candidates.

Zager has a point: Pundits who predicted upsets got three wake-up calls in a row. But election experts do not point to past results. They point to current data, and they point to trends.

In that sense, Zager’s black-and-white claims belie the troubling reality facing the Trump campaign: The margin of victory shrank considerably between each of those races.

Clinton’s candidacy, or perhaps Trump’s vulnerabilities in the heavily-Hispanic state, built up more buzz in 2016. However, Clinton never got within three points, coming closest in early August on the heels of Trump’s disparaging remarks about a Muslim Gold Star family. When she lost the state by nine points, she became the first Democratic president to come within single digits since the 1990s. It was one of the 10 tightest wins that year for Trump.

The gap narrowed again in 2018 with the Senate candidacy of former Rep. Beto O’Rourke, a spirited, resolute young politician whose image seemed to capture something central about the generational changes across the state. He sprung to the national stage only a few months before the election, pulling tens of millions of dollars in donations from around the country. Though he ran a tight race, O’Rourke came up three points short of Republican opponent Ted Cruz.

What’s more: This year’s Senate race may be competitive, too. In the CBS/YouGov poll, Sen. John Cornyn was up six points (against Royce West) or eight points (against MJ Hegar) against his possible Democratic challengers. Recent state polling shows that about one-third of Texas voters are still undecided, even about their 18-year incumbent.

Also, the Cook Political Report anticipates that as many as six Republican-held House seats may realistically flip in November. In other words, at least certain races in Texas are very much in play for Democrats.

Today, Larry Sabato’s Crystal Ball project at the University of Virginia lists Texas as “leans Republican.” But the group says that is not a lock.

“We still think Trump is favored in Texas,” Kyle Kondik, the site’s managing editor, told Salon. “But the numbers are what they are.”

“The state is becoming more competitive, and the Democratic growth is being driven to no small degree by the migration of white voters with four-year college degrees into the Democratic Party – or at least into the anti-Trump column,” he continued. “We see this kind of trend in highly-educated places across the country, and that includes a lot of suburban congressional districts in Texas

“At this point, I think our best guess would be that the presidential race would look a lot like the Senate race in 2018 – close, but with a Republican edge,” Kondik added. “However, even that would be close for comfort for Republicans, who cannot put together a plausible Electoral College majority without Texas.”

Asked whether this trend could nudge Texas into the toss-up column, Kondik said: “If it still looks like this come Labor Day, quite possibly.”

Pulling back the foliage of “Big Flower Fight,” from the eye-popping designs to the fairy tale final

An Economist, Kwame Pianim says without collective ownership of the vision by Ghanaians, the Ghana Beyond Aid agenda is likely