A gender advocacy group, Joan Agha Foundation, has called on the Nigerian Federal Government to accord the nation’s women respect and dignity they deserved.

In her remarks, the convener of the annual lecture, Agha noted that “the future of Nigeria’s economy is in its women’s active involvement in entrepreneurship activities and has become expedient that the Nigerian government embraces women entrepreneurship in order to accelerate the pace of the economic growth and development.”

Quoting Koffi Annan, the late former Secretary-General of the United Nations, Agha who charged all Nigerian women to brace up said: “when women thrive all of the social benefits and succeeding, generations are given a better start in life.”

The annual lecture; which was well attended by a crop of successful entrepreneurs and professionals of varying degrees which include, Mrs. Ogunlewe Olayinka who represented Lagos State Commissioner for Women Affairs, Mrs. Habiba Balogun, Director and Principal Consultant of Habiba Balogun Consulting Limited as the keynote speaker; Mr. Andy Otike- Obaro, Chairman, Board of Trustees of Joan Agha Foundation; Dr. Adeyelu Olusola, a medical consultant; and Mrs. Ifeoma Nwuke, the Managing Director of Simply Gifts and Interiors, Dr. Omopeju Afanu, the Founder and Chief Executive Officer of  Cooper house Hospitality Limited and Mrs. Violet Abdulkadir, the Managing Director of Time- Tell Nigeria Limited as panelists; provides a platform and unique opportunity for women entrepreneurs to learn from successful women entrepreneurs, network with other entrepreneurs to collaborate and partner with each other and to inspire women for greater leadership and managerial impact.

In a related development, Mothers And Marginalised Advocacy Centre, MAMA Centre, recently commended the passage of Sexual Harassment Bill by the Nigerian Senate, calling for prompt Presidential assent to transmit the Bill into law.

The Centre noted that the passage of the Bill shows the sincere commitment by the upper chamber to address the plights of Nigerian women and girls, who constitute the major victims of the growing trend of sexual harassment, abuse, and molestation in the country.

In a statement signed by the Executive Director, MAMA Centre, Barr. Ola Onyegbula stated that if signed into law and fully implemented, the new legislation would safeguard women and girls from years of traumatic and injury-inflicted moments allowed to drag or go unpunished in most cases due to inadequate policy and judicial interpretation.

“We are also happy that the new legislation sanctions unprecedented sexual harassment in educational institutions by making it an offense and removing mutual consent as a defense in the prosecution of sexual harassment while making the formal walls conducive centres of learning.

“We, therefore, call on President Muhammadu Buhari to as a matter of national urgency, assent to the Bill.”

Onyegbula further encouraged the State Houses of Assembly to follow suit in rapid adoption and full implementation of the Bill, as a demonstration of sincere commitment by the State Governments to secure the health, emotional and physical well-being of women and girls in the country.

“We further call for the strengthened capacity of law enforcement agencies to understand provisions of the new legislation to efficiently interpret and apprehend suspected offenders.

“We also call for prompt passage into law, the Gender and Equal Opportunities Bill, at the Federal and State levels to domesticate the CEDAW and AU Women’s Protocol; adoption and full implementation of the Violence against Women Bill at all state levels.”

She recalled that MAMA Centre had through various programmes and activities as well as widely-published media motions, joined other well-meaning organisations and individuals to condemn sexual harassment in all forms, with strong demand for appropriate policy response in institutionalizing proactive measures and enabling reporting system to support the judicial interpretation of processes and laws to adequately sanction offenders in mitigating recurrence incidence at all levels. 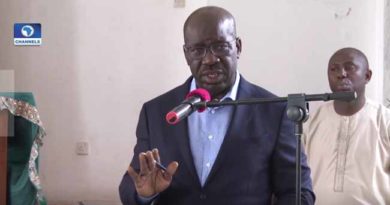 I Will Increase Minimum Wage If We Improve On Revenue, Obaseki Tells Workers – Channels Television

From girl-next-door to multiple award-winning African artiste! Afropop singer and songwriter, Yemi Alade has achieved milestones many may have presumed