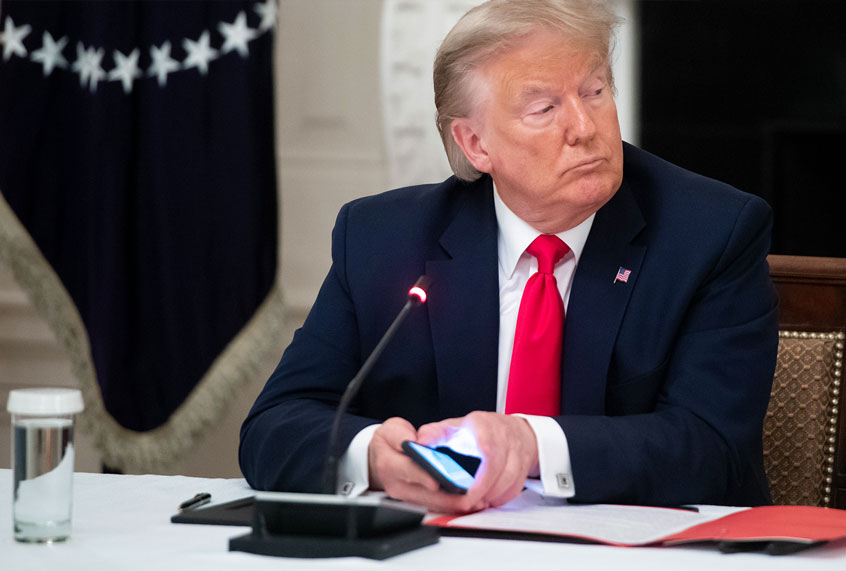 President Donald Trump received a second extension to submit his annual financial disclosure after the White House claimed he was too busy focusing on the coronavirus pandemic to submit the paperwork.

Trump’s financial disclosure was due more than a week ago after he was already granted a 45-day extension to submit the disclosure, which details his personal finances. However, the disclosure was not filed, and no explanation was given by the White House.

A White House official told The New York Times on Wednesday that Trump had been given “an additional 45 days” by the Office of Government Ethics to file the disclosure. The report is “complicated,” and the president has “been focused on addressing the coronavirus crisis and other matters.”

The Times noted that Vice President Mike Pence, who heads the White House coronavirus task force and has been more directly involved in the day-to-day response to the pandemic, was able to file his disclosure report by the deadline, as required. Pence’s disclosure revealed that he raised nearly $500,000 for a legal-defense fund to pay his bills in former special counsel Robert Mueller’s investigation.

The delay around Trump’s disclosure report follows “conversations between ethics officials and representatives for Mr. Trump about a draft of the filing,” according to The Times.

The delay also comes as Trump fights to keep his financial information and tax returns under wraps. The Supreme Court on Thursday ruled that Trump does not have immunity from subpoenas seeking his tax returns and financial records. It kicked the issue to lower courts to decide, meaning that the documents may remain private until after the election. Trump vowed to “keep fighting” the lawsuit, even though he previously claimed that he would voluntarily release his tax returns.

Last year, Trump’s financial disclosure raised questions, because it did not include the free legal services provided by his personal attorney, Rudy Giuliani.

The disclosures are the only public documents that reveal the goings-on in Trump’s business empire, from which he has refused to divest. The 2019 disclosure showed that revenues at Trump’s businesses fell, including a nearly 10% drop at his beloved Mar-a-Lago resort in Palm Beach, Fla.

It also showed that the Trump Organization had halted its international deals, resulting in a further financial slump. The disclosure also revealed that Trump owed at least $315 million in loans.

The White House claims over the latest delay raised additional questions. The claim that Trump’s focus was on the pandemic is contradicted by his “Twitter feed,” argued former federal prosecutor Elie Honig, where Trump has posted fake videos of “racist babies” and shared videos of his supporters shouting “white power.”

“Trump’s annual financial disclosure report was due in May but he was given a 45-day extension until June 29. It’s now July 9 and he still hasn’t released it,” former Bill Clinton aide Keith Boykin tweeted. “Yet he has time to tweet, golf, hold campaign rallies and avoid coronavirus task force meetings.”

Norm Eisen, who served as the White House ethics chief under President Barack Obama, alleged that the excuse was patently false.

“I oversaw Pres. Obama’s financial filings in a time of two wars & the Great Recession. So I can tell you that the excuse Trump is giving is a lie. His lawyers and accountants prepare this form, not him,” he wrote. “Why is he lying? The usual: something to hide.”

Without stimulus, 12 million Americans will owe more than $5000 in missed rent by December: analysis

Aggrey, who pleaded guilty was charged with two counts of conspiracy to crime and extortion. The court, presided over by