Akwa Ibom State Chapter of All Progressive Congress (APC) has faulted President Muhammadu Buhari over what it described as “unfamiliar method” adopted in appointing people from the state to political offices without reference to the party.

Specifically, the party kicked against the foreign envoy nominee, Oboro Effiong Akpabio, who the party claimed was not from the State.

In a statement signed by its Publicity Secretary, Nkereuwem Eyongekere, the party noted that such an appointment was already unsettling members and weakening the threshold of the party in the state ahead of 2023 as staunched members who sunk in resources have been sidelined in the scheme of things.

Eyongekere maintained that Buhari has remained adamant despite several correspondences drawing his attention to the lopsided appointments from the state.

He said, “In a petition from APC Akwa Ibom State Chapter duly signed by the State Chairman, Hon Iniobong Titus Okopido recently sent to the presidency, the Chapter succinctly drew the attention of the presidency to such anomalies that had been on the recurring note right from the first term of Mr. President till date.

“The State Chapter in the said letter lamented that even in the second term of the administration President Muhammadu Buhari which the party in the State had expected to benefit from the robust relationship of 2019 elections and for obvious reasons that he will learn from the mistakes of his first term.

“But unfortunately, the news of every new appointment from Akwa Ibom state has been so nerve-wracking and disquieting to the members of APC in the State, thus weakening the threshold of our party in the state as genuine members who have sacrificed their useful resources are completely cheated out.

“The letter underscored among such political appointments, is that of Mr. Oboro Effiong Akpabio, Ambassador-designate, as one of the persons the party is not very sure if he is from the state as he is unknown to the party and its members.

“The letter noted if such a trend is not discontinued, will surely discourage members from giving their best to make APC work in Akwa Ibom State and thereby hampering the build-up towards 2023.

“On emphasis and for the overall interest of the members of APC in the State, the letter underpinned a healthy and intimate relationship between the government at the centre with the State Chapter. And the State Chapter should be readily consulted by the federal government while making appointments to strengthen the base of loyalty by members.

“This is done, it will help to reposition the Party towards growth and development as the next elections will still be on the basis of party, hence the  need to empower members within.” 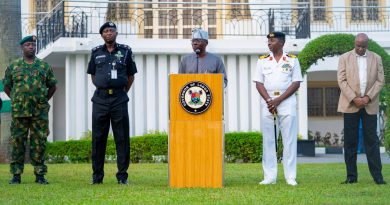 Super Eagles player, William Troost-Ekong, is living his life away from social media and when it comes to his family,