The Federal Road Safety Corps (FRSC) is to create a special task force for enforcement of vehicle number plates and driver’s license to sanitize driving culture in Rivers state, an official has disclosed.

The new Sector Commandant in the state, Corps Commander Salisu Galadunci, made this known during a visit to the Secretary to the Rivers State Government (SSG), Mr. Tammy Danagogo, on Monday in Port Harcourt.

He said the initiative would ensure the safety of lives and property for road users as well as enhance revenue generation for the state.

Galadunci also commended the state government on its various contributions towards the services of the command.

“I am aware of the cordial relationship with us, the latest being the donation of five new JAC brand of Pick-Up vehicles to the command.

“I promise to further build on this relationship to enhance sanity in the driving culture of residents of the state,” Galadunci said.

The Sector Commander also said that the Replacement Machine Centre for Number Plate has been established in the state, adding that provision of office accommodation would enhance it quick commencement.

Responding, Danagogo expressed delight over the laudable programmes envisioned by the new Sector Commander and applauded him on his readiness to serve.

He also said that Gov. Nyesome Wike has approved to assist the Corps in setting up the Replacement Machine Centre for Number Plate.

According to him, the accommodation and other necessities have also been put in place in readiness to kick-starting its operations.

Danagogo promised to do a follow up with the governor to come up with a date for commencement of the centre. 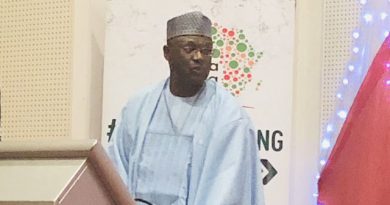