The World Bank has approved $750 million credit support for Nigeria’s power sector, saying that the country loses about $28 billion annually to power shortages.

Meanwhile, the Senate Investigation Committee on Power has reported that only two  of the six power generation companies, GENCOs in Nigeria are meeting targets. The two are Transcorp Power and Geregu Power.

In a statement announcing the support, the World Bank said the loan, titled, “Power Sector Recovery Operation (PSRO) of $750 million,”  is to improve the reliability of electricity supply, achieve financial and fiscal sustainability, and enhance accountability in Nigeria’s power sector.

However, the Bank stated:  “About 47%  of Nigerians do not have access to grid electricity and those who do have access, face regular power cuts. In addition, the economic cost of power shortages in Nigeria is estimated at around $28 billion – equivalent to two percent of its Gross Domestic Product.

“Getting access to electricity ranks as one of the major constraints for the private sector according to the 2020 Doing Business report. Hence, improving power sector performance, particularly in the non-oil sectors of manufacturing and services, will be central to unlocking economic growth post COVID-19.”

According to Shubham Chaudhuri, World Bank Country Director for Nigeria,  “The lack of reliable power has stifled economic activity and private investment and job creation, which is ultimately what is needed to lift 100 million Nigerians out of poverty.

“The objective of this operation is to help turn around the power sector and set it on a fiscally sustainable path. This is particularly urgent at a time when the government needs all the fiscal resources it can marshal to help protect lives and livelihoods amidst the COVID-19 pandemic.”

The Senate House committee on Power, Gabriel Suswan, who raised the performance issue across the GENCOs while addressing stakeholders at an investigative hearing in Abuja, cited documents obtained from the Bureau of Public Enterprise, BPE, said that current operations in the power sector cannot attract needed private sector investment.

On GENCOs’ performance, the BPE had stated that Transcorp Power surpassed the five-year performance agreement target (670mw) set by the BPE at the hand over of Ughelli Power by achieving 680.83mw.

Transcorp management says that by 2024, it expects to generate 2500mw through acquisition of Brownfield Thermal Projects, the expansion of the existing Transcorp Power Plant and greenfield renewable energy projects which all together add up to 25% of the power generated within the country.

The Federal Government had often threatened to reverse the entire power privatisation exercise over the non-performance of the operators.

In its defence, the GENCOs blamed inefficiency in the Transmission Company and DISCOs on current woes in the sector. Also, Suswan accused Government, Ministries Department and Agency, MDAs of owing DISCOs N98 billion. 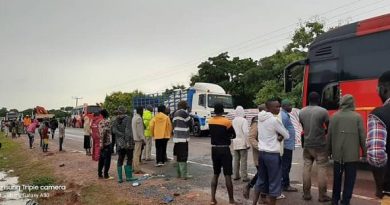 I was at the seen when the incident happened the car over took us and few seconds it jumped out of the road ......May God bless very one that show concern

Civil society groups in the country have deepened their stands on government to suspend the controversial Agyapa royalties deal. According