…To rule on competence of expelled members, eligibility of Ize-Iyamu

A Federal High Court in Benin, will on Monday, rule whether  Pastor Kenneth Asekomhe, factional vice chairman of the Edo State All Progressives Congress, APC, and Matthew Iduoriyekemwen, disqualified governorship aspirant of the party, have the locus to sustain legal action  against the party, both having been expelled from the APC.

This is just as the judge warned lawyers and interested parties in the matter against making any attempt to bribe him.

Both Asekomhe and Iduoriyekemwen, who are plaintiffs in a suit they filed seeking to stop the party from conducting governorship election primary in the state using the direct method, were expelled from the APC last week for violating the constitution of the party by going to court without first exhausting internal mechanism of the party.

Meanwhile, a frontline governorship aspirant on the platform of the APC Pastor Osagie Ize-Iyamu, will know his fate on June 25 over the waiver granted to him to contest by members of the National Working Committee (NWC) of the governing party.

The presiding judge, Justice Emmanuel Ahamioje, gave the date for ruling at yesterday’s sitting, after submissions of the counsel to the parties, but warned lawyers, politicians and their agents against possible attempts to bribe or blackmail him over the matter.

Justice Ahamioje said: “Do not give money to anybody on my behalf. I will never send anybody to collect money for me.”

APC’s NWC fixed June 22 for Edo governorship primary election, using direct mode, with Ize-Iyamu and a former Deputy Governor of the state, Dr. Pius Odubu as contestants after an ex-Chairman of Oredo Local Government Council of Edo state, Osaro Obazee had stepped down.

When the case at the federal high court came up yesterday, Counsel to the 2nd defendant in the suit (the National Chairman of the All Progressives Congress, Adams Oshiomole), Roland Otaru, prayed the court to quash the case stating that the parties involved had been screened out of the primaries while others were expelled from the party.

The presiding judge, Justice Mohammed Umar, having listened to his arguments,  adjourned the case till Monday 22, June. The Judge also dismissed the application filed by Pastor Osagie Ize-Iyamu, Pius Odubu and Osaro Obazee, seeking to be joined in the suit.

Counsel to the applicants, Douglas Ogbankwa had prayed the court that all the aspirants having been cleared by the party for the primaries coming up on the 22 of June should be allowed to be joined in the suit. He said it was their rights and that anything short of that was a breach of their fundamental human rights. 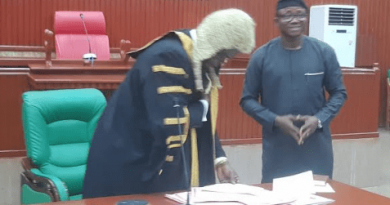 Dr Franklin Asiedu-Bekoe, Director of Public Health at the Ghana Health Service (GHS) says people who are vaccinated with the