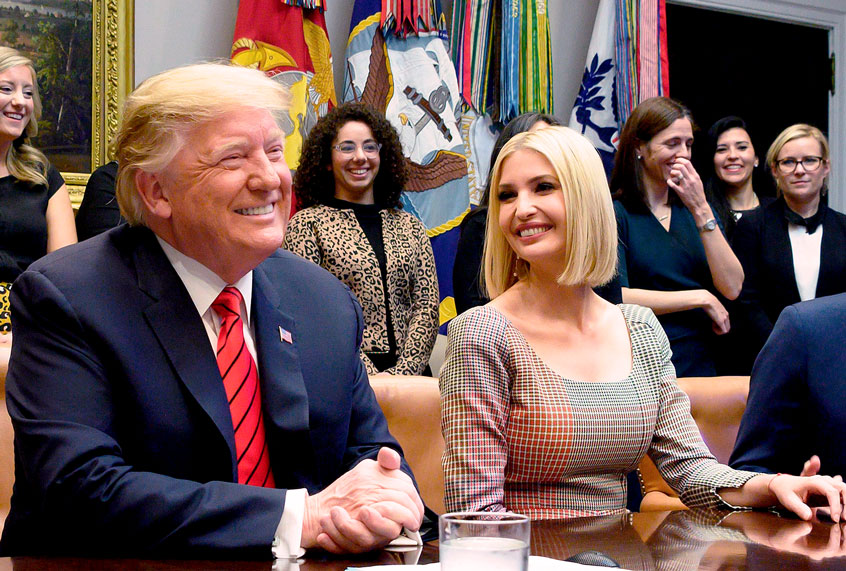 Trump, who repeatedly excoriated former Secretary of State Hillary Clinton for her use of a private email server, sought to use the 2018 killing to divert attention from reports that Ivanka Trump had sent hundreds of emails to White House aides and Cabinet officials using a personal email account in violation of federal records rules, Bolton’s new book claims.

“This will divert from Ivanka,” Trump said at the time, according to an excerpt from the book published by The Washington Post. “If I read the statement in person, that will take over the Ivanka thing.”

Trump then issued a statement riddled with exclamation points, which disputed the CIA’s findings that bin Salman had ordered the killing.

“It could very well be that the Crown Prince had knowledge of this tragic event — maybe he did and maybe he didn’t!” Trump wrote. “That being said, we may never know all of the facts surrounding the murder of Mr. Jamal Khashoggi. In any case, our relationship is with the Kingdom of Saudi Arabia.”

After U.S. intelligence agencies concluded that bin Salman had ordered the killing, a damning U.N. forensic report called for the crown prince to be investigated last year after finding “credible evidence” that he and other senior officials were responsible for the murder.

White House ethics officials discovered that Ivanka Trump had used a private email for official business throughout “much of 2017,” according to The Washington Post. Some aides were “startled by the volume” and “taken aback” after she claimed that she was not familiar with some details of the federal records rules.

Former White House ethics chief Walter Shaub, who resigned about six months into Trump’s first term, highlighted several emails released in response to a Freedom of Information Act lawsuit by the watchdog group American Oversight in 2017 suggesting Ivanka’s scandal was even worse than it first appeared.

“Well now, this is disturbing. Ivanka Trump didn’t become a government employee until March 29, 2017. This email is dated four weeks earlier than that. Why is she appearing to conduct government business in this email she sent while still a private citizen?” he tweeted, pointing to an email Ivanka sent to Secretary of Education Betsy DeVos.

“A MONTH before Ivanka Trump became a government official, she refers to a WHITE HOUSE OFFICIAL as her own ‘chief of staff.’ Wow! This is really crazy stuff,” he said about another email.

Bolton’s upcoming book, “The Room Where It Happens,” has sent Trump into multiple fits of rage on Twitter. The president has claimed that the book not only contains classified information but also is filled with false claims. The Department of Justice asked a federal court Wednesday to issue an emergency order to block the release of the book, which has already been distributed, alleging that it contains classified details.

The book reportedly confirms that Trump pressured Ukraine to hurt Joe Biden’s candidacy, the key claim in the impeachment case against the president. Bolton did not testify during the impeachment proceedings, even though other lower-level officials broke with the administration and agreed to be interviewed.

The book further alleges that Trump both asked Chinese President Xi Jinping to help him with his 2020 election in 2019 and defended China’s “re-education camps,” where the country is holding up to 1 million Uighur Muslims, according to The Post.

Bolton, who stayed silent during the impeachment proceedings, faults Democrats for not investigating how Trump promised Turkey to sink an investigation into a state-owned bank and allowed embattled Chinese telecom ZTE to do business with U.S. firms despite security concerns. Bolton said he took his concerns to Attorney General William Barr, who he claims was also worried about the appearances created by Trump’s actions.

“Had Democratic impeachment advocates . . . taken the time to inquire more systematically about Trump’s behavior across his entire foreign policy, the impeachment outcome might well have been different,” Bolton wrote.

Rep. Adam Schiff, D-Calif., who led the Democrats’ impeachment case, criticized Bolton for not coming forward when Congress was investigating the president’s conduct.

“When Bolton was asked, he refused, and said he’d sue if subpoenaed. Instead, he saved it for a book,” Schiff tweeted. “Bolton may be an author, but he’s no patriot.”

“What if we have a real crisis like 9/11 with the way he makes decisions?” Kelly allegedly asked.

“He is so full of sh*t,” Pompeo wrote in a note he slipped to Bolton in 2018, according to an excerpt published by The New York Times.

“I don’t think he’s fit for office,” Bolton told ABC News in an excerpt of an interview set to air on Sunday. “I don’t think he has the competence to carry out the job. There really isn’t any guiding principle that I was able to discern other than what’s good for Donald Trump’s re-election.”

Trump alleged on Twitter that Bolton’s book is “made up of lies & fake stories.”

“Never had a clue, was ostracized & happily dumped,” Trump wrote. “What a dope!”

What’s antifa? Journalist Talia Lavin on the reality behind the media’s “pernicious lies”

On This Day 2 Years Ago, Nigeria Lost An Irreplaceable Leader, The Iyasele Of Esan Land Chief Tony Anenih Aka. "Mr Fix It" God Be With You Till We Meet On Resurrection Morning Chief. ... See MoreSee Less

May the soul of our honourable leader and also a leader of many nation's high chief TONY IYAKON ANENIH, and the souls of all the faithful departed through the mercy of God continue to rest in perfect peace a very bigger amen oooooo.R.I.P our dear papa.

May the soul of this great man that has a legendary legacy lives on to eternity. Amen 🙏

May his soul rest in the bosom of the Lord Amen

Continue to rest in peace sir .

He was a disgrace to the entire esan land,particularly those of us from uromi.

In fact his demise was a releave from godfatherism and massive wickedness,,proudly uromi

Some can not rest in peace but in peices, he is ONE of them... Evil consume evil, he is nothing to write about... Wasted generation, power for their belly and pocket. #ShameONhim/ThEm