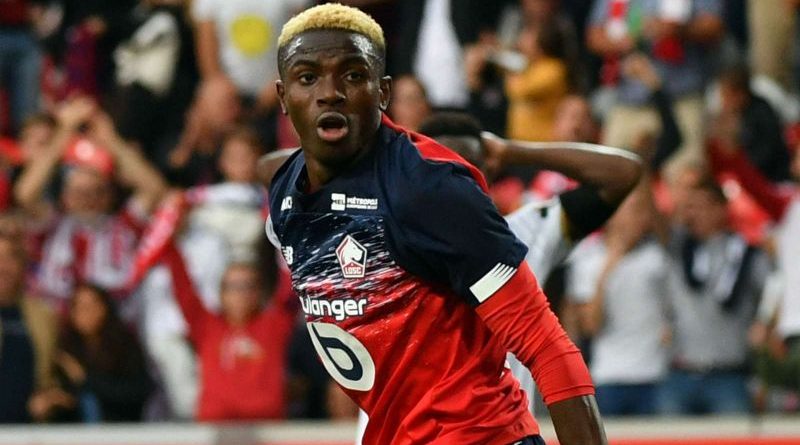 Victor Osimhen’s dad, late Patrick Osimhen, will be laid to rest in Lagos, on Tuesday, June 23, the family has announced.

According to burial arrangement made available by the family, Pa Osimhen, aged 80, will be interred according to Christians rites at a private cemetery, Omega Memorial Garden, Ojodu, Lagos.

He lost his wife, Mrs Christiana Osimhen, in 2001.

The Osimhen family from Uromi, Edo State, said they would adhere strictly to the social and physical distancing directive by the Lagos State government during the burial ceremony.

Meanwhile, Osimhen has been the subject of multiple offers according to Lille’s president, Gerard Lopez.

The 21-year-old scored 18 goals in 38 appearances for the Ligue 1 outfit before the season in France was prematurely called off.

Osimhen only joined Lille last summer from Belgian side, Charleroi, but has already attracted interest from across Europe.

Osimhen rejected Arsenal’s advances earlier in his career and the Gunners are on a long list of clubs tracking him.

Liverpool, Real Madrid, Barcelona and Napoli are also interested, but Lopez is seeking a similar fee to the one that saw Pepe leave for north London if Osimhen is to depart the Stade Pierre-Mauroy.

Please, help out, is this really for Birthday or Burial? ... See MoreSee Less

HERE ARE SOME OF THE PROMINENT NAMES THAT HELPED SEND BUHARI TO ASO ROCK IN 2015:

These people went to school. Many are professors. Some claimed to have direct access to God.

Some are gifted with "prophesies".

They were more than 20 years old in 1983 when Buhari shot himself to power.

They saw Buhari destroy the economy in 1983

They saw the role Buhari played in Abacha's government.

They read all the threats of violence by Buhari against the nation.

They saw Buhari harass Lam Adesina the Oyo State Governor due to Fulani herdsmen conflicts with locals in Oyo State.

They saw Buhari lead the sharia protest that claimed the lives of innocent Nigerians in 2001.

They saw Buhari and his minions open the gate of hell on innocent Nigerians when he lost the presidential election in 2011.

If Buhari was not speaking and defending his Fulani heritage he would be fighting to defend his religious heritage.

Never for once did he defend Nigeria or gave interview on how to rebuild the economy, education, power, health etc.

They saw everything this man did. They knew him too well to miss the little details of his violent life.

But they were united in hatred.

Hatred for Goodluck Ebele Jonathan. One among the few Nigeria leaders that actually wanted Nigeria to work.

They exploited his humility.

They exploited his kindness.

They exploited his humanity

They danced and made merry in Ojota. They ate, drank and danced away the destiny of a nation.

But the people did not see the moral paradox because you see - hate is a unifying factor.

They mobilised thugs to stone a sitting President.

They harassed his family wherever they went.

Because they are from the hated minority who must NOT be king.

For Kings must come from the Fulani lineage. Jonathan is Ijaw. Ijaws should not be Kings.

Jonathan must not loot also.

For looters must come from enablers of evil.

Amongst whom are Pastors and Prophets

It is possible many Nigerian "intellectuals" are working with fake certificates.

The tragedy of a people

The tragedy of a country

Whether you are pagan - it doesn't matter.

Whether you are Christian - it doesn't matter

Whether you are a Moslem - that is not important

Whether you are a traditionalist - you all are needed

For a country without soul is dangerous to human habitation.

And a nation without conscience is a curse to its people.

We all are standing on the podium of history.

Surely our children will read the roles we played in the salvation or annihilation of humanity ... See MoreSee Less

Is so bad,God will see us through.

How Long Can We Continue To Dwell In Ignorance. We Are Quick To Write With Out Knowing The History. I Would've Ordinarily Ignored Ur Post As Usual But Is Imperative I Bring Ur Ignorance To Bare. BUHARI, I REPEAT, BUHARI WAS NEVER INVOLVED IN PLOT OR COUP. IT WAS IBB AND CO. THAT TOPPED THE GOVT. OF SHAGARI. They Looked For Buhari To Head The Govt.Bco Of His Integrity. His Govt. Was Topped Again Bco He Was A Treat To Them(ibb]. Go And Find Out.

They know well that so called Buhari , is pharaoh and a devil

You are correct,that is why l said earlier political parties is not our problem but the practioners of the political system.these same persons are still in government system hiding under political parties deceiving us.if we must move forward the construction of 1999 must be amended before the next presidential election.whoever that want to contest into elective position must resign three months to

Law of pertern , keep repeating the same thing you're bound to get the same result True federalism is the answer

How is this our problem now when we have bigger issues at hand.....Buhari isn't the only cuprite, lots of former senators, reps governors have questions to answer us with time.

You have said it all, Nigerians wake up from your slumber and build a future for our children.

But today who is crying.

The 12 Best Reusable Shower Caps To Extend Your Hairstyles

Courtesy of Brands If you’re big on rocking protective styles, maintaining your blowout, and extending the life of your curls,