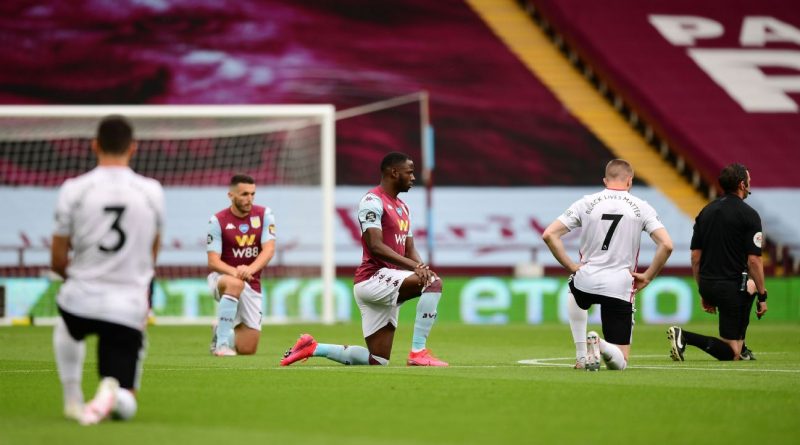 Even when everything looks and feels different, some things never change. One hundred days after the Premier League was forced to shut down because of the coronavirus pandemic, English football returned with an easy Manchester City win against Arsenal and another showcase of David Luiz‘s ability to mess things up.

Nobody was there to see it, though. Just like in Germany, Italy and Spain, the Premier League is back, but only behind closed doors. So City’s win, which means Liverpool cannot win the title at Everton on Sunday, was played out in front of fewer than 300 onlookers including club staff, media and safety stewards — all of whom had to undergo temperature checks before entering the ground.

But with the league halted in mid-March with 92 games still to play, a return to action in a sterile environment dominated by strict safety measures, one-way systems to ensure social distancing and, crucially, no fans was the only way to get the Premier League show back on the road to a conclusion.

The experience felt as weird as it looked, though. Deserted streets outside the Etihad Stadium, stewards stood outside locked turnstiles and a stadium divided into Green, Amber and Red Zones — it’s football, but not as we know it.

The next time fans feel they are being priced out of the game, they will only need to point to this unprecedented period to prove they are the lifeblood of the game.

Two City fans from Warrington, a 20 mile drive away, turned up in their shirts to eat at the Fish and Chip Shop outside the Etihad. They knew they couldn’t watch the game, but they simply had to play out their usual pre-match ritual before driving home to watch on television. Another fan stood outside the stadium entrance, playing Blue Moon on a saxophone, but that was it. Fears of fans turning up and causing a scene were certainly unfounded.

Football supporters in the U.K. remain split on the issue of games being played again at a time when the country’s daily coronavirus death rate continues to be a three-digit number. Players have also voiced their concerns over safety, some fans have taken to social media to accuse clubs of putting money before health and there are those who believe that live football without spectators is simply not worth watching.

The Premier League’s “Project Restart” has been given full government backing, however, with the view within the corridors of power that the return of football will not only signal important steps on the road to recovery, but also help raise the morale of a nation.

But there can be no escaping the grief and loss experienced by many. Just 24 hours before this game, City manager Pep Guardiola spoke of the “difficult times” he has endured since his mother, Dolores, died after contracting COVID-19 in April and banners produced to cover the empty seats at the Etihad carried messages of support and thanks to the emergency services and front-line workers who have cared for and treated so many in recent weeks and months.

Players wore a blue heart-shaped logo on the front of their shirts to pay tribute to the NHS (National Health Service) and they also carried the words “Black Lives Matter” on the back of their shirts in recognition of the movement that has emerged since the death of United States citizen George Floyd in Minnesota last month.

Prior to kickoff, both sets of players lowered themselves and took a knee. Arsenal forward Pierre-Emerick Aubameyang also raised a clenched fist.

Football has certainly found its voice during the shutdown.

The game is taking faltering steps back to normality, though. Clubs are attempting to find a way to make their stadiums look and feel like home without the benefit of fans and City played their usual pre-match tunes through the speakers and dressed the stands in those huge banners.

But footballers need the “oohs and aahs” of the fans. They need to ride the wave of noise to change the tempo, and City do that better than most when they at full flow under Guardiola. They can pen opponents deep into their own territory when the crowd urges them on, but without that noise, the game lacks that crucial element.

It was never more evident than when Raheem Sterling forced a saved from Arsenal goalkeeper Bernd Leno in the first half and promoted nothing more than a ripple of polite applause from his teammates on the substitutes’ bench.

“The first 10 minutes, we were getting used to the atmosphere,” Sterling said. “We expected it to be weird.”

By that point, Arsenal had already lost Granit Xhaka and Pablo Mari to injury — prompting manager Mikel Arteta to introduce substitutes Dani Ceballos and Luiz, who would play a key part in City’s victory.

The Brazilian’s first contribution was to miss the ball when attempting to cut out a Kevin De Bruyne pass, leaving Sterling to open the scoring on 45 minutes.

Luiz was then, perhaps harshly, sent off for a foul on Riyad Mahrez which led to a 49th minute penalty. It was a clumsy challenge rather than a malicious one, but nonetheless, it was a penalty and De Bruyne scored it.

By the time substitute Phil Foden made it 3-0 to City in the first of 11 minutes of stoppage time — awarded as a result of lengthy treatment received by City defender Eric Garcia after a collision with goalkeeper Ederson — the game was up for Arsenal.

“Everything went wrong from the first minute,” Arteta said. “Every possible accident that could have happened hopefully happened today.”

In normal times, they might have been booed off by their supporters, but the absence of fans saved them from that ignominy at least.

By the time they travel to Tottenham on July 11, Arsenal will have waited 2000 since winning away to a “Big Six” rival. On this evidence, that wait will continue.