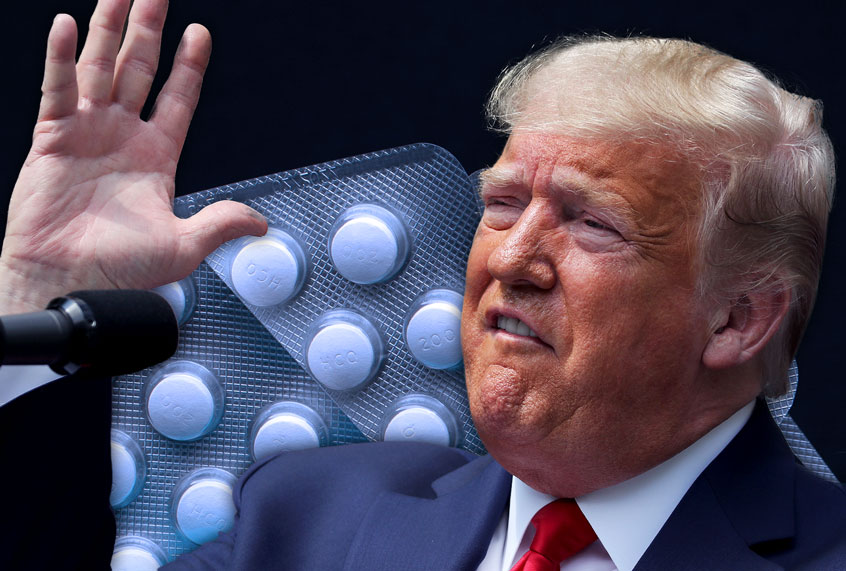 As the fiery social justice movement in the wake of George Floyd’s death has forced news about the coronavirus pandemic off front pages across the country, President Trump’s obsession with the anti-malarial drug hydroxychloroquine as a potential treatment for COVID-19 has appeared to wane.

Though Trump might yet raise the drug’s ghost — especially given the recent retraction of a study that appeared to seal the drug’s fate — the motives for his ardor are still unclear. One explanation is that while the treatment might have been a dud against the coronavirus, it proved more effective against Trump’s political troubles.

Another, however, lurks in the financial links between the president and pharmaceutical companies that produce the drug, including a previously unreported and apparently unrequited relationship between Trump and the CEO of BlackRock, the world’s largest fund manager, whom Trump named to the White House coronavirus economic advisory council.

Trump has still never fully explained why he promoted the drug so forcefully for so long, going so far as to claim he himself took it daily for two weeks despite an outpouring of studies that found the treatment increased the risk of cardiac arrest and death, while providing no measurable benefits.

The president’s endorsement of the drug was so influential that Google eventually suppressed autofill search results for phrases containing trump and hydroxychloroquine.

What is clear is that amid intensifying criticism of the administration’s response to the coronavirus pandemic, Trump and his allies in right-wing media for whatever reason repeatedly injected hydroxychloroquine into the news cycle. Within a matter of weeks the publicity and propaganda machine morphed the unproven drug into a partisan poison pill, polarizing along political lines what in other times might have been a spate of technical press coverage.

Over the course of April, this PR campaign cut into uncharted waters, successfully politicizing medical science on a national, mainstream scale — arguably for the first time.

Anti-vaxxer rhetoric has not made it so far, and does not conveniently cleave along partisan lines.

Real-world consequences for aligning with the treatment appeared minimal, as long as you were a primetime cable news personality, for instance, and not a public health expert or prescribing doctor. However, at least one Trump supporter died from ingesting an aquarium cleaning product that contained a variant of the drug, apparently as a prophylactic against the coronavirus.

These circumstances explain why Trump’s announcement that he was actually taking hydroxychloroquine was received not just with shock and skepticism, but confusion: Even if the president were lying, the claim alone took him where no one else would go.

In an attempt to rationalize the president’s bizarre relationship with the truth, Trump’s first press secretary Sean Spicer explained in a 2018 appearance on the Today Show that he was “the ultimate salesman.”

“I think he talks about it in his books how he uses hyperbole to sell issues and that’s how he is — he’s a salesman, and a negotiator and a businessman first and foremost,” Spicer said.

(Trump’s ghostwriter Tony Schwarz claims to have coined the “truthful hyperbole” sales tactic in “The Art of the Deal.”)

But it is possible that when it comes to hydroxychloroquine, Trump is selling more than his political appeal.

Research compiled and shared with Salon by American Bridge — a political action committee that advocates for Democratic candidates — in conjunction with Salon’s independent investigation has revealed previously unreported connections between the president, his pet drug of choice and powerful investors.

“With no coronavirus treatment available, Trump’s willingness to push snake-oil cures and stymie medical experts is sickening. We need a president who listens to science, not those pitching get-rich-quick schemes,” said Kyle Morse, an American Bridge spokesperson.

In April, Trump named Larry Fink, CEO of BlackRock, the world’s largest fund manager, to the council advising him on the economic response to the pandemic. Though a number of council nominees told media outlets that they had not been notified, Fink was one of a few who was contacted.

BlackRock currently holds an approximate 6% stake — equivalent to $515 million — in the pharmaceutical company Mylan, which makes a hydroxychloroquine sulfate tablet. Mylan announced it would begin to ratchet up HCL production on March 19, the day Trump began promoting the treatment publicly.

In February, BlackRock disclosed an 8.4% stake in Mylan. It is unclear when BlackRock sold off the balance.

Though Fink has not been afraid to criticize the president, Trump has been uncharacteristically deferential to the investment mogul.

“People like Larry Fink we’re talking to, that’s BlackRock — we have the smartest people, and they all want to do it,” Trump told reporters at the White House on March 28.

“This, to them, they love this country, they all want to do it, so we’re speaking to people like that and they’ll be able to work it out,” he added.

That same week, Bloomberg reported that the Federal Reserve asked BlackRock to steward debt-buying programs on its behalf.

BlackRock had also staked hundreds of millions of dollars in several other companies that produced hydroxychloroquine, including an approximate 6% share of Sanofi as of February 2020.

Trump reportedly has about $3,000 invested in Sanofi, through another fund. He has repeatedly rejected reports that he “owns the company” that makes HCL.

BlcakRock also disclosed in February that it held about 7% of Abbott Labs, the company that produced the rapid-response COVID-19 test Trump promoted, showroom-style, in a March 30 Rose Garden press briefing.

On April 16, Fink told CNBC that he believed the country would not be able to open unless and until it ramped up rapid testing capacity.

“We’re going to still see elements of the disease increasing in other parts of the world and until we have adequate testing, rapid testing, it’s very hard to see how we’re going to reboot in the next 30 days,” the CEO said on CNBC’s Squawk Box.

That same day, CNBC reported that BlackRock and Abbott Labs were two of the country’s biggest market movers.

In mid-May, however, the Food and Drug Administration issued a warning about the Abbott test after it was revealed to miss up to half of positive cases. Trump defended it anyway.

The parallel to hydroxychloroquine — which Trump claims to have ingested despite an FDA warning — is difficult to ignore.

According to Trump’s 2016 financial disclosures, he had between $25 million and $50 million stashed in BlackRock’s “Obsidian Fund.” The president claims to have sold off his stocks in June 2016, but has not provided documentation.

Trump has praised Fink, saying in February 2017 that he had put money in BlackRock investment vehicles, and that Fink got him “great returns last year.”

“There are many who believe the U.S. is less welcoming,” Fink said. “Hotels are seeing bookings down dramatically. Universities are seeing a drop in applications from foreign students. There’s something that is slowing everything down.”

“You can’t take personality out of the debate,” he added. “Politics is about personality.”

Though Trump’s motivation is unclear, and political self-interest is just as likely as any financial incentive, the two are not necessarily independent.

For instance, this spring Trump tapped hedge fund manager John Paulson of Paulson & Co. to join the coronavirus economic advisory council. Paulson has contributed more than $500,000 to Trump campaign vehicles, and served as an economic adviser to his 2016 campaign. Paulson also owns 2.3% of Mylan.

BlackRock’s massive market clout imbues the firm with a political dimension by default — especially critical for a president whose electoral fate seems inextricable from the economy.

Mylan itself has spent $680,000 this year on lobbying efforts related to coronavirus legislation, according to research documented by American Bridge.

In late April, ABC reported that state and local governments across the country had stockpiled 30 million doses of hydroxychloroquine. The FDA issued its warning two weeks later. It is still unclear when BlackRock sold off 2.4% of its holdings in Mylan.

Larry Fink did not respond to requests for comment.

The art of scientific deception: How corporations use “mercenary science” to evade regulation

HBO’s Swedish import “Beartown” is a chilling interrogation of the power we give young, athletic men