Delta State Government on Wednesday said the Ayakoromo Bridge linking Burutu and Ughelli South Local Government Areas in the state would be vigorously executed as a top priority project.

The Commissioner for Works, Chief James Augoye, made the disclosure in Ayakoromo while speaking to newsmen shortly after inspecting ongoing construction of the bridge linking Ayakoromo in Burutu and Egbo-Ideh community in Ughelli South Local Government Area.

He stated that the project whose contract was awarded in 2013 was one of the critical infrastructure inherited from the previous administration.

Augoye said that the project had a budgetary provision of N1 billion in the 2020 budget and was the only project not affected by the recent downward review of the budget as a result of the economic downturn occasioned by prevailing COVID-19 pandemic.

He disclosed that more funds would be released to the contractor soon to enable it to mobilise back to the site to complete the piling works in the water.

He said that with work at 68.5 percent completed, the project would be up-scaled in 2021 and ensure that it was completed before the end of the administration in 2023.

The commissioner thanked the Ayakoromo community for the cooperation given to the contractor, saying “the governor specifically directed me to visit the site to see what is happening here.

“From what I have seen, the contractor has not mobilised fully back to site, although there are some skeletal works going on here; he has assured me that they will mobilise fully from Monday.

“I want to assure the community and the contractor that the governor has taken this bridge as a top priority project.

“This is the only project whose cost was not reduced in the reviewed budget; it has a provision of N1billion in the revised 2020 budget and we intend to scale it up in the 2021 budget.

“The governor has also assured me that by next week, he is going to release funds to the contractor to facilitate the work.

“I appeal to the contractor to ensure that he returns fully to the site by next week to complete the piling work, and once that is done, the work is as good as completed.”

“The project was awarded in 2013 and has been facing so much funding challenges, but when Governor Ifeanyi Okowa took over in 2015, he decided that this is one of the projects that must be completed in the lifetime of his administration.

“So, it is our desire that this project will be completed and inaugurated before the end of this administration in 2023.

“As you can see, the piling work is almost completed and from the record before me, the contractor has achieved 68.5 percent of the job which means that once the river piling is completed, the job will be delivered in the shortest possible time,” he stated.

Chairman of Ayakoromo community, Mr. Miekoromo Moses, thanked the governor for the project and appealed for more funding to it to be completed on time.

“We, the entire people of Ayakoromo community appreciate Governor Ifeanyi Okowa for embarking on this bridge project since he came into office and has brought the project to a reasonable level.

“We also express our appreciation to the governor for making out time to visit the project in spite of the COVID-19 pandemic,” he said. 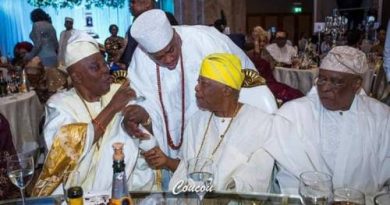 The Edo State Governor, Mr. Godwin Obaseki, has urged Muslims to emulate the virtue and the teaching of tolerance and peace of Prophet Mohammed (S.A.W).

Obaseki, in a statement, noted that the celebration of the birth of Prophet Mohammed (S.A.W) is a time for thorough soul-searching so as to fall back on the prophet’s teachings of good neighbourliness, which he said is needed now more than ever before, amid the coronavirus (COVID-19) pandemic.

The governor urged Muslim faithful to show love and tolerance as espoused in Islam.

According to Obaseki, “I felicitate with our Muslim brothers and sisters in Edo State and across Nigeria, as we mark the celebration of the birthday of the Holy Prophet Mohammed (S.A.W).”

He added, “On this day, we are once again reminded of the need to show love and be at peace with one another for the development and progress of our state and country.”

The governor encouraged Muslims to work for unity and progress in society, just as the Prophet Mohammed (S.A.W) would, urging them to be good neighbours and enviable ambassadors of change. ... See MoreSee Less

JUST IN:
An eleven year old boy has been arrested by the police in Edo state for allegedly joining the gang of hoodlums that attacked oba market police station in Benin city where guns and police uniforms were carted away. The young boy was said to have worn the uniform of a police sergeant moment after the police station 's attack at Evbuotubu area of Benin city. Festus Alenkhe report that ,he declared himself as the Inspector General of Police and was bragging all about in Benin metropolis with the police uniforms where most of his peers were hailing and clapping for him. He was subsequently arrested and will be arraigned in a juvenile court soon. By Festus Alenkhe. 28 October, 2020.
This Story Is Not Adding Up ... See MoreSee Less

Na only you carry yourself come

When govt cannot provide jobs and quality education for youth and children then, they get police uniform and give themselves DPO and IG

A time will come in this country were the poor will have no food to eat but to feed on the flesh of the rich.

Why did the police run and forget his uniform.even the police that own the uniform need to be arrested too.

It's unlawful to arrest and detain a minor for any criminal action. He is not criminally responsible for his actions. The police needs urgent reforms. An ignorant police is a danger to the society.

This is unlawful interception though

He is s child

He was only playing with the uniform

Jokers of a government

Wetin this one sabi mumu police and court people

He is no doubt a minor..They should either let him go with a caution or send him to a remand home for correction ..

So an 11 year old is paraded like a criminal? What sort of animal kingdom is this? No protection for even children. The boy could have innocously picked that uniform on the road after the actual hoodlum dumped it and worn it without a care in the world! This lack of professionalism and disregard for rights and respect for human decency formed the fulcrum for the anti-Sars protest, but unfortunately, they haven't learnt anything

Nigeria police are wise that why they did not handcuff him. I think they should put him under house arrest for 6 months and let him go.

FOR ESAN MEN ONLY
HOW MANY CUBES OF MAGGIE WILL YOU USE FOR 8 CUPS OF EGOSI SOUP? ... See MoreSee Less

One knor-cube is alright, and not more than two cubes of Maggi seasoning. Please try and watch the next Maggi advert.

I suggest 3 will be okay

2maggie is enough because other ingredients will add flavour to the soup, okay

Is the melon engine break or hand break.

You don't need Maggi. You only need ogbore and ogi to prepare your ikpogi

Ooooo its doing me to comment but I hold myself 😜

Listen to article The Central Region has recorded five (5) more cases of the novel Coronavirus as of April 19,