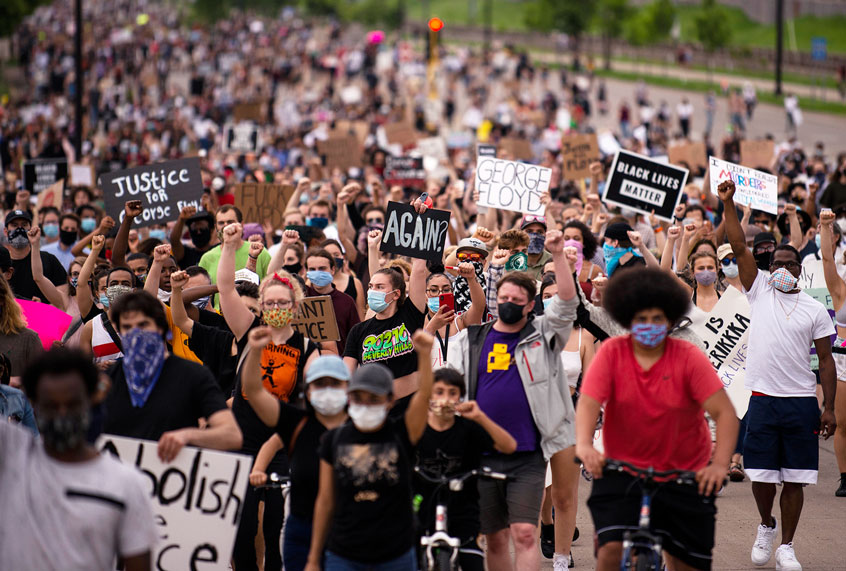 Epidemiologists have raised concerns that the protests against police brutality sweeping the nation in the wake of the death of George Floyd may be a “super-superspreader” event.

“Yes, I’m very worried,” Dr. Albert Ko, department chair and professor of epidemiology and of medicine at the Yale School of Public Health, told Salon in an interview.

“The concern here is a superspreader, a super-superspreader,” he said, referring to events in which one person, in close proximity to others, could infect dozens.

However, there is one mitigating factor, Dr. Matthew Mina, assistant professor of epidemiology at Harvard’s public health school, said.

“One mitigating factor is they’re outside,” Mina said in a Monday press call. “The way airflow is distributed outdoors helps prevent the virus from lingering in concentrated patches.”

“The open air reduces risk, but you do see people gathering close together,” Ko added. “And we know that shouting, chanting, any projection also increases risk. So it’s good to see that many of these people are wearing masks.”

Though the first hotspots in the U.S. have come off the curve, some still exhibit baseline transmission which could catch fire in the tinderbox of a packed demonstration, Ko said.

“Recently, they tested a random sample of people in Boston, and 2.3% were positive,” he said. “So you can imagine what could happen if you have 100 people close together, and two of them are positive. People spend many hours there, making many contacts, so you might have a lot of transmission.”

The New York Times on Friday reported 28,692 new cases nationwide — the most the paper has noted since May 2 in its running analysis of official state and local data.

Because the coronavirus has an incubation rate of up to two weeks, this particular surge — appearing a week after the protest movement spread from coast to coast — is not likely due to the demonstrations alone.

In the last half of May, states across the country began reopening their economies in earnest. Public health experts have long warned that we should expect numbers to increase as people begin to mobilize and socialize.

“We learned from the island of Hokkaido in Japan, where they did a really good job of controlling the initial phase of the outbreak,” Bob Bednarczyk, assistant professor of global health and epidemiology at Emory University in Atlanta, told NPR last month.

Cases and deaths surged in a second wave on Hokkaido, and the island was back on lockdown 26 days later.

“That’s the concern that we have right now,” Bednarczyk said.

In fact, some of the first data points that illustrate this risk in the U.S. came from protests against social distancing measures led by right-wing groups in states across the country, who wanted governors to allow them to get haircuts and go boating again.

Michigan Governor Gretchen Whitmer, a Democrat, told Vice President Mike Pence, a Republican, in a recorded phone conversation that demonstrators who descended on the state Capitol in late April to demand the state reopen had spread infections to rural areas where they live.

“We have seen from initial protests here is that we’ve got COVID-19 spreading in rural parts of our state, from which people traveled,” Whitmer reportedly told Pence.

“The behavior we’re seeing at protests carries a high risk of infection,” Dr. Rob Davidson, an emergency care physician and executive director of the Committee to Protect Medicare, said. Davidson pointed out that anti-lockdown demonstrators at rallies in Michigan, Wisconsin and other states did not wear masks.

“We can see protesters are going from a highly-concentrated event and then dispersing widely,” Davidson said, a claim backed up by cell phone GPS data.

But conservatives now cry hypocrisy as public health officials who once condemned the lockdown protests suddenly shifted their message over the last week.

“The show of solidarity for George Floyd, that is important to express that,” Ko, of the Yale Public School of Health, told Salon. “But our worries about the virus are also particularly in vulnerable communities, which are not only suffering because of George Floyd and police violence but the virus, as well.”

Ko pointed to a recent Indiana University survey that found that about 3% of residents tested positive for COVID-19. The prevalence in communities of color was about twice as high, he noted.

Floyd himself had tested positive for COVID-19 on April 3, and a post-mortem swab also came back positive.

“There are some things that society decides at different times are more important than other seemingly important things,” Mina, of Harvard, said.

“Control of this virus has been extremely important, but the way we control the virus is unlinked from protests — it’s a different question,” he added. “Society is deciding this is an important time to seize this moment.”

It would seem the president would agree.

“The Governor of Michigan should give a little, and put out the fire,” President Donald Trump tweeted on May 1. “These are very good people, but they are angry. They want their lives back again, safely! See them, talk to them, make a deal.”

Bakers against racism: Ovens across the country are heating up for Black Lives Matter

On This Day 2 Years Ago, Nigeria Lost An Irreplaceable Leader, The Iyasele Of Esan Land Chief Tony Anenih Aka. "Mr Fix It" God Be With You Till We Meet On Resurrection Morning Chief. ... See MoreSee Less

May the soul of our honourable leader and also a leader of many nation's high chief TONY IYAKON ANENIH, and the souls of all the faithful departed through the mercy of God continue to rest in perfect peace a very bigger amen oooooo.R.I.P our dear papa.

May the soul of this great man that has a legendary legacy lives on to eternity. Amen 🙏

May his soul rest in the bosom of the Lord Amen

Continue to rest in peace sir .

He was a disgrace to the entire esan land,particularly those of us from uromi.

In fact his demise was a releave from godfatherism and massive wickedness,,proudly uromi

Some can not rest in peace but in peices, he is ONE of them... Evil consume evil, he is nothing to write about... Wasted generation, power for their belly and pocket. #ShameONhim/ThEm