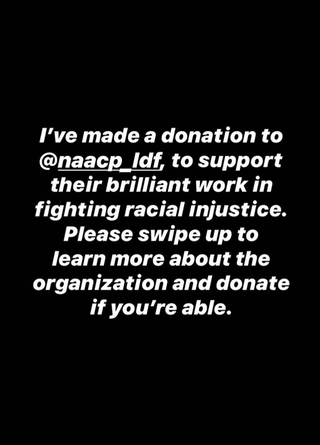 After nearly two weeks of silence on her Twitter while Black Lives Matter protests swept the nation, Taylor Swift returned to the platform to advocate for the movement. Some fans applauded her for using her social media to speak out; others were less impressed and wanted more from her, especially since she waited so long to say anything. (Fans on Tumblr had even urged her to speak out over the weekend.)

Swift urged her 86.4 million followers to register to vote and linked out to Former President Barack Obama’s Medium article about how to keep the movement going. “Racial injustice has been ingrained deeply into local and state governments, and changes MUST be made there,” she wrote. “In order for policies to change, we need to elect people who will fight against police brutality and racism of any kind. #BlackLivesMatter.”

“This article written by @BarackObama is a fascinating read about changing policy at the state and local levels,” she continued. In the article, Obama wrote:

The elected officials who matter most in reforming police departments and the criminal justice system work at the state and local levels. It’s mayors and county executives that appoint most police chiefs and negotiate collective bargaining agreements with police unions. It’s district attorneys and state’s attorneys that decide whether or not to investigate and ultimately charge those involved in police misconduct. Those are all elected positions. In some places, police review boards with the power to monitor police conduct are elected as well. Unfortunately, voter turnout in these local races is usually pitifully low, especially among young people—which makes no sense given the direct impact these offices have on social justice issues, not to mention the fact that who wins and who loses those seats is often determined by just a few thousand, or even a few hundred, votes.

So the bottom line is this: if we want to bring about real change, then the choice isn’t between protest and politics. We have to do both. We have to mobilize to raise awareness, and we have to organize and cast our ballots to make sure that we elect candidates who will act on reform.

Swift finished by tweeting, “We need to fight for mail-in voting for the 2020 election. No one should have to choose between their health and having their voice heard.” You can learn more about voting and getting registered at vote.org.

Before her tweets, Swift had posted a black square in solidarity with Black Out Tuesday last week, which she captioned with the hashtag and 13 black hearts.

She stressed the importance of voting then too, writing in a since-expired IG story, “it is IMPERATIVE that we make change to our broken system, and you have the option and responsibility to do that by voting. Please register to vote by clicking here.” 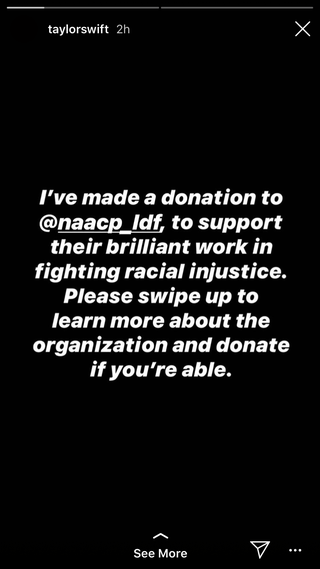 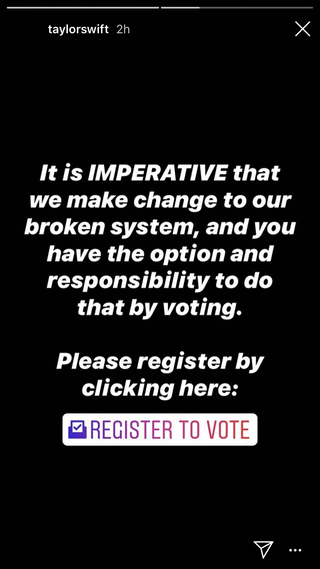 And on May 29, Swift tweeted to President Donald Trump directly about his encouraging racism and white supremacy. “After stoking the fires of white supremacy and racism your entire presidency, you have the nerve to feign moral superiority before threatening violence? ‘When the looting starts the shooting starts’??? We will vote you out in November. @realdonaldtrump,” she wrote. It became her most liked tweet ever, along with her most direct political statement.

In the past, Swift drew criticism for being politically silent and most notably not speaking out during the 2016 election. In her essay about turning 30 for ELLE published last March, Swift admitted that she was just starting to find her political voice after taking “a lot of time” educating herself about the U.S. system so she could speak from an informed place.

Swift told Vogue in an interview published last August that she didn’t publicly endorse Hillary Clinton in 2016 despite her private support because she was afraid it’d do more harm than good.

“Unfortunately in the 2016 election you had a political opponent who was weaponizing the idea of the celebrity endorsement,” she said, referring to Trump without naming him. “He was going around saying, I’m a man of the people. I’m for you. I care about you. I just knew I wasn’t going to help.”

Swift noted that at the time, people weren’t too impressed with her in the aftermath of her Kimye Snapchat scandal. “You know, the summer before that election, all people were saying was She’s calculated. She’s manipulative. She’s not what she seems. She’s a snake. She’s a liar. These are the same exact insults people were hurling at Hillary,” Swift said. “Would I be an endorsement or would I be a liability? Look, snakes of a feather flock together. Look, the two lying women. The two nasty women. Literally millions of people were telling me to disappear. So I disappeared. In many senses.”

Inside the cancellation of “American Dirt” (and its book tour) 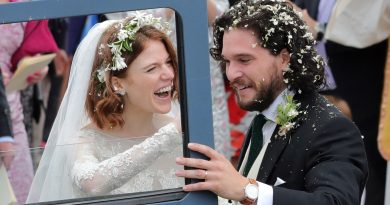 Rose Leslie and Kit Harington Are Expecting Their First Baby Together