ASABA—PAN-Niger-Delta Forum, PANDEF, a pan Niger Delta group made up of monarchs, leaders and stakeholders of the coastal states of the region, yesterday, argued that the position of Group Managing Director, GMD, Nigeria National Petroleum Corporation, NNPC, rightly belongs to the South-South geo-political zone, and urged President Muhammadu Buhari to appoint a competent person from the region as GMD.

The group in a statement by its National Publicity Secretary, Mr Ken Robinson, said: “PANDEF just finds it difficult to even imagine, whether those turning the nation’s very sensitive petroleum corporation into their private and ethnic farmland, would have accepted an Obong Okon, a Chief Ama or an Olorogun Efe, as Group Managing Director, if the institution were a Nigerian National Groundnut Corporation, or Grains Board, or of any predominantly northern-based produce, or natural resource? Why has gold, notable in Zamfara State, not still nationalized?

“PANDEF will further insist on the reinstatement of the practice, whereby the position of Group Managing Director of the NNPC was, rightly, reserved for the South-South geopolitical zone, which produces about 95 per cent of the Nigeria’s crude extraction, equating to more than 90 per cent of the national budget.

“We strongly condemned a situation where North-West and North East have 13 and 12 top management positions respectively in NNPC. The glaringly evident message is that just about all the prime positions of the NNPC are beyond the competence of all staff of the NNPC of South- South, South -West and South -East geopolitical zones origin, and in the entire oil and gas industry from which to poach Nigerians of competence into the soul of national economy.

“Meanwhile, the South- South geopolitical zone, which accounts for about 95 per cent  of the nation’s crude oil and gas extraction, reportedly occupies only 12 lower level management positions, with a spinning of only two, or three names, every time they seize yet another batch of strategic positions, with their flawed propaganda misinformation.

“We deem it necessary to further clarify the false allusion that the South- South geopolitical zone has two members in the NNPC board. This is simply untrue. The Minister of State, Petroleum, is not a statutory member of the NNPC board. Thus,  Chief Timipre Sylva, former Governor of Bayelsa State, only sits on board, at the discretion of President Buhari, who has continued to allocate to himself, the position of Petroleum Minister.

“The NNPC Act of 1977, provides that the Board of Directors of the Corporation shall consist of a Chairman (the Minister of Petroleum), and the following other Members, that is: (a) The Director-General (Permanent Secretary), Federal Ministry of Finance and Economic Development; (b) The Managing Director of the Corporation; (c) Three persons, to be appointed by the National Council of Ministers.

“President Buhari has continued to violate the Act by appointing six other members into the board. We are not oblivious of the workings at the NNPC, where the Group Managing Director, as the Chief Executive Officer of the corporation, is responsible for the execution of its operational policy, activities and associated services, on a day-to-day basis. “Neither have we forgotten how Mr Ibe Kachikwu, as Minister of State for Petroleum Resources, was reportedly treacherously treated, by the then Group Managing Director of the NNPC, late Maikanti Baru, with the backing of those who appointed both of them. “It is important to emphasize that the false claims, fallacies, and propaganda being promoted by the lopsided management of the NNPC, through hired spin masters, will not deter the people of the Niger Delta region from demanding their inalienable rights of adequate, equitable participation in the administration, management and dispensation of the resources that nature endowed their land with.

“It is reasonable to expect that the people of an area from where particular revenue is generated must have suffered some attendant consequences, arising from the activity. And such people should be compensated by enabling them to benefit from the revenues generated in their communities.”

“That was the basis of derivation principle, which existed before the discovery of oil in commercial quantities, in Olobiri, Bayelsa State.

“It is significant to note that derivation, as a revenue allocation principle, has been purposefully suppressed since crude oil became the country’s major revenue earner, with the inclusion of factors like equality of states, land mass and population.

“Meanwhile, oil and gas exploration activities have degraded the hitherto luxuriant, healthy ecosystem of the Niger Delta, and damaged the indigenous people’s means of livelihood, with little or no effort to ameliorate their consequential dire standard of living.

“PANDEF, therefore, reaffirms the position of the Niger Delta people, as articulated in our open letter to President Buhari, with a fresh urgent call, underlining that Buhari should quickly correct the imbalances in the NNPC management, and other agencies of the Federal Government, in the interest of unity, peace and progress of the country,” it said. 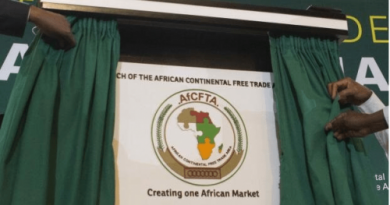 Why African Leaders Must Begin Implementation Of AfCFTA Immediately By Hammed J. Sulaiman