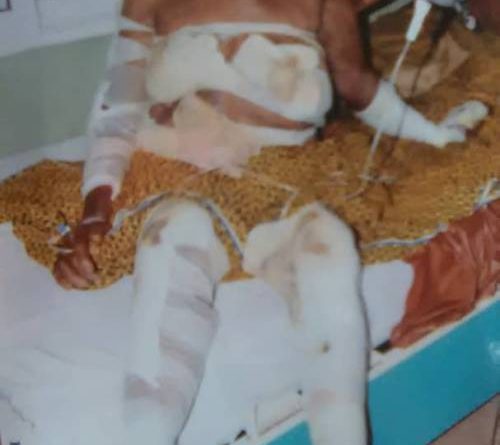 The Advocacy for Alleged Witches(AFAW) has received a photo of another victim of witch-burning in Cross River State in Southern Nigeria.

Two of the victims have died as a result of the burns, while others such as the woman in the photo are battling for their lives at various hospitals.

AFAW calls for the arrest and prosecution of Thomas Obi Tawo and others accused of perpetrating this horrific violence.

Nigerian authorities should not allow this matter to die as usually the case when persons who are connected to those in power are implicated in a crime.

Even though General Iron is part of the government in the state, he should be made to answer for his crimes.

Tawo abused his political position and should not be allowed to get away with this atrocious act.

The Police Public Relations Officer (PPRO) in the state has confirmed that investigation is underway.

But many are saying that no real investigation is being conducted.

This is because Thomas Tawo and the ring leaders of the lynch mob have yet to be arrested.

Victims have yet to be interviewed. There are serious concerns that the perpetrators are trying to use their political connections to evade justice.

Victims and their relatives are crying for justice.

The police and Cross River State government should not let them down.

The police will be sending very wrong signals if they do not arrest and prosecute Thomas Tawo and others who are alleged to have perpetrated this savage act.

The police should use this incident in Boki LGA to send a strong message to other would-be witch hunters in the region that Cross River is a state where the rule of law not jungle justice applies. Cross River state government should rise to its responsibility to protect the lives and property of people in the state.

The government should take all necessary measures to ensure that this form of violence does not repeat itself in the state. AFAW is in touch with some of the victims and is helping defray the costs of their medical treatment.

AFAW is providing humanitarian support to those affected by this horrific attack in pursuant to its objective of eradicating witch persecution in Africa by 2030.

COVID-19: Saving Nigeria From The Peril Of Oil Economy By Ahmed Salami

The Environmental Rights Action and Friends of the Earth Nigeria (ERA/FoEN), yesterday, urged a shift from fossil fuel to renewable sources of energy to reduce the loss of lives and improve livelihood...
View on Facebook
·Share