Uyo – Lawyers in Akwa Ibom state, under the aegis of Concerned Lawyers Forum (CLF), have challenged the re-appointment of Prof. Eno Ibanga, as the Acting Vice-Chancellor (VC) of the state varsity.

Prof Ibanga tenure as the Vice-Chancellor of the Akwa Ibom State University, Ikot Akpaden, Mkpat Enen is reported to have ended after serving his mandatory five-year single term.

The lawyers in their originating summons under suit number: HU\2\2020 and enlisted for hearing at the High Court 10, Uyo alleged that governor Udom Emmanuel flouted the relevant section of the law establishing the university in 2009.

The principal claimant, Mr. Nsikak Akai, said, “we are challenging the powers of governor Udom Emmanuel in the re-appointment of Prof. Eno Ibanga, as the Acting VC of AKSU without following the laid-down procedure of the law establishing the University.

“Prof. Ibanga was first appointed as Acting VC of AKSU in March 2015 and the appointment was confirmed one month later in April 2015.

“Under the law, an individual can only be appointed for a single term of five years after which he is not eligible again until another five years when he last held such office.”

He wondered why the governor should cite Coronavirus as the reason for reappointing Ibanga to continue as Acting VC, even when other universities have named their VCs during the COVID-19 period.

Continuing, he said, “Retaining Prof. Ibanga, again in Acting capacity by the governor citing COVID-19 as his reason is against the provision of the law as enshrined in the in section 4 (3) of the First Schedule to the AKSU Law, 2009.

“The reason given by the governor is not tenable because other universities have appointed VCs institutions during this COVID-19 period including the Kebbi and Kwara Universities.

“The Universities of Uyo and Calabar were in the process of naming VCs even during the COVID-19 period.

While faulting the process of the re-emergence of Prof. Ibanga, as Acting VC, they prayed the Court under Honourable Justice Aniekan Eton, to “compel the governor to relieve Prof. Ibanga of his re-appointment, as well as retrieve all accrued entitlements during the period of his illegal occupation of the office.”

Ibanga’s re-appointment as Acting Vice-Chancellor of the Akwa Ibom State University was announced on Wednesday, April 23, 2020 by the Secretary to State Government, Dr. Emmanuel Ekuwem, stating that this “subsists pending a post-COVID 19 return to normalcy to complete the process of appointment of a new Vice-Chancellor.”

But Prof. Ibanga, while defending his re-appointment, had said: “At the end of my tenure in April, I had written to the governor to do the needful in appointing my successor, but the Governor deemed it fit to ask me to continue in the acting capacity because of COVID-19 pandemic.” 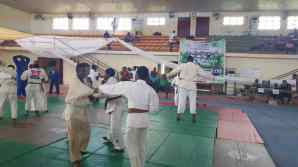