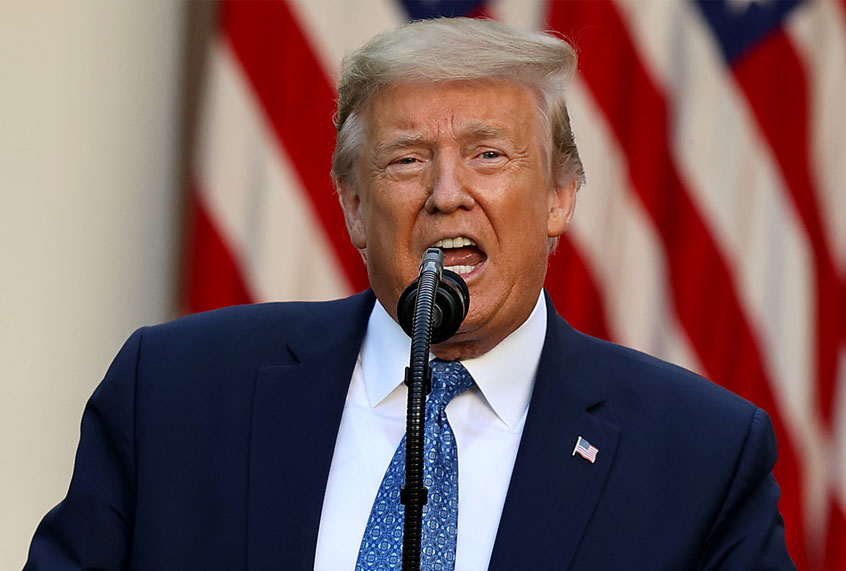 President Donald Trump declared Friday to be a “great day” for George Floyd, the unarmed black man who died in the custody of Minneapolis police, during a speech touting May job numbers.

“Equal justice under the law must mean that every American receives equal treatment in every encounter with law enforcement regardless of race, color, gender or creed. They have to receive fair treatment,” Trump said. “We all saw what happened last week. We can’t let that happen.

It was not a great day for Floyd, who was killed last week when former Minneapolis police officer Derek Chauvin kneeled on his neck for several minutes when he was detained over a suspected counterfeit $20 bill. Chauvin was charged with second-degree murder, while three other officers who were on the scene were charged with aiding and abetting the killing. All four officers no longer work for the force.

Trump and his administration have responded to protests over Floyd’s killing by ordering authorities to tear gas peaceful protesters and threatening to send the military onto American streets to police the demonstrations.

The president’s comments came at an abruptly-scheduled news conference, during which he took no questions for more than 50 minutes, after a surprising May jobs report showed the unemployment rate drop slightly from 14.7% to 13.3%. The number is still higher than it was at any point during the Great Recession. Washington Post economist columnist Catherine Rampell warned that the unemployment rate is really 21.2% “if you include workers misclassified” as “absent from work for ‘other reasons’ when really on temporary layoff.”

“Black unemployment went up,” one reporter told Trump. “How is that a victory?”

Trump, who refused to respond to reporters during the appearance, waved his hand and said: “You are something.”

Trump also refused to engage with another reporter who asked, “How would a better economy have protected George Floyd?”

The surprising May jobs report suggests that the trillions spent by Congress and the Federal Reserve to help corporations and workers alleviated some of the economic fallout from the coronavirus pandemic and associated restrictions.

As the numbers came in, Republicans argued that the positive improvements show that there is no need to pass another big spending bill to help save jobs.

“This definitively kills any chance of trillions of new spending,” one Senate Republican aide told The Washington Post.

“This is how one good jobs report can turn into a nightmare scenario,” Ernie Tedeschi, a former Treasury Department economist, warned.

“This is exactly backwards, like stopping an antibiotic prematurely because you start to feel better,” he wrote. “This is the first jobs report to reflect our fiscal response at full capacity. If we let support expire too soon, we could have a double-dip downturn.”