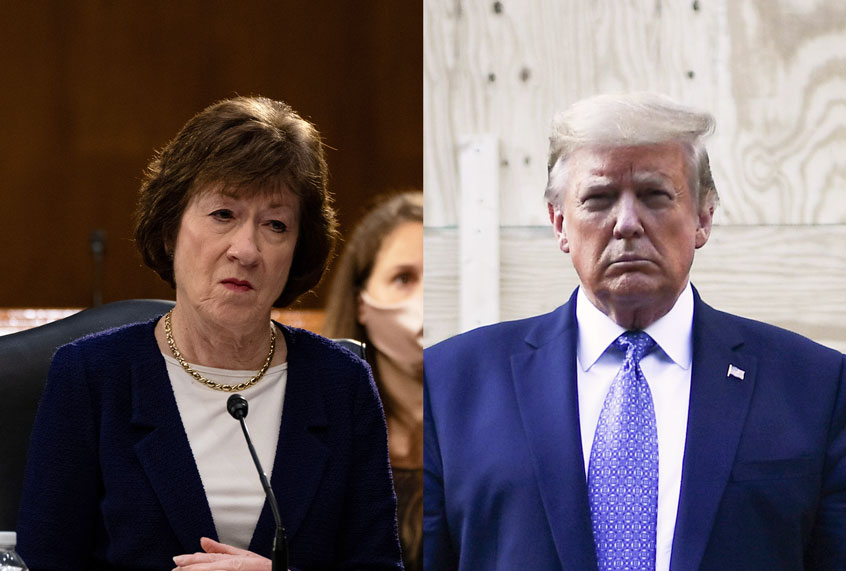 Protesters will meet President Donald Trump on his Friday afternoon visit to Maine, but Senator Susan Collins, caught in the middle of a hotly contested re-election race this fall, will not.

Instead, the embattled Republican senator will be in Washington, where she has “several federal and non-federal events on her schedule,” a Collins spokeswoman told NBC News.

However, there is no Senate activity scheduled until Monday, June 8.

Trump will meet with commercial fishermen in Bangor, where protesters plan to stage a rally against his leadership amid unprecedented civil unrest, which has swept the nation in the wake of George Floyd’s death in the custody of Minneapolis police.

From there, the president will tour Puritan Medical Products, a plant which produces nasal swabs used in coronavirus test kits.

Collins’ spokeswoman said the senator “actually just visited Puritan Medical Products just last month, and she is proud of the work they are doing to combat COVID-19.”

Gov. Janet Mills, a Democrat who recently polled at a 60% approval rating in the state, told Trump in a conference call this week that she was “very concerned” his arrival would elicit raucous protests which “may cause security problems.”

“I again ask the president to check his inflammatory rhetoric at the door and abandon the divisive language that sows seeds of distrust among our people,” the governor said in a statement Thursday. “I hope he will heed this call and appeal to the best in all people and lead us with courage and compassion through this difficult time.”

Collins’ decision to abstain from the visit comes as Senator Lisa Murkowski, R-Alaska., another moderate Republican often compared to Collins, sided with a statement from Gen. James Mattis which panned Trump for his authoritarian calls to mobilize the military against American citizens.

Though Murkowski stopped short of cutting ties with Trump, she acknowledged that she was “struggling” with whether to endorse his re-election bid this November. In response, Trump tweeted that he would campaign for any candidate who challenges her 2022 re-election bid.

“If you have a pulse, I’m with you!” the president tweeted.

A spokesperson for Collins did not respond to Salon’s questions regarding Murkowski.

Once perceived as a rare moderate, pro-choice Republican, Collins, who has held her seat since 1997, has become the object of increasingly intense criticism as her record drifted further to the right over the course of Trump’s term.

She currently trails Democratic challenger Sara Gideon by 2.5 points in a RealClearPolitics average of polls.

Women voters dominate Maine — nearly 80% are registered to vote, and 65% of them turn out — but they have soured on Collins after her votes to acquit Trump in his impeachment trial and approve the lifetime appointment of Supreme Court nominee Brett Kavanaugh amid allegations of sexual assault. And recent polls show that more than 60% of women voters oppose her re-election.

A dark-money group affiliated with Senate Majority Leader Mitch McConnell, R-Ky., and election strategist Karl Rove has poured one million dollars into Collins’ re-election bid since January. That month, Collins toppled McConnell’s reign as the most unpopular member of the U.S. Senate.

Need to diversify? Check out our new global bond ETF.

Nations who have recovered fasted quarantined the fastest. The ruling elites won’t allow that here

President Akufo-Addo, has cut sod for the construction of an integrated recycling and compost plant and water treatment plant at