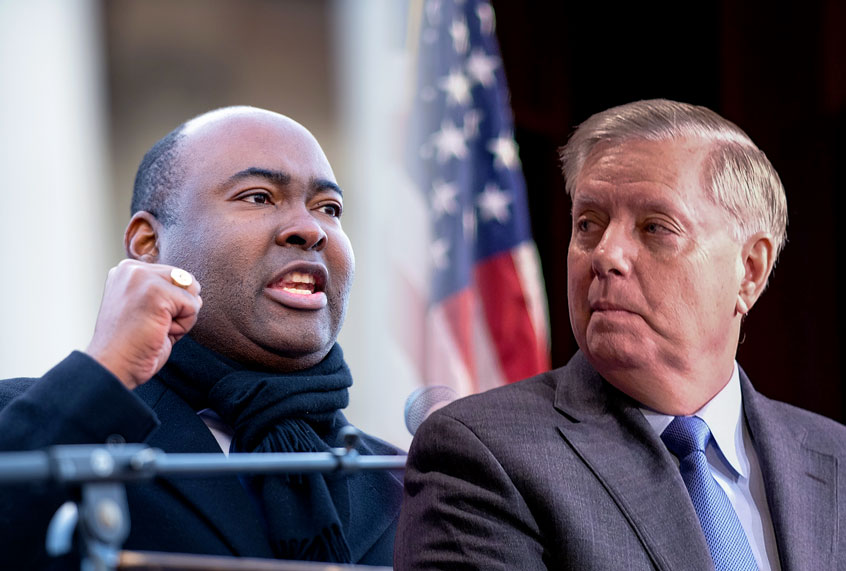 Sen. Lindsey Graham, R-S.C., is locked in a dead heat in his bid to win re-election, a new online poll finds.

Graham, who has represented South Carolina in Congress since 1995 and held his Senate seat since 2003, has in recent months faced mounting pressure from Democratic challenger Jaime Harrison. A new Civiqs poll released this week finds the two rivals tied at 42%.

A deeper dive into the poll reveals more possibly unnerving developments for Graham. Fifty-six percent of South Carolina voters have an unfavorable view of the senator, while only 35% have a positive view of him.

Harrison, a Yale and Georgetown Law graduate who rose to become the first black chairman of the state’s Democratic Party, has claimed an 18% lead among independent voters — 46% to 28% — though GOP voters still dominate the state.

If the election were held today, 10% of voters say they would vote for someone else.

The poll surveyed 591 registered South Carolina voters between May 23-26, and Civiqs, a data analytics company, estimates a 4.5% margin of error.

At the presidential level, presumptive Democratic nominee Joe Biden trails President Donald Trump by ten points, a lead which the incumbent has enjoyed over Democratic challengers for months. Biden’s favorability, however, is tied with Graham.

Graham has suffered a steep drop in polls this year. A Marist survey in February found him up 54% to 37% over Harrison. Only one month later, an internal Harrison poll found that Graham’s 17-point lead had withered to only four points.

Even as his obsequy to Trump increases, Graham’s popularity among Republicans in his own state has fallen dramatically after its post-Kavanaugh peak in 2018.

“Graham’s political skills should not be underestimated, and he’s clearly taking this race quite seriously, as he should,” the Cook Political Report wrote in its analysis. “However, we also can’t overlook the considerable resume that Harrison also brings to the race, and even South Carolina Republicans admit he is a strong candidate.”

“This is HUGE: Today, the Cook Political Report *and* Crystal Ball updated our race from ‘Solid Republican” to ‘Likely Republican.’ Watch out, Lindsey Graham, we’re coming for your seat,” Harrison tweeted in response.

Though Harrison outraised Graham during the first three months of 2020 — $7.3 million to Graham’s $5.6 million — Graham still has a $13 million war chest, the largest of any candidate in South Carolina history.

However, two dozen key Graham donors — including a major industry executive — have defected to Harrison, and an FEC analysis shows that more than 80% of Graham’s $13 million reserves have come from out-of-state donors.

Much like Trump, Graham has recently come under fire for his response to the coronavirus pandemic. Graham initially downplayed the new coronavirus, inaccurately comparing it to the flu in a March 3 interview with Carolina Connection, a South Carolina TV station.

The senator’s response to the coronavirus pandemic, which largely parroting Trump talking points, may offer one explanation for the recent swing in his numbers.

The senator — who had to self-quarantine after he was exposed to the infection during a Mar-a-Lago visit — then added that the pandemic is “a serious problem, but it’s not the plague.” Trump himself has since repeatedly undermined that claim.

The person to watch most closely, then, may be Graham himself.

After initially saying he would not force through a Supreme Court nomination should a vacancy open in 2020, Graham suddenly changed his tune, telling former Fox News host Greta Van Susteren earlier this month that, “Well, Merrick Garland was a different situation. You had the president of one party nominating, and you had the Senate in the hands of the other party. A situation where you’ve got them both would be different.”

“I don’t want to speculate,” he added, “but I think appointing judges is a high priority for me in 2020.”

Multiple coronavirus strains are now circulating. Here’s what that means