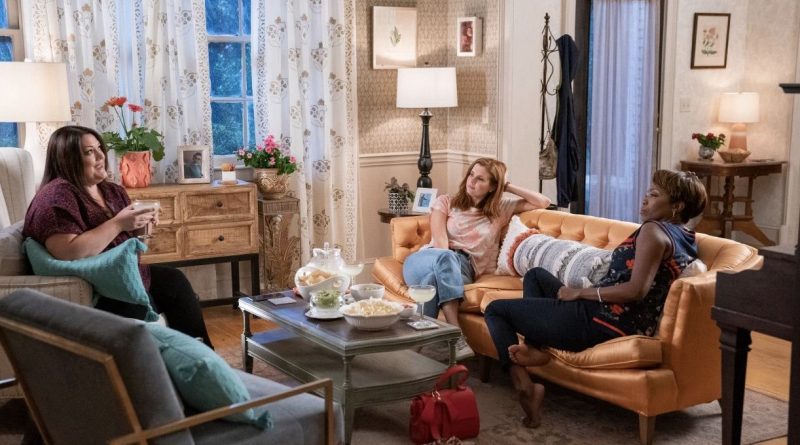 The Carolinas are king this summer, with shows based in the two states ruling the Netflix charts. It started with teen drama Outer Banks, and now, the small-town romance Sweet Magnolias. Based on a series of books by Sherryl Woods, it promises Southern comfort in the form of a trio of middle-aged women (JoAnna Garcia Swisher, Brooke Elliott, and Heather Headley), best friends since childhood who endure separate but overlapping conflicts—divorce, moody children, and the promise of new love—as they build a budding spa business from the bones of an old South Carolina landmark.

Sweet Magnolias has a feel-good Gilmore Girls vibe, quaint and heartwarming, with a first season that meanders through touching but predictable family drama—that is, until we reach the finale. As Maddie (Swisher) watches her ex (Chris Klein) beg her to take him back, the couple receive a phone call: Their son Kyle (Logan Allen) was in a car crash. The paramedics drag him out alive, but there’s someone else in the passenger seat. The season ends before we find out who.

With such an obvious cliffhanger, it’s nearly impossible to imagine Sweet Magnolias won’t return for a season 2. Here’s what we know so far.

The cast and crew are eager to return for a second season.

Multiple cast members have spoken out about their hopes for renewal. Headley told The Sun, “I hope the world allows us to have a Season 2.” And Zoey 101 alum Jamie Lynn-Spears, who plays Bill’s new fiancee Noreen, agreed, saying she has her “fingers crossed.” “[The finale] leaves a lot of doors open, and hopefully we’ll have a season 2 to figure out where it all leads us because I would be so excited to see where Noreen goes in season 2,” she told The Sun.

Showrunner Sheryl J. Anderson wouldn’t confirm to The Sun that she felt “confident” about a renewal, but she remains eager: “I would love to continue this story because I love the characters. I love our cast and crew.”

Finally, Anneliese Judge, who plays Annie Sullivan, daughter of Dana Sue (Elliott), told ABC 11 she sees many directions where the show can go. “The opportunities, I feel like, are endless,” she says, “and I’m so excited to chase those and see where Sweet Magnolias takes me.”

The series has yet to be renewed.

Sweet Magnolias debuted on May 19, and Netflix has a proven track record of waiting several weeks after a launch date before releasing official renewal news. If you’re worried about your chances of seeing these characters again, it’s entirely possible we’ll get an announcement in July.

There’s plenty more material for the show to draw on.

Woods, the author behind the original books, confirmed on Twitter that most of the material for Season 1 comes from the first three books in the series. Since there are 11 books total, there’s no shortage of material for the showrunners to weave in. But if you can’t wait to see where the show goes next, you can always dive straight into the novels for a potential sneak peek.

The NRA spent $22 million in legal costs over the course of the first five months of 2021: report