Members of Ijinle Development Multipurpose Cooperative Society at the inauguration of the Society in Lagos on Friday.

Yoruba Ko’ya said the organisation was worried over the poor level of food production and high level of poverty and hunger in Yorubaland, hence its resolve to launch a formal platform through which numerous Yoruba sons and daughters can be empowered financially without any burden.

The Convener of Yoruba Ko’ya, Otunba Deji Osibogun, who addressed the small gathering through teleconferencing, said: “I am seriously worried that Yoruba nation that used to be a haven of agricultural production in the First and Second republics now rely heavily on other parts of the country for virtually all food items including gari and yam.

“I am currently away from Nigeria, but reports from home shows that this COVID-19 pandemic has really exposed Yorubaland as a weak entity in terms of food security and agricultural production.

“Also, this COVID-19 pandemic has opened our eyes that every nation must promote and develop knowledge-based entrepreneurship otherwise known as STEM— Science, Technology, Engineering and Medicine.

“Therefore, Yoruba Ko’ya, through Ijinle Development Multipurpose, will be promoting our innovative and creative young men and women on knowledge-based entrepreneurship so that we can have a Yoruba nation that can compete with the rest of the world.”

The multipurpose society, according to the Director of Finance and Investment of Yoruba Ko’ya, Mr. Olakunle Osuntokun, is to be used to propel knowledge-based entrepreneurship, food production, trading and vocational training among the younger generation and market men and women in the South-West geopolitical zone.

Osuntokun said the Ijinle Development Multipurpose will help to promote culture of savings among the market men and women and aspiring young entrepreneurs in Yoruba land and boost their savings through loans that attract only 5% interest payable in one year so that their businesses can grow.

He said: “We are focusing on Food Production, STEM, Vocational Trainings, Agriculture Value Chain and Digital Wealth. Our vision is to build an industrialized Yoruba land – strong in commerce and knowledge-based economy.

“We have faced the reality that any nation that lacks the capacity to feed at least 70% of her citizens will lack true peace. Today, the south west cannot feed 5% of her people which is a worry to us. The Ijinle Development Multipurpose is going to bridge the gap and with consistency, mercy and grace of God, we shall get there”, Osuntokun said.

In his remarks, the Ikeja Area Officer of the Directorate of Cooperative in the Lagos State Lagos State Ministry of Commerce, Cooperative and Industry, Mr. Olusegun Odedina, who inaugurated the multipurpose cooperative society in line with Lagos Coop Law Cap of 2004, said many nations of the world including South Africa are now strengthening their economy, building wealth and creating employment opportunities for their teeming population through Multipurpose Cooperative. 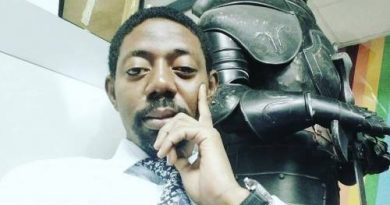 The Need For Electoral College In Nigeria By Kunle Lawal

Continuation of showcasing Governor Godwin Obaseki projects across the 18 local government areas. This is Ekpoma UPOJI road very long like that of Okpekpe road in Auchi, Godwin Obaseki tarred it without media noise.

Am using this medium to call on Edo people to support and vote the working Governor Godwin Obaseki to continue with this giant stride development in our state under the umbrella of PDP. ... See MoreSee Less

They yeye Oshio turned his back on this road, clamming it's a federal road and he won't do it....

Let's take a good closer look at this road, does it merit half criteria of a standard road ? Or perhaps is still under construction.

Better minus this road from his projects, because is only granite dey the road

Snap the recent picture of the road

He tried, but is likely not yet complete

NA THE MATTER WE DEY! Obaseki is a Goaaaal ... See MoreSee Less

Old fools dat is not relivant in edo politics

Who is this man?

When you teach person work, you nor dey teach am everything. U see how wicked you are even for old age. Hope You nor go Die for inside Tricks and Fraudulent ways of life, which kind of upbringing this old man go give his children, , , , , e nor go pass Thugs.

Owanle at this ur age u still want to gamble with the life of the younger generation, no way. For supporting oshiomole, oga una fail.

No money for you

Stupid old fool. These are the public fund looters in Edo State. Erewele has never contributed meaningfully to the progress of Edo State. He is well known to me. He is a betrayal!!!!.

Please don't take this old drunkard seriously, And we Esans should thank the executive governor, Obaseki also,for giving our very own brother, our son and a great Leader Hon Sir-Ezehi Magnus-Desmond Igbas has been appointed as SSA to the State Government. Great and eloquent son of Uromi, a very vibrant Honourable and a strong believer of the Ideology of the Esan in developing Uromi.Lets join in praying for, that more appointments like this will come to Esan land.Etsakos had had enjoyed same in days and reigns of their most important dwarf man who Elimin Esan will soon kill that he retired our father Annenih.It's our turn to give our full support to Obaseki to attain the much needed 4+4=8 Ones more Congratulations sir patriotic son of Esanland who holds Esanland in high esteem.

Who is this one?

These are the state criminals!

You are so bright.

Is this beautiful girl real