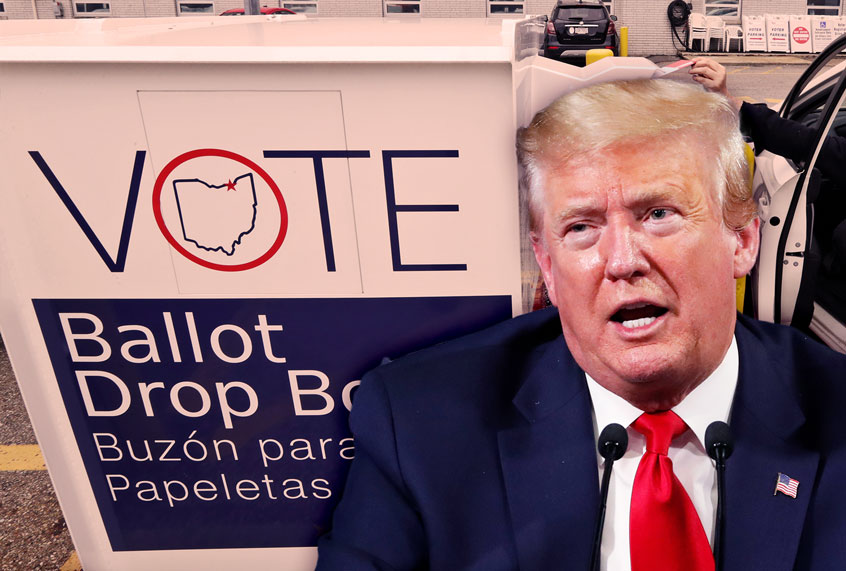 Political reporters from our top news organizations aren’t falling for Donald Trump’s transparently deceitful campaign to demonize mail-in voting, but they aren’t exactly calling it out for what it is, either.

The good news is that they’re not relying on their fallback position when the two political parties are at odds, which is to present both sides as valid and let the readers and viewers decide.

They’re describing his motive as overtly partisan — which Trump himself has frequently avowed, for instance by tweeting that mail-in voting “doesn’t work out well for Republicans.” (Which basically isn’t true either.)

They’re pointing out that he doesn’t criticize Republican governors who advocate for mail-in voting, only Democrats.

They’re noting that Trump himself votes by mail.

They’re warning readers that voting access “has become a major battleground in the 2020 presidential race.”

And they’re writing that “some Democrats” worry that Trump’s “pattern of insinuations about voting fraud … are a prelude to potential efforts by Republicans to dispute the outcome in November if Mr. Trump loses.” (Hint: It’s not just “some Democrats.”)

But what they’re not doing is putting this latest attempt at voter suppression in its essential context as part of a massive Republican program to create the possibility of minority rule.

The essential promise of democracy — that everyone has a vote, and that the people who get the most votes win — has never been fully realized in the United States, and it has taken some extra big hits of late. Just in the last two decades, the Electoral College has twice granted the presidency to a candidate who lost the popular vote. The citizens of small states get wildly disproportionate representation in the Senate. Both parties — but these days overwhelmingly the Republicans – have historically gerrymandered voting districts in the states to create wildly lopsided congressional delegations.

The Republican Party, with its white nationalist core, sees the browning of America as a sign of long-term electoral doom, unless it can prevent certain demographics from voting in large numbers. And Trump has shown no ability to expand his base, so his only winning ploy is to subtract from the Democrats’.

Republicans do not believe they can persuade a majority of voters to support their agenda. They’ve practically given up trying. And so they fight to exclude Democratic-leaning voters from the electorate and work to lock the Republican Party’s current advantage into the system itself, to bend and break the rules so that the public can’t actually translate its preferences into power. Rather than do the work of democracy they’ve decided instead to limit democracy itself.

Demonizing mail-in voting during a pandemic is actually no more ridiculous than demanding Voter ID when in-person voter fraud is statistically nonexistent. What they have in common, along with the intimidation of voter registration groups, purges of voter rolls, poll watching and aggressive challenges of “suspicious” ballots, is their singular goal: blocking legitimate but probably Democratic voters from exercising their constitutional rights.

The pursuit of that goal, ostensibly in the name of voter fraud, is an outrageous deception that only works if the press is too timid to call it what it really is. And over the last decade, reporters have been less willing to be played. Hurray.

Now the question is: Beyond calling it out in the news columns, should reporters portray it simply as a dispute — or as an outrage and a travesty of justice?

News organizations should not take partisan positions, but voting has nothing to do with partisanship — even if all the people suppressing it happen to be on one side. (Ironically, rural Republicans could be the voters most hurt by attacks on mail-in balloting.)

This would be in the same tradition as news organizations whose coverage bravely exposed the evils of slavery, supported the civil rights movement, contradicted the government about Vietnam and Iraq, and refused to equivocate about whether climate change is real. It’s a proud bunch. They made the right call.

Here’s one example to watch: Last November, The Guardian launched an ongoing series of stories under the rubric, “The fight to vote,” with the avowed goal to “investigate systemic voter suppression and how it undermines democracy in the United States.” One recent article looks specifically at “how the president could take advantage of the way voting procedures are rapidly changing in response to Covid-19 and question the legitimacy of election results in November.”

Mainstream journalists shouldn’t be afraid of being called out for taking sides when what they’re doing is standing up for basic constitutional rights. Indeed, the greater danger is that the public condemns them — or even worse, stops paying attention to them — for having no convictions at all.

Taking a bolder stance wouldn’t even necessarily require that much — maybe some fiddling with lead paragraphs to make them a bit less stenographic, adding a bit of essential background somewhere near the top, stating certain things as fact rather than attributing them to “critics” and making sure that articles with lots of solid information aren’t written in such an equanimous way that they get headlines like this:

This is a defining moment for our major news organizations. As MSNBC anchor Chris Hayes tweeted on Wednesday:

Let us praise Claire, the true hero of “Fleabag”

In solving his own son’s murder, “The Pharmacist” also took on the opioid epidemic