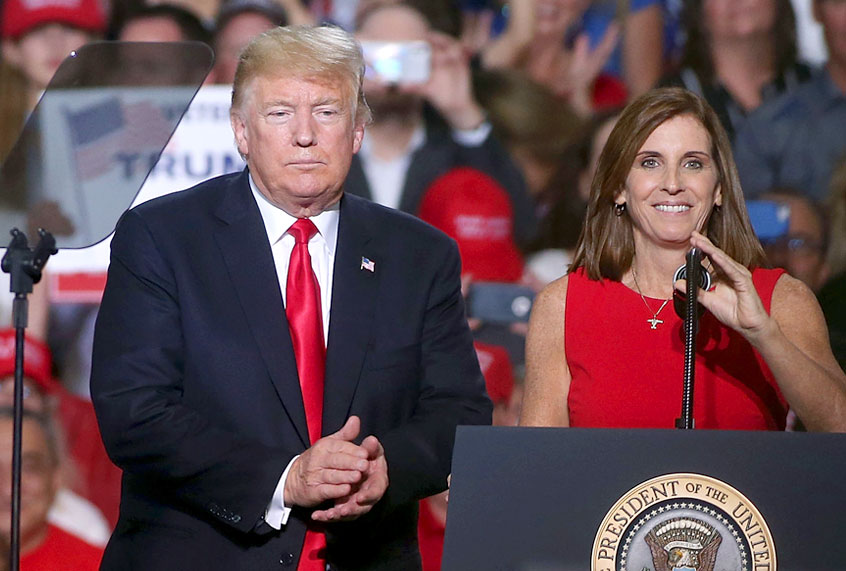 Sen. Martha McSally, R-Ariz., has taken a four-point dive in one month against astronaut Mark Kelly, the Democrat vying to unseat her.

“McSally is doing terribly,” pollster Mike Noble told AZCentral on Monday. “There’s no way to find a bright spot on that one.”

Kelly’s numbers have held steady this spring — tamping down McSally’s brief surge after she insulted the veteran congressional reporter Manu Raju in January — whereas McSally’s disadvantage has increased, dropping from a margin of 51% to 42% in April to 51% to 38% in May.

The deficit matches the tracking poll’s 4% margin of error — a mix of automated and personal calls measured by OH Predictive Insights between May 9 and 11 — but more disturbing for Senate Republicans is the news that McSally now trails by nearly 20 points in the state’s most populous county: Maricopa.

A year ago, the same poll had Kelly up by a much slimmer margin in Maricopa: only 46% to 41%. The county had been a Republican stronghold until 2018, when moderate Democrat Kyrsten Sinema beat McSally among her own demographic. Despite losing, McSally still became a senator after Arizona Gov. Doug Ducy appointed her to replace outgoing Republican Sen. Jon Kyl, who himself had been appointed to fill the seat left open by John McCain upon his death in 2018.

McSally is the only senator in U.S. history to lose her election bid but still serve out the Senate term.

“Maricopa County is the key for Republicans winning,” Noble, the pollster, said. “It’s the key to Trump’s re-election, but it’s also key for the Senate seat. Maricopa County is where the battle is at, and right now it’s not going well for McSally.”

The same poll registered President Donald Trump’s approval rating at 45% in the state in which he beat Hillary Clinton by a margin of 48% to 43% — another development which does not augur well for McSally’s chances, especially when juxtaposed with Kelly’s 2-1 lead among independent voters.

If Arizona voters view the 2020 election as a referendum on Trump, McSally could find herself in a tight spot, given criticism of her response to the coronavirus pandemic, one which appears to be hitched to her fealty to the president.

In early April, McSally boasted about Trump’s allotment of 100 ventilators to her state.

“Huge news for Arizona,” she tweeted at the time. “I spoke with @realDonaldTrump on Wednesday afternoon to request additional ventilators from the Strategic National Stockpile. Today, POTUS delivers with 100 ventilators headed to AZ. Thank you to President Trump and @VP for hearing our call.”

However, federal officials had at first approved Ducey’s initial request of 5,000 ventilators. That number then dropped to 500 ventilators, one-fifth of which the state ultimately received.

The developments bode well for Democrats, who view Arizona as a must-win in order to flip the Senate and remove the self-proclaimed “grim reaper” Mitch McConnell from his powerful perch as majority leader. Republicans alone had represented the state of Arizona in the Senate since 1995, and on the heels of Sinema’s 2018 upset, it seems possible that Democrats could recover both seats within two years.

Arizona, which with the exception of former President Bill Clinton in 1996 has voted Republican in every presidential election for decades, looks like a ripe target for Democrats on the presidential front. Presumptive Democratic presidential nominee Joe Biden has opened a 50% to 43% lead on Trump, per the same survey.

And it seems as if the resistance smells blood. Two days before the tracking poll calls went out, the Lincoln Project — a group run George Conway, the husband of White House counselor Kellyanne and an influential never-Trump conservative — launched the first in a campaign of attack ads against McSally.

Dark-money group the Senate Leadership Fund, which is affiliated with McConnell and election strategist Karl Rove, said it planned to spend $9.2  million on the Arizona seat. However, it will hold off on ads until the fall.

The National Republican Senatorial Committee also signaled alarm: It will drop $5.7 million on an ad campaign in an effort to pull McSally out of her ever sinking hole.

We bring you warm regards and wishes of a happy New Year from Team Alliance for Science Ghana. We wish