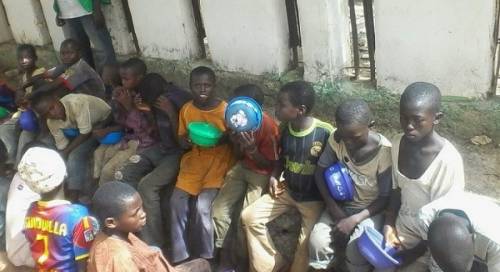 The Kanem-Borno Empire is one of the ancient empires on the African continent. As far back as the 10th century AD, it got to the zenith and was an extremely prosperous city which attracted traders and tourists to its city walls. The reigns of Mai Idris Alooma, Mohammed El-Kanemi took the empire to its apotheosis as wealth untold poured into her.

Characteristic of every wealthy state was also mind-boggling poverty and the Kanem-Borno Empire was no exception to the rule. The practice of underaged boys being taken away from their poor parents and apprenticed to Islamic scholars was prominent in the empire. These boys who suffered lack of care were forced not only to take care of themselves but their teachers as well by begging for alms in tattered bowls from well-meaning passersby.

After the 1804 Jihad which saw the Fulanis bringing together all the Hausa states into one empire under the leadership of Uthman Dan Fodio, the practice spread to the other parts of the caliphate.

When the British conquered the caliphate, their indirect rule which respected the traditional authorities made them leave the almajiri syndrome the way it was. The colonial masters built schools there and  the wealthy and powerful recognizing the efficacy of Western education sent their offspring and children there in order for them to be upwardly mobile in the future.

The poor who had no economic power were forced to send their children into the streets as almajiri children with a bleak future as they learnt no tangible skills with which to survive in the harsh society that has no buffer for the impoverished.

It’s paradoxical that the north which has ruled the nation far longer than the South has the highest case of mind boggling poverty. The almajiris are exposed to the harsh vagaries of life from an early age and are frequently recruited for the dirty jobs by the politicians. The Boko Haram Insurgents also lure these boys into their fold and the latter have got nothing to lose since the promise of a glorious paradise is too beautiful too resist not after having gone through the school of hard knocks while on their earthly sojourn.

Former President, Goodluck Ebele Jonathan, was concerned about the problem in the north and went out of his way to build over hundred of schools for the almajiris which combined western education with the Islamic in order to better equip the boys for life’s challenges ahead.

Many Northern interests, who were not eager to see their region developed waged a vicious propaganda war against the schools. Rather than cooperate with Jonathan, they were irked that their much ‘cherished’ culture was about to be changed and rallied the unlettered almajiris to work against his vision for a more emancipated North.

It is tragic that the current President Muhammadu Buhari-led government discontinued with the schools which would ironically have led to massive development in his region and would have engraved him eternally in the hearts of the poor of the North.

One of the reasons why the former Emir of Kano, Sanusi Muhammadu Sanusi, was dethroned was because he spoke out against the almajiri syndrome urging the northern elite to have a sunset clause to the retrogressive practice that is keeping the North in perpetual poverty chains.

It’s hypocritical of the Northern elite to turn a blind eye to the almajiri syndrome since their kids are not subjected to the harrowing torture inherent in it. Buhari’s kids for instance had their tertiary education in the United Kingdom – the question of how he was able to fund it from his cattle business is a discussion for another day.

Education remains the greatest legacy that can be bequeathed to the next generation and it is imperative that the almajiri syndrome is replaced with western and vocational education so that the North can move forward. I am not advocating the scrapping of Islamic education as it is sacrosanct to the faith of the Islamic faithful but it should be harmonized with both Western and vocational.

The wonder of the United Arab Emirates, a Muslim country wasn’t on the back of the almajiri system of education but on the fusion of Islamic and Western. Saudi Arabia’s preparation for a post oil era is hinged on the basis of Western education and not the almajiri.

There is the need for the Northern elite who are progressive minded to take up the gauntlet to press for western education to be diffused to the masses there in their best interest. The Boko Haram insurgency would have less hit the North if there were more Westernly educated citizens there.

The rest of the world is talking about automation, artificial intelligence etc which has brought about its own peculiar challenges and is even a threat to highly skilled workers. The North can’t still be debating about almajiris in this jet age. It is high time they stopped being the laughing stock of the rest of the world.

Historians would recall with gusto that the north delayed the nation’s independence by four years with the phrase which was attributed to the Sarduana of Sokoto and Premier of the Northern Region, Alhaji Sir Ahmadu Bello. Chief Anthony Enahoro’s independence motion moved in 1953 for independence in 1956 suffered a defeat following the usage of the majority numbers power by the North. The world will not wait for the north this time around as the south did in the 1950’s.

The time for the Northern elite to take decisive steps in ensuring a widespread of Western education in the beleaguered North is now!

Legality Of Marijuana In Nigeria: A Legal Opinion By Kayode Ajulo PhD