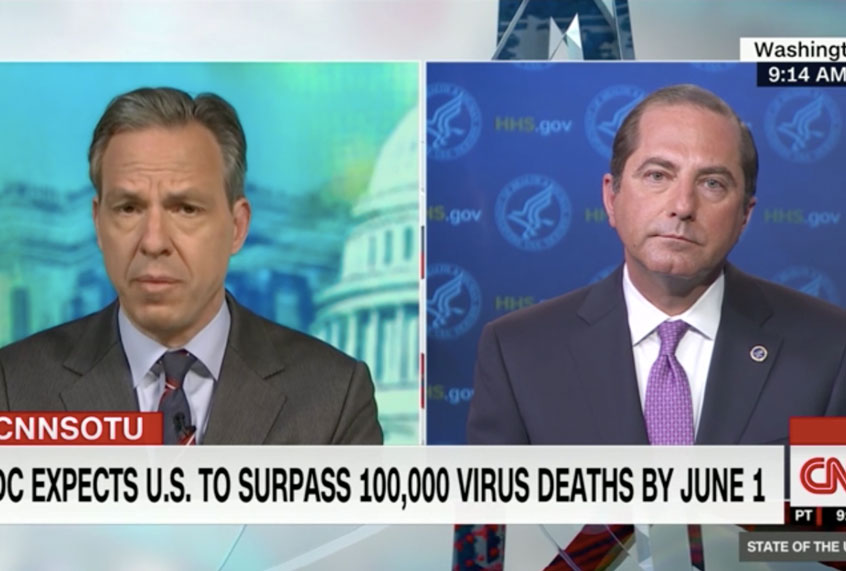 Donald Trump’s administration is truly a one-trick pony. Whatever narratives Trump’s minions roll out, white supremacy and racism are always the baseline..

During an appearance last Sunday on CNN’s “State of the Nation,” Secretary of Health and Human Services Alex Azar offered this explanation of why black people and other nonwhites are at such high risk of death from COVID-19:

Unfortunately the American population is a very diverse — it is a population with significant unhealthy co-morbidities that do make many individuals in our communities, in particular African-American, minority communities, particularly at risk here because of significant underlying disease health disparities and disease co-morbidities and that is an unfortunate legacy in our health care system that we need to address.

Azar detailed these “co-morbidities” as primarily meaning obesity, diabetes and hypertension. To state the obvious, the Trump administration has done nothing to address these and other health problems. Moreover, it is actively working to overturn the Affordable Care Act and other programs shown to improve health outcomes for the American people.

The implications of Azar’s comments are clear enough, despite the superficial language of concern: Black and brown communities and individuals are somehow responsible for dying at higher rates from the coronavirus pandemic and the nation’s “unfortunate” diversity is at least partly to blame. Of course, after making those comments Azar attempted, predictably, to backtrack and deflect.

Here’s the shorter version of the secretary’s analysis: “Dear black and brown people: COVID-19 is killing so many of you because you are fat and lazy. Deal with the problem yourselves. This is your own fault.”

It may be worth observing that the obesity epidemic in America is not limited to black and brown people in urban neighborhoods. Many of Trump’s supporters in red-state America suffer from these same “co-morbidities.” One must wonder whether Azar will slur them as being fat and lazy, and ultimately responsible for their own severe illness or death from the coronavirus? Does the same victim-blaming logic apply to Donald Trump, a person who appears to be morbidly obese?

The coronavirus pandemic is global. Since the outbreak, it has killed more than 300,000 people and infected almost 5 million others. In the United States, more than 90,000 people have died. Some projections suggest that in June the daily death toll may approach or exceed 3,000 Americans — more people than were killed in the World Trade Center on 9/11, every single day. Scientists warn that no vaccine will likely be available for at least a year, and likely longer. Lives are being ruined. We are on the verge of a second Great Depression, or already in it. The world economy teeters at the edge of the abyss.

Government exists to confront and resolve problems greater than any one person or group of individuals could solve on their own. To blame black and brown people for dying and suffering from the coronavirus pandemic is the kind of moral logic that underpins crimes against humanity.

Alex Azar has no insight or wisdom to offer about the pandemic except to lie and recite programmed talking points intended to exonerate the Trump regime. The ultimate goal of Trump’s pandemic death cult is to create a narrative where 150,000 or more deaths are framed as a victory, rather than a cataclysmic failure of presidential leadership and governance – if such words may even be applied to Trump and his cabal.

To explain and decode Azar’s comments about “diversity” and black and brown people dying in this pandemic is to see, once again, the unifying logic of Donald Trump’s movement and his Republican Party, news media, voters and supporters.

Truth and empirical reality do not matter to today’s “conservatives” and other right-wing revanchists. As such, context is also seen as irrelevant because it is the basis for any true understanding of complex events.

Conservatism, especially the type of fake populist right-wing fascism and authoritarianism that Trump and his movement represent, rejects complexity of thought and principle.

Why are black Americans and other nonwhites dying at disproportionately high rates during the coronavirus pandemic, as compared to white people? Social inequality.

For most of the country’s history through to the present, black Americans and other nonwhites have been denied access to quality health care. They are also more likely to be uninsured or underinsured. What social psychologists describe as “racial battle fatigue” also makes nonwhites more vulnerable to the coronavirus and other serious illnesses.

Food deserts and environmental racism also contribute to the co-morbidities that make black and brown people more vulnerable to this pandemic — and to many other forms of illness and disease.

Wealth and income disparities as well as the structure of the labor market combine to make nonwhites more likely to die from the coronavirus pandemic.

As a strategy, the Trump administration and the Republican Party have enacted and pursued policies that make these racial disparities much worse and have therefore made the human cost of the coronavirus much higher for nonwhite people.

White supremacy and racism are central to the Trump regime. Trump’s political movement is tied together and motivated by racial animus and hostility towards nonwhite people, as well as Muslims and other groups deemed not to be “real Americans.”

Trump’s response to the coronavirus pandemic is a way to channel such values. Dr. Justin Frank, retired George Washington University psychiatrist and author of “Trump on the Couch,” explained this to me in a recent email:

Learning that a disproportionate number of black- and brown-skinned people are dying from the virus makes it easier for him to open up the economy, precisely because they wouldn’t vote for him, are of no use to him, and are already objects of his malevolence. Just think about the Central Park Five or his derogatory comments about African countries. Donald Trump is his fathers’s son, beloved by the Ku Klux Klan.

White supremacists claim that nonwhite immigrants are inherently dirty or criminal, and are vectors for the “white genocide” which is being caused by America’s changing racial demographics and globalization. These views are now routinely mainstreamed on Fox News and in other parts of the right-wing echo chamber.

Since the ideology of white supremacy is based on a foundational lie that “white” people” are somehow superior to other groups, claims that “diversity” leads to weaker societies is not true. For one thing, race itself is a social construct with no biological basis; contrary to the fantasies of many right-wing “thinkers,” human beings cannot be bred like dogs.

In reality, the particular challenges of “assimilation” or “national identity” often faced by “multiracial” or “diverse” societies result from the angry and paranoid response of white supremacists and other nativists to those people they deem to be undesirable outsiders.

In the United States, that dynamic manifests by how it does not have the robust social democracy and health care system found in many European nations. White Americans and their leaders have historically been more invested in preserving the psychological wages of whiteness than in working together with nonwhite Americans to make a better society that would benefit everyone.

The U.S. government has been hollowed out through that logic, leaving it unable to effectively respond to the coronavirus pandemic. This is another example of the various ways in which racism and white supremacy hurt white people.

How will the history of America in the time of Trump’s pandemic be written?

Perhaps in the Newspeak pseudo-history of the future it will be written that Donald Trump saved the United States by personally defeating a real-yet-somehow-fake plague, an “invisible enemy” that was brought upon America by the Asians, the blacks, the Hispanics, Native Americans, the Jews, Barack Obama, the Democrats and the “fake news” reporters and journalists.

Truth is always one of the first victims of fascism. In that regard, American fascism is in no way exceptional.

Archbishop Nicholas Duncan-Williams has said wives who treat their husbands with disdain are ungrateful. In the same vein, it is