Nigerians on social networking platform, Twitter, are recounting how Isa Pantami, Minister of Communications and Digital Economy, blocked them for questioning him about his silence on the attacks by armed bandits in Zamfara and Katsina states.

While in the opposition in 2012, Pantami heavily criticised the handling of insurgency in Nigeria’s North-East by former President, Goodluck Jonathan.

He also said in an opinion piece published on an online news platform that “leadership in Nigeria has failed” and called on Nigerians to “rise up” and change the situation.

An audio where he incited Nigerians against Jonathan over his handling of security in the country has also been making the rounds on Twitter, with many accusing him of hypocrisy now that the party he belongs to, the All Progressives Congress, was in government.

One Twitter user with the handle @mbbhuarii, questioned why he was telling Nigerians on his page not to criticise him publicly.

@mbbhuarii said, “Exactly one year since Sheikh Dr. Isa Ali Pantami blocked me. I didn’t abuse or disrespect him. I only amplified the voices of those who felt that he cannot speak truth to power anymore.”

Exactly one year since Sheikh Dr. Isa Ali Pantami blocked me.
I didn’t abuse or disrespect him. I only amplified the voices of those who felt that he cannot speak truth to power anymore.

Pantami in his response said, “In Islam, we admonish in public when we have no direct access. Even in the previous administration, the last time I mentioned anything in public was in 2011, not 2015.”

Reacting to Pantami’s quelling of dissenting opinions, @Uncle_Faruk said, “If Pantami wasn’t critical of the former government, trust me no one will pressure him now.

“He unfairly condemned and pressurised GEJ administration for a reason best known to him. Now he is in government and you want us to keep mute? You’re stupid my brother.”

Another user @jrnaib2 said, “Pantami isn’t God. Pantami isn’t a prophet, Pantami isn’t a saint. He’s just an influencer who uses his influence and did campaign for APC at the same time hold PDP responsible for bringing Boko Haram and now the narrative is still the same. So we must blame him.”

We were offered N2m to assassinate Delta State politician —suspect 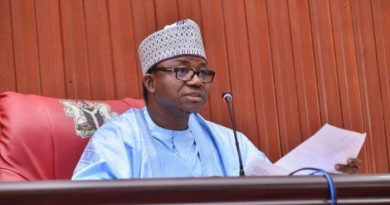