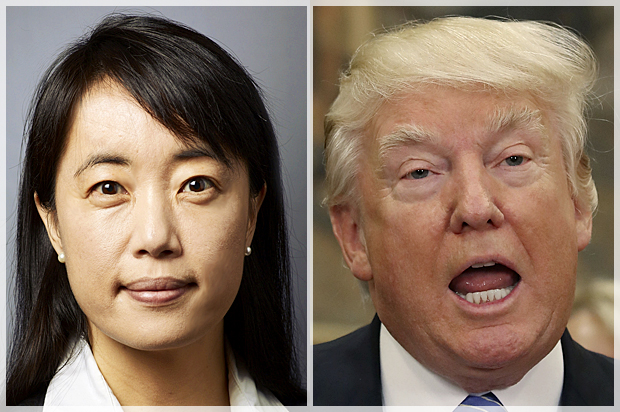 A Yale psychiatrist who has sounded the alarm on President Donald Trump’s mental health for the last several years is urging Congress to heed the warnings of mental health experts — as the president’s coronavirus response goes off the rails with new conspiracy theories about former President Barack Obama and attacks on female reporters.

Bandy X. Lee, a forensic psychiatrist at the Yale School of Medicine and author of the textbook “Violence,” called on mental health professionals to speak out early in Trump’s presidency and edited the bestselling anthology “The Dangerous Case of Donald Trump: 37 Psychiatrists and Mental Health Experts Assess a President.”

Lee told Salon that Trump’s baseless “Obamagate” conspiracy theory and his attacks on women reporters were further examples of his incapacity to lead. Lee also criticized Congress for ignoring earlier warnings from mental health professionals about the president’s actions.

Lee, the president of the World Mental Health Coalition, held a panel last year following the release of former special counsel Robert Mueller’s report, during which her group performed a mental capacity evaluation of the president. Their conclusions suggested that Trump’s bungled response to the pandemic was inevitable, she says. Lee warned earlier this year that we would see the “worst-case scenario.”

“The president’s goal is the same as ‘How to inflict the maximum damage possible,'” Lee said in an interview with Salon this week. “His psychopathology makes him avoid all the right decisions, while driving him to make all the wrong decisions, He has been visibly deteriorating, and his sheer desire to deny his failures may get us back to the U.K. group’s projections of 2.2 million deaths after all — and then there will be even more failures to deny.”

Lee spoke to Salon about Trump’s renewed attacks on Obama, his response to the health crisis, and what is really behind his attacks on women journalists. Lee stressed that her views represent only those of the World Mental Health Coalition and not Yale.

Trump has started pushing a new “Obamagate” conspiracy theory even though he has not said what crime he thinks President Obama or anyone else has committed. Where do you think Trump hopes this unspecified conspiracy theory will lead?

What we know is that Donald Trump lacks the mental capacity to fulfill his job — not just the presidency, but almost any job. How do we know? An independent and non-governmental panel of top mental health experts performed a standard mental capacity evaluation on the president, as a public service, when special counsel Robert Mueller’s report came out. The abundant, high-quality reports on the president’s performance at work, by close associates and co-workers under sworn testimony, were material we could only dream of having for mental capacity evaluations in our ordinary practice.

Astonishingly, the president failed every criterion. One of the criteria is the ability to be reality-based and not be drawn into conspiracy theories, as well as to consider consequences before making decisions. He was unable to do this, and this is apparently why he gravitates toward conspiracy theories like “Obamagate,” above all, to distract himself from his own failures. His disastrous pandemic response is exactly what we expect of someone who lacks mental capacity.

People believe mental health professionals only diagnose mental illness, but mental capacity and dangerousness are different evaluations that do not require a personal exam and have everything to do with fitness and public safety. The classroom teaching I did at Yale Law School for 15 years was mainly aimed at showing students when to consult — in other words, when they would reach the limits of their expertise as lawyers and need to ask for other input. The U.S. Congress is full of lawyers, and yet no committee has consulted us about a president who totally lacks mental capacity.

Trump abruptly walked out of a press conference after two women reporters confronted him over what he called a “nasty” question. Why did he respond that way?

We know that whatever he accuses others of is a confession about himself. So he is telling us he is “nasty.” He has also called Barack Obama and others “human scum.” Attributing others with one’s own faults can become dangerous. He may project his sense of inferiority and defectiveness onto weak and vulnerable groups, even more vehemently if they are capable women and minorities, and seek to destroy them in lieu of dealing with his feelings. I recently answered questions about whether his willful inactions count as genocide. While I believe they do, they are possibly worse, since one would potentially do anything not to face feelings of self-hatred, including destroy the whole nation if simply attacking his critics does not work.

Trump has found ample support among administration officials like Attorney General Bill Barr and Senate Republicans. Why are they so eager to back him up even though they would flip out if a Democratic president did any of the same things?

We should know by now that this has little to do with principles, conventions or the law. Mental health is a basic requirement for the functioning of rational systems, and it is unclear we have that. The replacement of competent individuals with sycophants, and the cooptation of institutions, is part of what we warned would happen in “The Dangerous Case of Donald Trump,” following our conference at Yale in April 2017. We know that 90% of deaths from COVID-19 could have been prevented if the president had heeded the advice of medical experts just two weeks earlier. We feel our nation would be in an entirely different place today if it had heeded the warnings of mental health experts three years, a year or even four months earlier when we were petitioning the Congress.

Do you think mainstream journalists are missing a key factor in Trump’s response to the coronavirus by ignoring warnings about his mental health?

No one is connecting the dots to the greatest calamity in the nation’s history, which is the president’s mental incapacity. This should be our biggest focus — even more so than the pandemic — since it is making the pandemic much worse, and even greater calamities are likely awaiting as the stress from the pandemic grows. Excluding mental health experts and replacing them with political pundits has been catastrophic, in my view, resulting in the gross underestimation and normalization of severe psychopathology. And, as we have seen, mental symptoms are even more contagious than ordinary infectious disease, since they transmit through emotional bonds alone.

Early in the presidency, the media and the public were very attentive, and the president’s mental impairment became the No. 1 topic of national conversation. Then the American Psychiatric Association stepped in with a new interpretation of the “Goldwater rule,” abruptly putting an end to the discussion in a way that puzzled me. Working at the interface of psychiatry and the law, I scrutinized its arguments, but the new ethics just didn’t pass ethical, scientific or even constitutional muster. A recent investigative article explains it all: Essentially, the APA distorted professional ethics the same way Bill Barr distorted the law to support power.

A past APA president who spearheaded this campaign became awash with federal funding, and we know, just as it attempted to do with Ukraine and the state governors, the Trump administration uses its purse to try to control science. We know because it froze funding for the World Health Organization to cover up its failures and recently ended funding for a team of disease ecologists that has already helped fight this pandemic, headed by Dr. Peter Daszak, one week after he said there was no evidence the novel coronavirus came from a Wuhan lab — one of the president’s favored conspiracy theories.

This interview was lightly edited for length and clarity.

Michelle Obama & Breonna Taylor portraitist on Black artists: “We’ve been here all along”