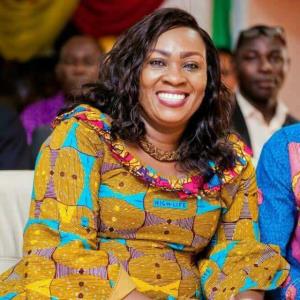 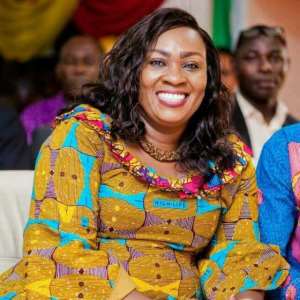 The NDC Communications Bureau of Mfantseman Constituency has listened with shell-shocked and disappointment, a pronouncement made by MP for Mfantseman, the 21% score Member of Parliament for Mfantseman on the ticket of NPP (Mr. Ekow Kwansah Hayford) being franked by MP for Awutu Senya East, who doubles as a minister for business development, Hon. Mavis Hawa Koomsonin aka there can’t be any meaningful dams etc response to questions from Mankessim Based Coastal FM morning show host, relatively to certain projects in Mfantseman.

In the pronouncement, the minister for special development was heard, and categorically stated among other things, that Mankessim Market, Saltpond Victoria park, and Yamoransa mini market are $1million per Constituency funding projects.

But, in the interview, you could hear that someone was behind coaching the minister on what to say, which belied all her claims. The MP for Mfantseman also rode on the back of blatant lies told by the minister coupled with the scathing response and by extension labelled the good (NDC) liars.

For the record, it is a trite knowledge that neither Madam Hawa Koomson nor Mr. Ekow Kwansah Hayford can subject themselves to any integrity test in order for them to call us liars. For Madam Hawa Koomson, she is among the tall lists of the corrupt appointees of Nana Addo to face trial in the next JM’s government for willfully causing financial loss to the state as far as one village one dam is concerned. Ghanaians have now noticed that the much- touted 1V1D was just for sloganeering and not meant to be fulfilled. “Otherwise this woman wouldn’t have admitted that GhC250, 000 could not build a meaningful dam and yet misapplied it on dugout or pond which all have dried up beyond recognition- clear insults to the Northerners”. A woman who expended Gh800,000 on just website needs no further particulars to put her behind bars.

Again, we actually took aback hearing the most underperforming MP ever in the history of Mfantseman calling us liars. On the lighter vain, one would ask the MP for Mfantseman why he even performed abysmally in the last survey conducted by the University of Ghana, political sciences department (21%) if indeed his assertions on the Coastal FM are factual?.

Today, people of Amasamkrom, the 21% MP cleared their farm lands without a dime under the the guise of 1D1F, are still gnashing their teeth for the unfulfilled promise. And this man calls us liars?.

Also, none of the toilet projects mentioned had even seen the light of the day. You promised one in Yamoransa and the trench has become a dead-trap. Such a disappointing MP called a party that has bequeathed the constituency so many tangible projects; Biriwa Policlinic, Saltpond Nursing and Midwifery Training College, Gyedu Ultra- Detached Police and Court Complex, almost (8) CHIPS Compounds, Saltpond Harriom and Mankessim Tarred Roads and many (completed and uncompleted projects) in all aspects of life within four years of the visionary John Dramani Mahama

We therefore challenge the MP, the 21% score man to point to us where exactly these projects under this failed initiative are?

On records, we cut sod for the Yamoransa market project in August 2015, funded by SIF (Local Government) and the Mfantseman Assembly then, at the time Mr Ekow Kwansah Hayford was somewhere in Tarkwa doing Galamsey, so how could one trust such an MP by attempting to attribute this project to $1million per constituency initiative when funds were secured and demolished old structure to commence work before we left power? Why the funding agency board at the site is still SIF and Mfantseman and not otherwise? Again, the Municipal Assembly secured £810 million trend facility to dredge and dessilt Mankessim Ansabora gutters, design Mankessim drainage roadmap etc,and so the assertion that NDC did nothing is a nonstarter.

Are the MP and his NPP really serious at all? Well, there is an adage that,” if the gods want to kill you, they first make you go mad”.

If not certain demands from land owners [very surprised tho…] would have finished yamoransa Market project before leaving office. However, the delay did not even change the scope nor the two funding agencies. Hon. Ekow Kwansah Hayford should prove us wrong with further and better particulars other than the bare facts general public know about . We, therefore, encourage the general public to disregard the blantant lies told by Hon. MP for Mfantseman and, treat his thoughts with disdain.

Reemphasizing four – year achievements under His Excellency John Dramani Mahama are: pavement of the entire mankessim market, adding over hundred more sheds, drainage system, 10km Mankessim asphalt projects (which has been halted, Krofu road (also halted) Krofu health centre, toilets facilities, installation of mankessim streets lights, building of lockable stores, school blocks, Gyedu Ultra Detached Circuit Court Complex, and Police Divisional Office, to mention but few projects saw the light of day under JM in mankessim alone, compared to your empty- touted projects. It is an insult to the people of Mankessim when Mr. Eow Kwansah an MP, who is a native of the area, can never boast of a fully fledged project in his four years yet got the nerve to lie. As we speak, the Astroturf he touted as his major project has turned a mirage, and nothing is actually happening after laying few blocks to deceive the people months ago. A situation that has angered the youths cautioning the MP to either reinstate the park into its real state or finish the AstroTurf before November this year. Such an MP got the nerve to call the visionary Party NDC liars? Are the above-mentioned projects in mankessim real or lies? A conundrum of questions to the people of the Mankessim to answer and judge.

We also state unreservedly, that, the MP lied again about the claim of ongoing Market project in Mankessim. There is absolutely nothing of the sort.

In fact, the plan to establish an Ultra- Morden Market like JM did in Kotokraba , has always been the ultimate priority to the NDC and work will commence as soon as we return to power God willing 2021 through a proper engagement with the Traditional Authorities, Agencies, Traders and all the necessary Stakeholders.

The funding processes in that regard were far advanced, to the extent that art design of the facility was mounted on the Mankessim roundabout (that Gh89,000 was used for painting alone, another scandal to be investigated properly and tried in when we assume office in 2021). We thought this govt would continue until the Visionary John Mahama visited Mankessim on 29th April, 2019 and reiterated his sure commitment to building Ultramodern Market for the good people of Mankessim God willing in his next govt – a news the markets women received with joy and in good faith ,knowing full well His Excellency John Mahama’s track records using Cape Coast, Biriwa, Yamoransa, Saltpond lockable stores, and projects in other places as precedents.

In fact, the NPP has only added few wooden shed which are no where near market complex after they had even evacuated a lot of women with no alternative to make a living . Again ,it also amounts to greater insults to the people of Mankessim from no less a person than Hon. Kow Kwansah Hayford ( Mr. 21%) a native of the place.

Today, several projects by the previous administration in the constituency have been left to rot, and still Mr 21% knows no shame to speak when he’s apparently preparing to handover to Hon. James Odzifo Essoun to restore the lost traditions and glory of Mfantseman as ministerial seat.

In conclusion, we are, one more time, giving Mr Kow Kwansah Hayford 24hrs to retract the untruth or arrange for a debate on his nonexisting projects and ours (NDC) on the very platform he used to peddle falsehold and insulted the people of Mfantseman, if he has balls.

Rwanda: Paul Rusesabagina must be guaranteed a fair trial