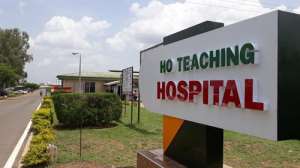 The Ho teaching Hospital has reopened its Accident and Emergency Unit after it was closed temporarily on Monday for disinfection, following the resuscitation of a 50-year-old patient who later tested positive for COVID-19.

The patient, who had lost consciousness when he was rushed to the Emergency Unit, received care from a number of health workers at the Accident and Emergency Unit of the Hospital, after which and the patient was observed to be exhibiting some symptoms of COVID-19

Samples from the patient sent to the UHAS lab showed that the patient had COVID-19, forcing the hospital to close down the accident and emergency department temporarily.

According to the Public Relations Officer of the Ho Teaching Hospital, Amos Dzah, about 30 of their staff who came into contact with the said patient have been asked to self-quarantine while other patients were relocated in order to pave way for the disinfection exercise.

“My information is that the patient was brought in on Sunday evening around 5:30pm, but he was unconscious, at the charge area they tried to revive him but they weren’t successful so other nurses and doctors had to join in to try and resuscitate the patient and fortunately they were able to do so. But upon further observations, they realized that the patient was exhibiting some of the symptoms of COVID so they quickly had to take a sample to UHAS for testing.”

He added that the staff would be tested to determine whether they had contracted the disease or not.

“After 2 hours the result came back from UHAS positive; and because they were all trying to resuscitate her it means they have all been exposed and other patients who were there have also been exposed in a way, so they had to close the place down, disinfect the place and bring the patients back.

“So that was done yesterday and this morning the place is working and back to normal. Some of the doctors and nurses were asked to self-quarantine while other health workers from other units are running the place. So as we speak now, the emergency unit is running” he added. Conflicts cause of poverty in Northern Ghana — NGO