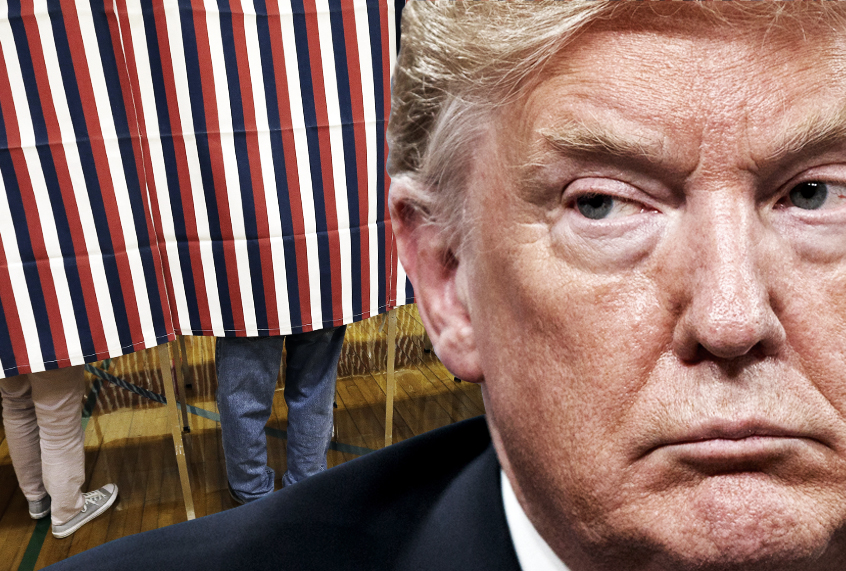 President Donald Trump demanded that votes from a new voting location in a Los Angeles suburb with a large black population “must not count” as he lashed out at California for its attempts to make it easier Americans to vote.

Trump over the weekend inserted himself into the special election in California’s 25th Congressional District, which was vacated by former Rep. Katie Hill, D-Calif., who resigned last fall. The president complained on Twitter that California Gov. Gavin Newsom, a Democrat, opened up a new poll site in Lancaster, which lies just north of Los Angeles, despite calls from both parties to do so.

“So in California, the Democrats, who fought like crazy to get all mail in only ballots, and succeeded, have just opened a voting booth in the most Democrat area in the State,” Trump tweeted. “They are trying to steal another election. It’s all rigged out there. These votes must not count. SCAM!”

Lancaster is, in fact, not the “most Democrat area” in California. The city’s mayor, Rex Parris, is a Republican. Lancaster is also represented by two Republicans in the state legislature, The Washington Post noted.

The move to open a new polling location came after Democrats raised concerns that the area, which has a large African-American population, “didn’t have an in-person voting place.” They argued that “voters who were more likely to vote in person on Election Day” were thus disenfranchised, according to the outlet.

“This is something the county should fix immediately,” Parris told a local news outlet last week. “There should not be even the appearance of affecting the outcome by limiting the ability to vote.”

The move was further necessitated by a massive reduction in in-person voting. While typical elections in the district have had around 1,000 polling locations, there will only be 13 in-person polling places Tuesday because of the coronavirus pandemic.

But Trump-backed Republican Navy veteran Mike Garcia seized on the president’s baseless allegation, accusing Smith and “her liberal Dem allies” of being “desperate and trying to change the rules to steal an election.”

Smith’s campaign accused Garcia and the president of pushing a conspiracy theory in an attempt to disenfranchise voters of color.

“Mike Garcia has made it clear from the start that he is in lockstep with Donald Trump and will put Trump’s needs before the district, leaving CA-25 residents to ‘fend for themselves,'” Kunal Atit, Smith’s deputy campaign manager, told CNN. “Now he is working with the president to weave baseless conspiracy theories to disenfranchise African-American and Latino voters and cast doubt on the integrity of our election. This behavior shows just how out of touch he is with our values.”

The Democratic Party also slammed the allegation, telling the outlet that “expanding voting access is NOT stealing an election, contrary to what Republicans in Washington may believe.”

Trump complained that the race was “rigged” in another tweet, because the election is “supposed to be mail in ballots only.”

The race was never supposed to a mail-only election, but the state has encouraged voters to cast ballots by mail to avoid in-person voting amid a pandemic. Newsom announced last week that the state would send every voter a mail-in ballot for November’s elections, a move which likewise drew complaints from the president.

“I think that mail-in voting is a terrible thing,” Trump said last month. “I think if you vote, you should go . . . There’s a lot of dishonesty going on with mail-in voting, mail-in ballots.”

The president met with aides last week to discuss legal efforts to push back on the calls to enact mail-in voting, CNN reported. The Republican National Committee has pledged $20 million to fight lawsuits brought by Democrats.

“I’m confused,” Salon contributor Dean Obeidallah wrote in a column at CNN. “Does Trump support any type of voting? After all, if you rule out in person and by mail, what’s left?”

Trump’s complaints about mail-in ballot voting appear to be based upon his admitted fear that “you’d never have a Republican elected in this country again” if voting were easier.

Five states, including Colorado, Hawaii, Oregon, Washington and Republican-led Utah already have all-mail voting systems in place. The Republican National Committee itself has encouraged supporters to vote by mail this year. In total, 23% of all ballots in the 2016 election were cast by mail, according to the Brennan Center for Justice, which reported that “as with in-person voting, the threat [of fraud] is infinitesimally small.”

Polls have found that a majority of Americans support allowing everyone to vote by mail permanently — not just as a precaution amid the coronavirus pandemic. Polls have also found that a large number of Republicans disagree, particularly those who watch Fox News.

“I think after 20 years, we’ve proven that our system is very secure and voters love it,” Oregon Secretary of State Bev Clarno said. “The voters voted it in, they’ve never made an attempt to vote it out. I think they’re happy with it, and I think it’s a 20-year history of success.”

Christian Leinbach, a Republican official pushing for all-mail voting in response to the pandemic, told The Philadelphia Inquirer that his own party’s arguments are outweighed by the public health crisis.

Press Watch: After all its great reporting, Washington Post self-gaslights on impeachment

Bauchi Gov-elect To Stand Trial Over False Declaration Of Assets

Ghana and Cote d’Ivoire have set their own prices for cocoa to counter unfair trade in the international market. To