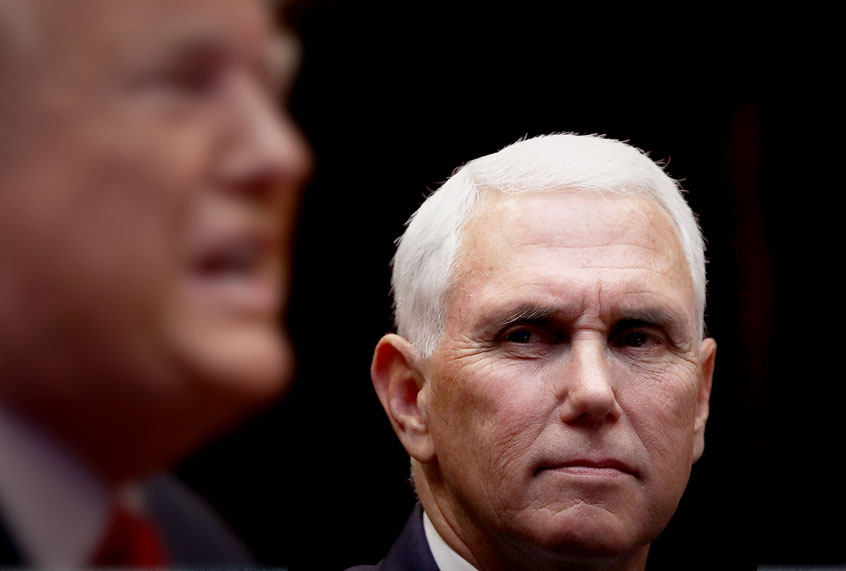 Miller tested positive just before departing for Iowa on Air Force Two along with Pence, Cabinet member Sonny Perdue and Republican Sens. Chuck Grassley and Joni Ernst, both of the Hawkeye State. Several staffers were asked to deplane.

Two days prior, a valet to President Donald Trump tested positive for the disease, reportedly sending the president into a froth. Katie Miller’s diagnosis, combined with her family’s proximity to White House senior staff, presents a uniquely close threat.

Katie Miller travels frequently with Pence and is often seen at the vice president’s side. Her newly-betrothed husband, a White House speechwriter and policy czar who confabs regularly with Jared Kushner and Ivanka Trump, has been one of President Trump’s most-trusted and sought-out advisers since the 2016 campaign.

The president attended the couple’s wedding, held in February at Trump International Hotel, where he toasted the couple.

“She’s a wonderful young woman, Katie. She tested very good for a long period of time,” Trump said Friday. “And then all of the sudden — today — she tested positive.”

“She hasn’t come into contact with me,” the president added. “She’s spent some time with the vice president.”

The White House claims that Katie Miller tested negative Thursday, and an administration official said that she had not had recent contact with either the president or the vice president.

“This is why the whole concept of tests aren’t necessarily great,” the president, who has been cheerleading an economic reopening, said. Health officials have strongly cautioned against doing so prematurely, citing inadequate testing and contact tracing infrastructure.

“The tests are perfect, but something can happen between a test where it’s good and then something happens,” Trump added.

“She was tested very recently and tested negative, and then today, I guess for some reason, she tested positive,” he continued.

The vice president was aware and “has done what he has to do,” Trump said.

Miller was accompanying Pence to Iowa, where the vice president was scheduled to discuss responsible religious gatherings with faith leaders and attend a meeting about securing the food supply. It is unclear if those meetings will proceed.

“I think he is on an airplane, going to some far away place, but you’ll be able to ask him later on. But they’ve taken all of the necessary precautions. I understand Mike has been tested — vice president — and he tested negative,” the president, who is being tested daily, said.

Pence was tested Friday and has also been tested daily, according to a senior administration official who briefed reporters traveling with the vice president.

White House press secretary Kayleigh McEnany told reporters at a briefing that the administration had “put in place the guidelines that our experts have put forward to keep this building safe, which means contact tracing.”

“All of the recommended guidelines we have for businesses that have essential workers — we are now putting them in place here in the White House so as America reopens safely, the White House is continuing to operate safely,” she added.

Administration officials have eschewed masks, including Pence, who was roundly criticized for neglecting to wear a mask when visiting staff and patients at the Mayo Clinic last week, in violation of facility policy.

Pence later admitted fault but pointed out that he was tested so frequently that he “didn’t think it was necessary.”

Manager of Shatta Wale, Bulldog has reportedly been arrested by alleged thugs from the presidency and dumped at Bureau of