Desperation gave birth to nepotism in addendum to modern slavery by the President Muhammadu Buhari regime. The rule of law has also been manipulated since the attainment of independence.

Abacha’s loot seems to be a source of joy for this administration and an opportunity to re-loot, while any suggestion to invest on human capital and ultimately boost the economy is considered a taboo.

The poverty rate in Nigeria is alarmingly high and a higher percentage of it comes from the North. The population density in the Northern part of the country serves as a reason for leaders in the region to hide under the guise of population growth to defraud ordinary northerners, because majority of them lack basic education.

The deliberate misleading claim of one Nigeria when one region is considered more important than others, has summarily overruled the power of the rule of law.

Insecurity has enchained a large portion of the North, whilst Boko Haram, bandits and herdsmen have turned the region into a business class of criminality, despite the billions of Naira allocated to the state governors as security votes.

President Muhammadu Buhari has long forgotten his famous slogan: “Corruption”, which was his favourite topic during the 2015 campaign, and which ultimately served as a vehicle that conveyed him to his eventual victory.

Abacha’s recovered loot seem to be owned by the North since the inception of it recovery.  The recent Abacha loot released by the US to the Nigerian Government has caused controversial innuendos in the country. The loot has been reportedly set aside to develop only the Northern part of the country at a time we are facing a global pandemic.

Deceit is not synonymous with wisdom. It is sad that this is happening at a time when the government needs to build world-class healthcare centres in all the 774 local government areas in the country to fight the pandemic and to reduce the spread of the virus and other similar diseases. It is a moment that the government ought to finance and mobilize researchers of local herbs and medical sciences to embark on various researches in a bid to beat COVID-19 and to subsequently have reliable facilities that we can rely upon in case of any future eventuality.

The sad story is that we live in a country led by wolves and hyenas, a country where its resources have consistently been left in the hands of a selected few who have mismanaged and plundered the future of several unborn generations.

If what took laughter away from the crow, had befallen the vulture, it would have been stuck on its eggs. If the Buhari regime is only considering the planned work of Northern agenda by leaving other regions to die on their feet or bow to the Northern leaders before they can survive the ongoing hardship and negligence, then there’s nothing like one Nigeria.

Why is it that the government is afraid of using the recovered loots for the re-construction and dualisation of Benin-Warri, Benin-Okene, Okene-Lokoja roads that are better described today as death traps? Lagos to Calabar rail line has long been abandoned, too. The re-construction of these roads will not only benefit citizens, it will inevitably boost the economy seeing that these roads serve as bridges between the North and the South, thereby encouraging consistent trade between the regions.

Our refineries have turned to abandoned project. Kaduna, Warri, Port Harcourt refineries are not functioning. We are importing what we have in billions because of the negligence of President Muhammadu Buhari who also served as the Minister of Petroleum. Leadership is not based on influences or years spent in an organization or a period during which one served as a public figure. Leadership is based on commitment, competence and consistency, all of which eventually birth trust.

The Nigerian system is promoting mediocrity and nepotism by deploying resources gotten from other regions to build up the North. It is as if other regions in the six geo-political zones are designed to worship and bow to the North!

The recent set of Abacha’s loots will soon be squandered, probably that will be the end of infrastructural development in the North, since Abacha, who massively plundered the treasury is from there. 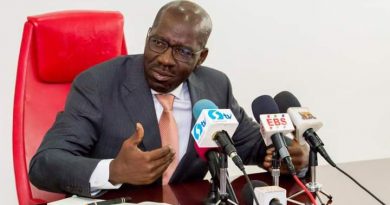