Mr Frank Fusieni Adongo Deputy Upper East Regional Minister and Member of Parliament (MP) of Zebilla Constituency has reiterated the need to collectively fight against the novel coronavirus, CSM and Cholera to protect the human resource of the country.

Mr Adongo made the call in a press statement signed by him and copied to ModernGhana News, urging residents in the Zebilla constituency to strictly adhere to the President’s directives on safety protocols against Covid-19 and other related diseases.

He said the Coronavirus was a threat to productivity because many workers and stakeholders who contribute in the building up the economy could no longer go to work due to the fear of contracting the deadly disease which retires the development of the economy in many forms.

Mr Adongo pointed that, in recognition of the threat of COVID-19 to life and its high potential to escalate in the country, the President has taken time to address the nation several times, on measures being taken by him and his government in response to this pandemic.

According to him, these measures are intended to limit and stop the importation of the virus, contain its spread, provide adequate care for the sick as well as limit the impact of the virus on the social and economic life of all Ghanaians, including the Zebilla Constituency and by far, the Upper East Region.

The MP lamented that the constituency was strategically located on the borders of Burkina Faso and Togo and as far as this pandemic is concerned, the communities which share common boundaries with these countries should take caution as many people have cross-border relations and clan-members across the borders.

He explained that as people continue to relate with these cross-border families and clan members there is the need to bear in mind that they were at risk, to the virus.

He stressed that, due to the official closure of Ghana’s borders with neighboring countries, there would be miscreants who may like to take advantage of the cross-border, blood relationships, to smuggle this deadly virus in and out of both territories, either deliberately or ignorantly.

He called on commercial transport operators, including motor-bike (okada) riders, tri-cycle(motor-king) riders, and donkey cart drivers, within Zebilla and its environs, to abide by the government’s directives regarding the closure of the borders.

The MP urged the people to continue to observe the protocols including avoiding crowded areas, avoiding hand-shakes, washing of hands with soap under running water, covering of mouths and nose while coughing or sneezing, reporting to the nearest health facility with symptoms such as fever, coughing, running nose keeping our internal and external environments clean, and devoid of all forms of filth.

He assured to continue to procure protective and hygiene materials for distribution to the various health care centers within the Zebilla constituency, adding that he was working hard at procuring more of these vital materials for further distribution, in order to add to the wonderful efforts of the President, in the fight against the virus in the area.

“Finally, it is equally important for all of us in the Upper East Region, to remember that we are currently within the heat season, and one of the diseases that has been common to us over the years, is Cerebrospinal Meningitis (CSM). I wish therefore to advise all of us in our various communities, within the entire Upper East Region, to take the necessary precautionary measures to avoid contracting CSM, alongside our fight against COVID—19”, he emphasised. 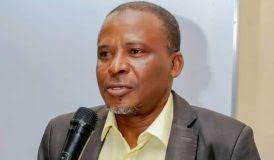 Reinventing Leadership In Times Of Crisis By Y.Z Yau