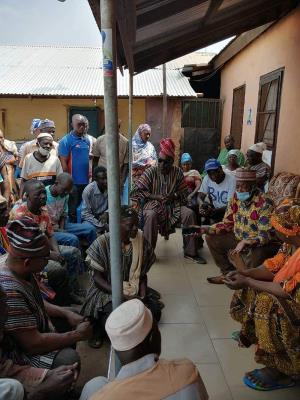 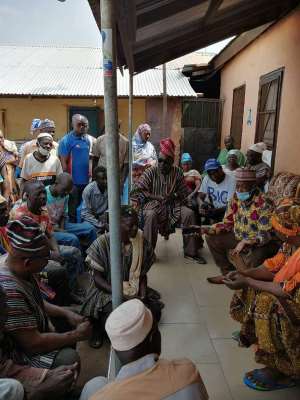 Picture shows the delegation and the MP seatedÂ

The chiefs and people of Dagbiribo-ari, a community in the Nalerigu/Gambaga constituency in the North East Region have rendered an unqualified apology to the Member of Parliament (MP) for the area, Hajia Alima Mahama for a purported rude behaviour exhibited against her by a section of the youth in the community.

Hajia Alima who is also the Minister of Local Government and Rural Development was reported to have visited the community on Wednesday, April 22 with some leadership of the party to interact with some delegates ahead of the party’s primaries as well as donate some items to the residents to help in the fight against the COVID-19.

The reports alleged that the MP was hooted at and chased out of the community by some aggrieved members of the NPP for allegedly failing to fulfil her promises.

A development which prompted a group calling itself Patriotic Communicators Front of the North East Region to issue a statement refuting the reports and describing it as “as malicious and desperate attempt to create bad press for the hard-working MP”.

To disassociate themselves from the said reports, a delegation led by chiefs including Mba Wudana, Mba Dinnobi Daana, Sulley and the assemblyman of the area on Monday, May 5, 2020, visited the MP at her residence in Nalerigu to apologize on behalf of the entire community.

According to the delegation, such incident never occurred in the community as been misreported in a section of the media, explaining that ” after the minister left, the Deputy Regional Minister was still in town to visit some elders on the minister’s behalf when some small boys by the roadside started making noise to convey their grievances to the Deputy Minister”.

They called on the general public to disregard such report which was geared towards tarnishing the image of the community and the MP, adding that achievement of the Hajia Alima was unmeasured and that they would continue to be proud of her.

On her part, the MP accepted the apology and thanked the chiefs and people of Dagbiribo-ari for their thoughtfulness.

.
She indicated that she had nothing against the people of Dagbiribo-ari since the people who were behind that agenda were minors who could easily be influenced by some faceless individuals to engage in such an act.

She urged the people of the community to remain calm and cooperate with her and the government as they work hard to provide them with the needed development.

“Dagbiriboari is one of the over 36 beneficiaries communities connected to be connected onto the national electricity grid within 3 years of my tenure as MP, it has also benefited from a CHPs compound, so though there are still challenges I am working hard to resolve them so I need your support ” Hajia Alima noted .

Why Moghalu Cannot Be Trusted By Kunle Wizeman Ajayi

The Executive Director of Alliance For Social Equity and Public Accountability (A.S.E.P.A) Mr. Mensah Thompson has observed that until government