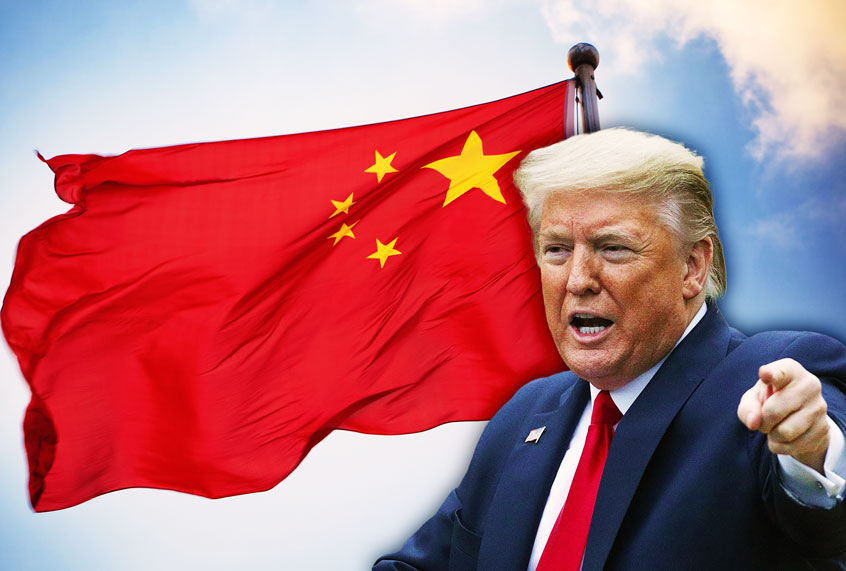 The last couple of weeks have obviously been very hard for President Trump. His public mood has been even more volatile than usual. What with being humiliated for showing his monumental ignorance on national television when he tasked his government scientists with studying the possibility of injecting disinfectant into the human body to “clean the lungs” and then finding out that his fantastic miracle cure, hydroxychloroquine, appears to make people worse rather than better, it’s been a rough time.

His White House coronavirus rallies have been canceled for the time being, cooler heads having evidently persuaded Trump that they were doing him more harm than good. Now he’s gone back to his usual short pool sprays and semi-formal events with visitors, where he takes a few questions until some staffer screams at the top of her lungs for the press to get out of the room immediately. The hope, obviously, is that he will get in less trouble the less he’s exposed to hard questions.

It doesn’t really help. He’s definitely brittle and out of sorts, resorting to the kind of magical thinking he was using back in January and February when he was living in denial about the approaching catastrophe.

Trump is also having a hard time dealing with “the numbers.” You’ll recall that just a month ago, out of the blue, Trump started talking about lifting the federal COVID-19 guidelines by Easter and “filling the pews” because someone had whispered to him that the “cure is worse than the disease.” Health experts rushed to show him models that showed millions of possible deaths if everyone just went back to “normal,” as he seemed to be suggesting. So he backed off and agreed to extend lockdown guidelines until the end of April. At the time he made it pretty clear that if we were below the then-proposed estimate of 120,000 deaths, he planned to take a victory lap. Since then, he’s gotten more specific — and a bit overconfident — and predicted that the total death toll would likely be between 50,000 and 60,000. We passed that number this week, with no particular indication that the end is near.

From the beginning, Trump’s primary goal was to “keep his numbers down,” but the virus just refuses to cooperate. With the willy-nilly reduction or abandonment of mitigation strategies all over the country, we can be pretty sure those numbers aren’t going down anytime soon. Most experts agree that there will be a spike in new cases in the fall.

But there’s another reason for Trump’s funk, and it also has to do with his numbers. I’m speaking, of course, about his poll numbers. Numerous reports in the press this week have suggested that Trump has been going ballistic over internal polls showing that he’s losing to Joe Biden, both nationwide and in key swing states.

CNN first reported that Trump had blown up at campaign manager Brad Parscale over the phone, screaming, “I’m not losing to Joe Biden.” This prompted Parscale to jump on a plane to D.C. to give the president some personal hand-holding. Having been soothed with some good old-fashioned magical thinking, Trump has now calmed down a little, and told Reuters on Wednesday that he just doesn’t believe the polls, not even his own:

I don’t believe the polls. I believe the people of this country are smart. And I don’t think that they will put a man in who’s incompetent.

I’m afraid that ship has sailed. And it’s not working out too well.

The strange thing is that the polls really aren’t much different than they have been all along. I think the real reason he was so upset is that he’s always counted on his rallies to serve as a check on the numbers, and to feed his ego. This is a person who believes his “gut” is infallible, and when he stands before his ecstatic, shrieking MAGA crowds, his gut tells him that he is beloved by the American people. With no rallies, he doesn’t get that affirmation and it’s bringing him down.

Meanwhile, the campaign is trying to get him to back off the day-to-day focus on task force matters and refocus the campaign on China-bashing. The New York Times reported a few days ago that Republicans are convinced “that elevating China as an archenemy culpable for the spread of the virus, and harnessing America’s growing animosity toward Beijing, may be the best way to salvage a difficult election.”

It’s a natural go-to for a man whose calling cards are racism and xenophobia. The problem here is that the administration is using the power of the federal government to help his campaign. Again. (You may recall he had a little impeachment issue a few months back about that very issue. No harm, no foul, apparently!)

Just a few days after the media reported on this big GOP plan, the White House decided to dust off the Dick Cheney playbook and instruct the intelligence community to find evidence to support the theory that the virus outbreak began in a government biodefense lab in the city of Wuhan.

On Thursday, they reported back and it wasn’t good news for Trump. They found no evidence that the virus was anything but naturally occurring. Of course. Trump wasn’t impressed:

Trump answered the follow-up question, about whether he had seen any evidence that the virus came from a lab by saying, “Yes, I have” but claiming he wasn’t “allowed” to say where he got the information. Since he didn’t get it from actual intelligence sources, it likely came from his team of medical and China experts — meaning Sean Hannity and Laura Ingraham.

Apparently, Trump wants people to believe the Chinese may have created or released a deadly virus in order to destroy his chances of re-election. He told Reuters, “China will do anything they can to have me lose this race.” As always, it’s all about him.

But that’s not all. Regardless of the truth of the matter, Trump is forging ahead with this plan to attack and punish China, as Dan Froomkin of Salon and Press Watch reported on Thursday evening. The New York Times reports that the Trump administration is discussing stripping China of “sovereign immunity,” which would hypothetically allow the U.S. or its citizens to sue the Chinese government, Trump’s favorite retaliatory gambit. According to the Times, “legal experts say an attempt to limit China’s sovereign immunity would be extremely difficult to accomplish and may require congressional legislation.” Unidentified White House officials have also reportedly discussed having the U.S. cancel its debt obligations to China.

That’s entirely absurd. Jonathan Chait at New York magazine points out “the blowback would be enormous” as “other potential buyers of Treasury bills would be demanding higher interest rates forever.” Talk about the cure being worse than the disease.

But none of this will actually happen. As Chait astutely observes, this is modeled on Trump’s famous promise that Mexico would pay for the wall — this time, China will pay for the coronavirus. It’s a campaign strategy, not a policy. With Trump, that’s all there is.

It’s just one more sign that an empire in decline goes slowly at first, and then all at once. And when a declining empire takes on a rising superpower, history suggests it won’t go well for the former.

Anxious about going out into the world post-vaccination? You’re not alone, but there’s help