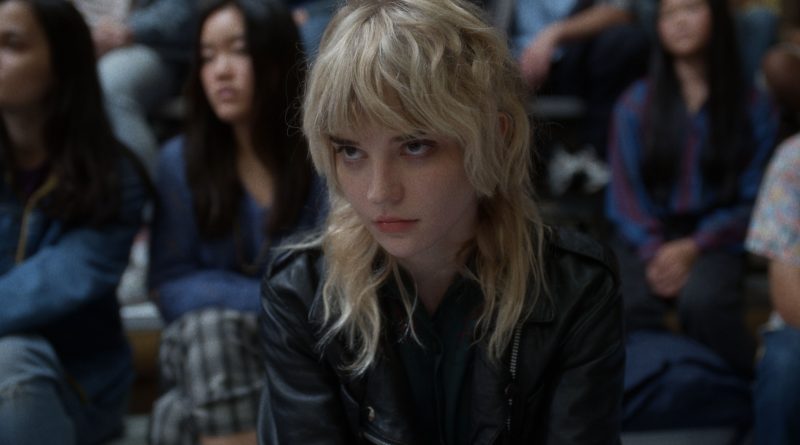 Listen, Sophie Thatcher knows she looks like an angsty teenager. It could be the sad, smirky smile; the dark, heavy-lidded eyes; or the voice—deep and raspy enough to make you wonder if she used to smoke. Or maybe it’s because she’s so often cast as the angsty teenager. Either way, it’s always a surprise when her performances are gentle, even tender.

Now 19 years old, the Evanston native made her TV debut in 2016 on Chicago PD, but her talent really gained notice when she starred in the indie film Prospect, a sci-fi Western that turned heads at SXSW two years later. Though she acted alongside Jay Duplass and Game of Thrones vet Pedro Pascal, it was Thatcher’s performance that carried the project…and most surprised critics. The Verge wrote, “The film hinges on Sophie Thatcher’s performance as Cee. In her feature-film debut, she brings a combination of determination and youthful naïveté to her performance that is essential to the entire movie working.” Added Slash Film, “It’s the kind of performance that should make her a star.”

It didn’t—not yet, anyway—but ears were perked. And Thatcher wound up clinching an audition to play Becky Munroe, the protagonist of When The Street Lights Go On, one of the new dramas from short-form mobile streaming service Quibi. You see, she auditioned for this role several years earlier, when the concept was first making the rounds as a full-length feature, then a scripted Hulu series, before finally landing at Quibi. The creators weren’t ready for her when she was 14. They are now.

In Quibi’s When The Street Lights Go On, Sophie Thatcher plays the quiet, detached Becky Munroe.

In Street Lights, Thatcher plays Becky, whose sister has just been murdered by an unknown killer while partaking in a clandestine hookup with her English teacher. Becky, the oddball of the family, is left not only traumatized but detached, drifting through the days that follow. She responds dating her sister’s suspected murderer, the stereotypical high school bad boy Casper Tatum (Sam Strike). Eventually, she befriends Charlie Chambers (Chosen Jacobs), a classmate and student journalist who wants to find the truth.

Street Lights isn’t perfect—there are too many loose ends and dramatic moments shoehorned in for drama’s sake—but what makes it worth watching is Thatcher. She takes the role of an angsty teenager with boys lining up to be with her and imbues it with a light and an edge that makes her a fascinating watch. You end up wondering if she murdered her sister. You question how she could fall for a guy like Casper. Then you watch her fall in love and stop questioning. You see the sadness in her heavy, aimless movements. You see the dormant energy behind her stare.

Over the phone, Thatcher is just as enchanting. She’s spending quarantine at home in Evanston, Illinois, trying not to worry too much about her next pilot, and making experimental music in her spare time. Read on for more about When the Street Lights Go On and what she has lined up next.

You grew up doing musical theater. How did Hollywood coax you away?

I wanted to challenge myself by doing something more naturalistic. I mean, I still love singing. The dancing part is kind of what threw me off [Laughs]. You have to be a triple-threat nowadays. And then you have to be a really high belter, and I was worried about straining my voice. There were a lot of things that pulled me out of it. I still love certain musicals, like Sondheim and Cabaret.

Your character, Becky, seems stereotypical at first, this grungy punk who’s the perfect foil to her pretty, popular sister. But there’s a complexity always winking beneath the surface. What drew you to her?

She was pretty similar to how I was back in school. I wasn’t the stereotypical misfit, but I was always just floating amongst the different groups, watching everyone from the sidelines like Becky. I felt removed from people—that’s how I pictured Becky felt before she met Casper. Chrissy, Becky’s sister, is complex, without a doubt. But Becky faces her complexity. Chrissy hides it. She pretends to be something she’s not. Becky won’t pretend.

I love how all these dramatic shifts in her life completely alter how she presents herself. She’s a bit of a chameleon in that aspect. She’s very vulnerable and very affected by what’s going on in her life. But then she has this underlying sadness within her. To me, that’s what made her light moments so much more realistic.

So why is Becky drawn to Casper, her sister’s suspected murder?

I think Casper is as far away as Becky can get from the world Chrissy lived in and the world their parents live in. She’s always been stuck in this bubble, and she doesn’t belong in it. But now she finds someone who can join her and observe everyone else from the sidelines. He brings out this other side of her, this confidence.

This show had such a long journey to the screen. Did it feel like a risk signing onto a project that had so much trouble coming to life?

I remember originally getting the audition when I was 14 and naive and thought I would just book every role, which is so wrong. And I was like, “Becky is me.” I was actually in high school and I was like, “That’s me, mom!”

But the thing that drew me in this time was [director] Rebecca Thomas. Working with her was just a dream. We come from similar Mormon backgrounds, and that’s what her first feature, Electrick Children, is about, so that already created a very strong bond.

I was in L.A. two months ago, and I finally watched [all of Street Lights]. I watched it on Rebecca’s iPad. I left feeling very proud of what I did, and I never really feel that way after watching something for the first time.

Tell me more about your music. Is it a hobby? What’s your genre?

It’s always hard to describe—I guess experimental pop. I sing in all my songs. I play guitar. I add a lot of samples. It’s very atmospheric. My favorite artists are Elliott Smith and Julia Holter. Music is the most important thing for me today, but I like that right now there isn’t much pressure. I’m not trying to make music that everyone will like. I don’t know if anything will happen with it, but during quarantine, that is what I want to focus on.

You recently worked on a Showtime pilot. Any news on that?

Yes, it’s with Juliette Lewis, and it’s called Yellowjackets. I play a young Juliette Lewis. It’s about this girls’ soccer team that travels to nationals, and then the plane crashes and it turns into this kind of Lord of the Flies–type scenario. It gets really, really dark. Everything is up in the air right now, so they have postponed it a couple months. We still don’t know if it’s going to series, but it sounds really good. People are liking it; I really hope it happens. To play a young Juliette Lewis is, like, the biggest compliment.