Yoruba social-cultural group, Afenifere, has backed a move by Osun State to deport some Northern youth from Zamfara State, who sneaked into Osun despite the lockdown.

Mr Yinka Odumakin, Secretary-General of Afenifere, in an interview with SaharaReporters, said the state was right to take the action considering the ongoing battle with Coronavirus.

He stated that some Northern states were also deporting youths back to their original states within the region.

The Osun State Government had raised the alarm over the influx of youths, mostly from Zamfara in recent days.

Special Adviser to Zamfara governor on Public Enlightenment, Media and Communications, Zailani Bappa, condemned the deportation, claiming that the Zamfara youth were Nigerian citizens, who could reside in any state in the country.

Odunmakin however, said there was nothing wrong with the deportation.

He said, “If there are people who are hindrances in Osun State, I do not think that they need to do profiling before they take necessary action, especially in this period that we are.

“Even all over the North, youths who are roaming about aimlessly are being round-up and taken back to their states of origin within the North and all the states that have done such thing did not announce their decision.”

He said the move should not generate friction between the two states, adding that Zamfara State Government would deport anybody making suspicious movement in its state.

He said, “I am sure that the governor of Zamfara, if he finds strange youth in the state at this stage that we are would take necessary actions that need to be taken. He would not be announcing that he wants to take any youth out of the state.

“It’s not a matter of states fighting; it’s just a fact that when you find strange people who are not members of the community, or communities members who return, you have to be inquisitive.” 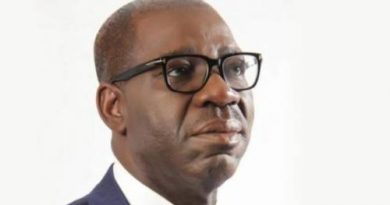 THIS IS AN ADVISORY FOR YOU AS THE NATION TURNS 60 WITH NO PLANS FOR YOU...

Pay a visit to a market where they sell bulk materials, pick good designs and I tell you, the guys who will sew it for you are just within the same Market. You can start this business with less than N100,000 and diligently grow your money.

A sweet side hustle. There are some good tailors in most of our towns or better learn the skill. It will save you all the heartbreaks imaginable. Taiwo Street in Lagos Island or Forestry Road in Benin for instance,is where you should be. Materials ranging from N700 – N1,000 per yard, sew for N1,500-N2,000 and sell for N5,000-N7,000.

You can get one for as low as N300. All you need is to package it in 3s and market. You can advertise your boxers on social media instead of hailing the politicians who have arrested your development. 3s pack boxers goes for N1500-N2500. Sell yours for N1200 and gradually grow.

You can a get POS machine from your Bank, and activate online banking: If you live in a place where banks aren’t much ,you can handle e-payments for people and make your small change. I paid someone N200 to withdraw N10,000 in Ikorodu. ATM queue was crazy.

Mobile and electronic Accessories such as Pouches, Chargers, USB cables, HDMI cables, earphones and more, can be sourced on Alibaba, Ali Express, Deal Extreme, etc. The more you buy the lower the price. And they are light so shipping won’t be a burden. Sell on social media or Jumia and co.

The beauty of this is that when properly made, its aroma will attract its customers. Manual sealing machine -N7,000/9,000 Popcorn Machine is N65,000 on Jumia. Popcorn can be served anywhere. It costs less than N40 to make a pack of popcorn.

Football team supporters always want to show how much they’re rooting for a team.Learn how to brand souvenirs and shirts.

Snail farming in Nigeria is even more popular due to its relatively cheap cost of startup and If you market your products well, your business will thrive. This is a business you can start from your backyard. Bear in mind, snails take almost a year to mature ,so patience is key!

Fairly used goods such as Jeans, Tops, shoes etc. They can be sourced at Badagry or even Cotonou. N100,000 can’t get you a bale but you can select and mix them. Wash then and pack neatly. Marketing is all it takes. You’ll sell and see your money multiply.

Some people find it hard to clean their apartments ‘cos they’re busy from Monday to Friday and Saturday they have engagements and on Sunday, all they wanna do is rest. Your tools won’t cost you up to N30,000 and you can clean 6 apartments on a weekend.

You can cook a variety of meals well and apply customer service, People will pay good money for your services, You can run this from home.

The success of any business is in its ability to effectively reach its teeming customers and this is achieved by effective marketing: Get a used laptop and smartphone, temporarily.Your smartphone can double as your hotspot. Persistence and passion is key.

This is one business that always comes to play.People celebrate and bakers are always consulted.

Aso-oke beading and stoning have become something in vogue now and this is another sweet business one can start with N100,000. You just have to learn how to bead and unlock your creative mind.

I’m not sure there’s really much to say here. All you need is training, passion, creativity, unique designs and styles, then adequate marketing. You absolutely don’t need N100,000 to start this.

This is another profitable small-scale business. The beautiful thing about this is that you take your services to your clients for an extra token above the regular fees. The starting capital to get the equipment is very minimal and I’m sure you know we have rechargeable clippers at affordable prices.

No matter your age, this is another well-paying job either as part-time or full-time. Many families are willing to spend what it takes for their children’s success and there’s one subject you’re well versed at. Just close the gap and meet their need for a fee.

Forget the extensive coverage of internet and the fact that people can assess it on their phones, Do you know how much applicants pay just to have Jamb applications filled online? You need a good system, printer & ISP. People pay as much as N1,000 per application

You’d realize the importance of this combo can't be ruled out. You can render these services with N100,000 startup capital + proper marketing, branding and packaging.

*20. RE-INVEST YOUR SEED CAPITAL IN AN EXISTING BUSINESS.*

Not everyone has the head for business but they can sniff opportunities. You can always sow your money as operating capital and draft an agreement on profit sharing. You can at least support your investment by bringing customers so the business can thrive. Market it on all your social media pages and who knows.

Truth is there so much one can do with very little.Iit takes persistence, focus, interest and above all,hard work.

We can’t all be rich but we all shouldn’t be poor.

*If you will only humble yourself, you will make it*

*Thanks for taking time to read through.*

Happy birthday mamaHappy 93rd Birthday Mum.
Join me in Celebrating the vessel through which GOD brought me into this world.

Happy Birthday Mother! We love you 😍

Who are the most faithful husband in relationships?
Military men
Pastors
Musicians
Politician. ... See MoreSee Less

None of d above

Non of the above.

Non of the above

None of the above.