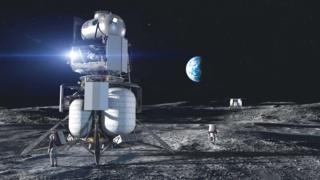 Nasa has chosen the companies that will develop landers to send astronauts to the Moon’s surface in the 2020s.

The White House wants to send the next man and the first woman to the Moon in 2024, to be followed by other missions.

The 2024 mission will see astronauts walk on the Moon’s surface for the first time since 1972.

“With these contract awards, America is moving forward with the final step needed to land astronauts on the Moon by 2024, including the incredible moment when we will see the first woman set foot on the lunar surface,” said Nasa’s administrator Jim Bridenstine.

“This is the first time since the Apollo era that Nasa has direct funding for a human landing system, and now we have companies on contract to do the work for the Artemis programme.”

The winning lander concepts take different approaches to the challenge of setting humans down on the lunar surface.

Blue Origin, founded by Amazon president and CEO Jeff Bezos, is partnering with Lockheed Martin, Northrop Grumman and Draper to build its lander. Bezos’ firm is the prime contractor in the partnership which has been dubbed the “National Team”.

The concept is designed to be launched on Blue Origin’s New Glenn and ULA’s Vulcan rocket systems.

Dynetics’ spacecraft concept is a single-stage structure that will launch on the Vulcan rocket. According to Lisa Watson-Morgan, the human landing system program manager at Nasa’s Marshall Space Flight Center in Huntsville, Alabama, this design features a “unique, low-slung crew module, putting the crew very close to the lunar surface for transfer and access”.

SpaceX’s design is the Starship, which will use the company’s Super Heavy rocket for launch. A prototype of the craft has been undergoing testing at the company’s Boca Chica test site in southern Texas.

The other other key elements in Nasa’s Moon plan are further along in their development. Astronauts bound for the Moon will launch from Earth in a capsule called Orion atop a powerful rocket known as the Space Launch System (SLS). Nasa also plans to build a small space station in lunar orbit, known as Gateway, where different lander stages could be assembled.

However, last month Gateway was removed from the “critical path” for 2024’s initial return mission. But during a news conference on Thursday, Mr Bridenstine reiterated the agency’s support for Gateway. It won’t be used by the Artemis-3 mission in four years, but will happen eventually: “We absolutely need a Gateway,” he said.

Douglas Loverro, associate administrator for Nasa’s Human Explorations and Operations Mission Directorate, commented: “With these awards we begin an exciting partnership with the best of industry to accomplish the nation’s goals. We have much work ahead, especially over these next critical 10 months.”

In the 1960s and 70s, Nasa launched seven missions intended to land on the Moon under the Apollo programme. Apollo 13 did not touch down after an oxygen tank exploded. The last crewed mission was Apollo 17, which explored the Moon’s Taurus-Littrow valley in December 1972.

But this time, Nasa wants to establish a long-term presence.

“We’re not going back to the Moon to leave flags and footprints and then not go back for another 50 years,” Jim Bridenstine said last year. “We’re going to go sustainably – to stay – with landers and robots and rovers and humans.”

The space agency is acting on a space policy directive signed by President Donald Trump in 2017. It instructs Nasa to return American astronauts to the Moon, and on to “other destinations”.

Some in the spaceflight community see the Moon as a potential testing ground for capabilities that would help humans perform a successful journey to Mars sometime in the coming decades.

SpaceX included plans for an uncrewed test landing on the Moon in its proposal to Nasa. Dynetics says it will perform a demonstration flight to test key capabilities for its lander system prior to a mission to the lunar surface.

TikTok: Should we trust the Chinese social-media video app? 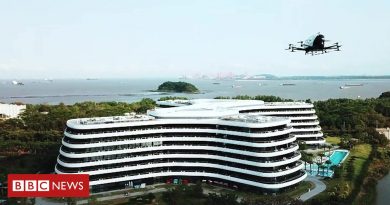 Some 311 new cases of covid-19 have been confirmed. This pushes Ghana’s cumulative count to 16,742. This was contained in

We are winning war against COVID-19, says Ganduje