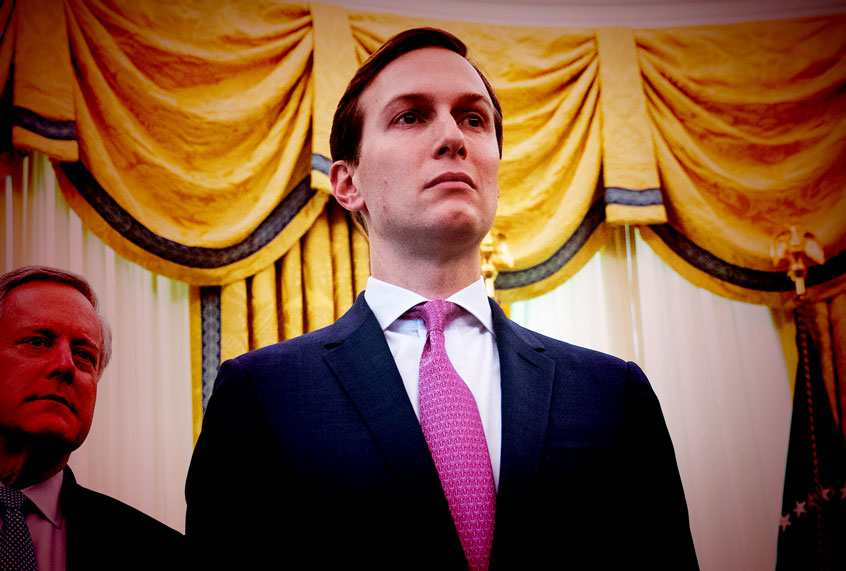 There’s a lot of sport made on social media over the fact that Donald Trump Jr., in his desperation to be more like his sociopathic father, is dating his stepmother’s doppelganger, in both age and looks. But spare some palace-intrigue armchair psychoanalysis for the fact that Trump’s daughter Ivanka grew up to marry a man who is startlingly like her daddy.

Jared Kushner’s softer voice and ability to dress himself fooled many political observers into thinking he would be a moderating presence on his father-in-law in the early days. But by now even the most appearance-bamboozled pundits must accept that in all ways that matter, Jared is virtually identical to Papa Trump: He’s as arrogant as he is incompetent, he’s assured of his own expertise on matters he has barely paid attention to, he’s shameless in his lying, and he’s fully confident he can bulldoze his way past his myriad failures simply by declaring himself successful.

“This is a great success story, and I think that’s really what needs to be told,” Kushner said on Fox News Wednesday, struggling to hold back a smile. And yes, he really was talking about the Trump administration’s response to the coronavirus pandemic. Seriously.

Kushner bragged about how the ” federal government rose to the challenge” and “achieved all the different milestones that are needed” and then, to make the whole thing even more of a rhetorical nightmare, predicted that by July “the country’s really rocking again.”

He said this on the week that a certain “milestone” had, indeed, been achieved: The United States surpassed one million confirmed coronavirus cases, more than four times the number in Spain, which has the second-highest official case count. (No one is quite sure how badly China has been hit, with a government that is notoriously secretive, and a population several times larger than ours.) The U.S. death toll has already topped 60,000, which is no doubt a significant undercount, as analysis of overall death rates in the country suggest a lot of people are dying of COVID-19 and not getting officially counted.

Another “milestone” for the “great success story” Kushner is touting: More than 30 million unemployment claims filed in six weeks, which is nearly one in five American workers.

Kusher, like his father-in-law, comes from the sleazier corners of the real estate world and so no doubt has developed the same habits of smoothly lying about serious problems with properties and wildly exaggerating the value of his assets while bamboozling investors. Kushner is, after all, a notorious slumlord.

Now he’s just doing to the entire country what he did to his unfortunate tenants. But instead of ignoring rats and cockroaches and leaky plumbing while posing as a real estate mogul, Kushner is now shrugging off thousands dead and millions infected or unemployed, while trumpeting his “great success story.”

That Trump would let anyone as boastful as himself come so close has always been a surprise — narcissists don’t like competition — but ultimately, it appears he’s so flattered that Ivanka wanted to marry someone like Dear Old Dad that he keeps Jared around as a constant reminder.

Kushner’s preening is all the more disturbing because there’s good reason to believe that he’s second only to Trump in causing this crisis to spiral as badly out of control as it has.

In a piece headlined “Inside Donald Trump and Jared Kushner’s Two Months of Magical Thinking,” Vanity Fair reporter Gabriel Sherman reports that Kushner “shared Trump’s view that the media and Democrats were hyping the crisis for political purposes,” and spent months encouraging the president to ignore more than a dozen warnings, dating back to last year, from intelligence officials and health agencies about the virus and its likely economic impact.

One White House official even went as far as to tell Sherman that Kushner “is running everything” and is the “de facto president,” an accusation that is entirely believable in light of reports that Trump is too lazy and self-obsessed to do any work besides tweeting, watching TV to “monitor” his own press, and ranting at reporters in daily press conferences that were originally supposed to be opportunities for serious public officials and health experts to share news about the coronavirus.

Not that Kushner getting involved and running things has helped the situation. If anything, it appears to be making things worse. Sherman reports that Kushner’s “famously unshakable belief in his own judgment” led him to repeatedly tell federal officials that there was no need to take the coronavirus too seriously. Kushner simply assumed his desire to believe this wasn’t a real problem constituted a stronger understanding than that provided by actual experts in epidemiology.

Like Trump, Kushner has spent his life surrounded by people who, because his family has money, are willing to pretend his failures were successes. Kushner famously didn’t have the grades to get into Harvard, so his father paved his way in with a generous donation. He’s been failing up ever since, from annoying the harried journalists at the New York Observer with his mansplaining after he bought the paper with Daddy’s money to finding himself as de facto White House chief of staff for no other reason than that he married well.

Kushner’s “great success story” is being compared to George W. Bush’s infamous “Brownie, you’re doing a heck of a job” line, uttered to FEMA director Michael Brown in the wake of the 2005 Hurricane Katrina disaster that left bodies floating in the streets and people camped for days in hellish conditions in the Superdome. That line was memorable because “Brownie” had failed so utterly, for which he eventually resigned, but also because Bush’s frat-style nickname was a reminder that Brown had gotten his position not because any expertise or relevant experience, but because Bush liked giving cushy jobs to Republican loyalists.

This situation with Kushner is arguably even worse. Unlike with a hurricane, which can only be predicted a few days in advance (and not with much precision), Kushner he had months of warnings that the pandemic was coming, and blew it off because the preparation needed to minimize its impact would have taken hard work and expertise of the sort that Kushner has spent his life avoiding. Instead, it was clearly easier for him to ignore the problem in hopes that it would go away.

In fact, as this interview shows, Kushner is still ignoring the problem, choosing to assure the public that things will be back to normal in July, even though that is literally impossible. Even if we already had the testing and tracing protocols needed to begin considering a return to normal life (which we don’t), the process would be gradual. The economic impact of what will likely be a 20% unemployment rate, if not higher, doesn’t vanish overnight, but will reverberate for years to come.

But even talking about this alternate universe where we have sufficient testing is a joke. Trump, with Kushner at his side, made damn sure that the testing was slowed down because he wanted to artificially deflate the official coronavirus caseload. The president clearly continues to believe that we don’t actually need mass testing, and that simply lying to the public and claiming we have tests when we don’t will suffice.

All the White House gift-shop commemorative coins in the world — surreal and delusional as they are — can’t hide the dead bodies and the lost jobs. Jared Kushner may have failed upward his entire life, no amount of self-congratulation will fool people into seeing this coronavirus disaster as anything but the epic fuck-up it truly is.

15,802 people were reported dead in Ghana from cancer in 2020, according to Global Cancer, Mortality and Prevalence (Globacan) 2020