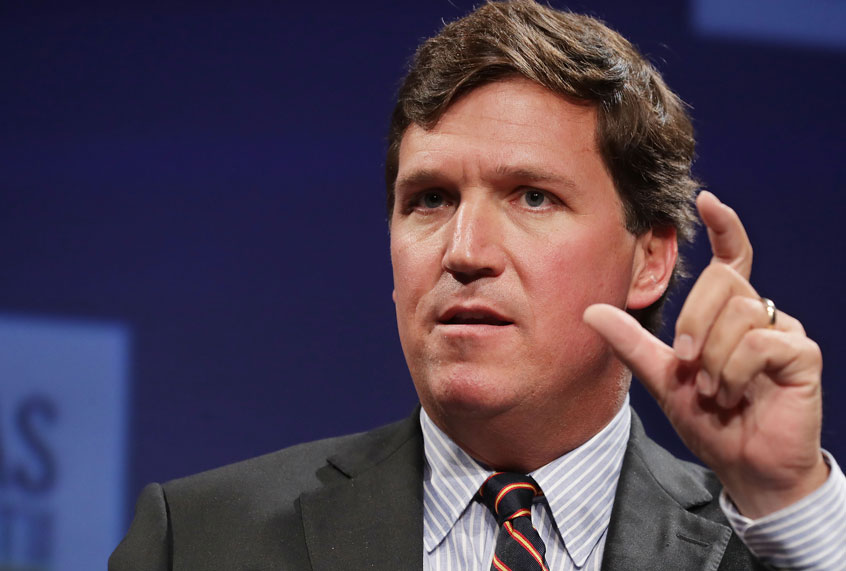 “The question at issue is one whose answer should be obvious to everyone: Is this disease really as deadly as the vast majority of experts tell us it is? As we’ve all seen with our own eyes?” Hayes asked. “Last night, one host told his viewers that experts are wrong. We should lift the lockdowns, because it’s not as deadly as we thought.”

The night before, Carlson downplayed the coronavirus death toll by likening a pandemic which has killed more than 57,000 people in America to the flu.

“We are happy to say that curve has been flattened,” Carlson told his 4.5 million nightly viewers on Monday. “But it’s likely not because of the lockdown. The virus just isn’t nearly as deadly as we thought it was — all of us, including on this show. Everybody thought it was, but it turned out not to be.”

That’s when Hayes exposed the source of those false and debunked claims being peddled by Carlson.

“But Tucker Carlson based his claim, in part, from two doctors who own an urgent care center in Bakersfield, Calif,” he continued. “And they say their research found the coronavirus is basically no worse than the flu.”

“Now, of course, most public health experts have dismissed these doctors’ findings,” Hayes added. “According to the University of Washington biologist Dr. Carl Bergstrom, who specializes in infectious disease modeling, ‘They have used methods that are ludicrous to get results that are completely implausible.'”

The MSNBC host also cited a joint statement from the American College of Emergency Physicians and the American Academy of Emergency Medicine, which condemned the Bakersfield pair for releasing “biased, non-peer reviewed” data in an apparent effort to “advance their personal financial interests without regard for the public’s health.”

“Get this: Even YouTube took down a video interview of these doctors” for violating its policy against coronavirus misinformation, Hayes said.

Carlson ignored the incident in a later screed against perceived censorship on the platform, claiming that “Big Tech does not believe you should be allowed to think” about ideas that challenge the medical consensus as he cited a deleted Rudy Giuliani tweet about the same treatment.

“Soon, they’ll be telling you that Fox News — not China — caused this pandemic,” Carlson said at the time. “In fact, many are saying that now. How long before they start claiming that in the name of public health — Fox News must be suppressed? Paranoid? OK, you watch. That’ll happen.”

Hayes put the conservative network on blast as he played a series of clips of Fox News personalities espousing misinformation.

“At the beginning of this horrible period, the president — along with his lackeys, and advisers and propagandists — they all minimized what was coming,” he said. “When the toll became too great, when the facts could no longer be ignored, many of these same people started then taking the virus seriously. And yet, now — now after nearly 60,000 of our fellow Americans have been lost to this vicious virus — they are back to where they started: suggesting it’s not that dangerous.”

The MSNBC host then couched Carlson’s hypocrisy in the context of Fox News’ own policy.

“There is a reason many of the employees of Fox News, which is based in New York, are working from home right now. At least someone there understands why it is important to continue to keep physical distance,” Hayes said. “That is what ordinary, everyday working Americans have bought the time to do with their own sacrifices. And yet, Tucker Carlson, who has been broadcasting in safe isolation, is telling you it’s safe to go out.”

Hayes was not the only person to call out Carlson, who frequently uses his platform to peddle white supremacism. Rep Ted Lieu, D-Hawaii, also shot back at the Fox News host’s attempt to downplay the coronavirus death toll.

“The family members of the over 56,000 Americans who died from #COVID19 in less than two months would disagree with @TuckerCarlson,” Lieu tweeted. “And the current case fatality rate in the US is over 5.6%. Simply unacceptable that @FoxNews keeps ignoring science and downplaying the virus.”

A recent University of Chicago study found that “greater viewership of ‘Hannity’ relative to ‘Tucker Carlson Tonight’ was strongly associated with a greater number of COVID-19 cases and deaths in the early stages of the pandemic.”

“If Tucker Carlson truly thinks people need to get back out there, he can help,” Hayes said. “Because right now, they need people in assisted living facilities that have been decimated by this. And they need people in meat and pork processing plants, too. They’ve lost a ton of people to this disease. So get in there if you think it’s that bad, go chop up some pork.