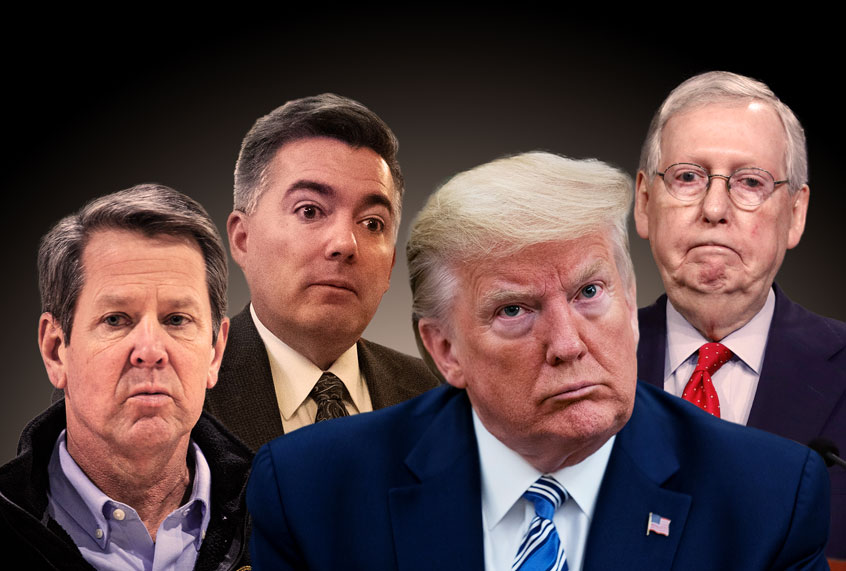 Donald Trump’s approval ratings over the coronavirus pandemic are in free fall, having tumbled 10 points over the last month, to 39% in a new Emerson poll. This comports with the FiveThirtyEight tracking of Trump’s overall approval, which shows that after a short rally-round-the-flag response to the coronavirus, the public is starting to understand that the man who goes on TV and suggests injecting household cleaning products is a complete imbecile. Moreover, he’s the principal reason the U.S. has a massive shortfall in testing and four times as many official cases of COVID-19 as the second most hard-hit country, Spain. (This is without taking into account, unfortunately, how much the Chinese government may have fudged that nation’s numbers.)

That said, Trump’s overall approval numbers still aren’t dipping below his baseline of about 42%, which appears to be immovable. That’s because Trump’s base voters care about sticking it to the liberals more than they care about anything else, including their own health, their jobs or protecting our country from total collapse.

That puts Republicans running in 2020, especially endangered incumbents in swing states, in quite a bind. Yes, we’re talking about you, Susan Collins — along with other precarious GOP senators like Cory Gardner of Colorado, Thom Tillis of North Carolina and Martha McSally of Arizona. To align themselves fully with the orange overlord is to alienate the possible swing voters who aren’t too keen on the “inject disinfectants” platform. But if they try to distance themselves from President Clorox Chewables too much, they risk bringing down Trump’s Twitter wrath unto them and alienating those base voters they will absolutely need to have any hope of surviving what looks to be a tough election cycle for their party.

Not that anyone should feel a moment of pity for any single Republican on Capitol Hill. Democrats gave Republicans a golden opportunity to remove Trump earlier this year, after the House of Representatives impeached the president in December on charges of abuse of power and obstruction of Congress related to his blackmail scheme against Ukrainian President Volodymyr Zelensky.

But rather than take that impeachment for the gift that it was — an opportunity to remove a chaotic presence who constantly undermines the party with his erratic behavior — Senate Majority Leader Mitch McConnell rallied his troops. With the sole exception of Utah Sen. Mitt Romney, every single Republican voted to acquit Trump, avoiding the easy escape hatch of replacing him with Vice President Mike Pence, who may be a right-wing Christian dingbat but at least isn’t a chaos monkey who screws over everyone he meets, even his own political colleagues and supporters.

The conundrum Republicans created for themselves, by not dumping Trump when they had the chance, is evident in the fight between the president’s re-election campaign and the National Republican Senatorial Committee.

On Friday, Politico reported that the committee, which advises Senate candidates on their runs, issued a memo advising candidates, “Don’t defend Trump,” Instead, the memo suggested that when GOP candidates are asked by reporters or voters about Trump’s massive failures in dealing with either the coronavirus pandemic or the devastating economic fallout, they should try to change the subject and “attack China.”

From the standpoint of pure, ruthless politics, it’s good advice. Trump’s behavior has been indefensible, ages before the injecting-disinfectant debacle. Trump spent months ignoring the crisis, and even when he sluggishly began to deal with it, his major priority was to slow-walk the coronavirus testing that’s necessary to reopen the economy because he’s worried that a higher caseload makes him look bad. Trying to change the subject may be cynical and amoral, but it’s definitely a smart call for Republicans. If Collins, Gardner, Tillis and other Republicans in tough races want to get voters above that 42% Trumpian baseline, they need to portray themselves as not as incompetent as their massively incompetent leader.

But Trump, who has no loyalty to anyone but himself, was predictably enraged by the memo and lashed out, sending political adviser Justin Clark out to threaten Republicans who tried to distance themselves from Trump by saying, “Candidates will listen to the bad advice in this memo at their own peril” and “Trump enjoys unprecedented support among Republican voters.”

That may be true, but with anyone outside the core Republican cult movement, Trump is increasingly and correctly viewed as the reason this country is falling apart. Senators like Gardner, Collins, Tillis, McSally, Joni Ernst of Iowa, Steve Daines of Montana, Kelly Loeffler of Georgia and possibly even McConnell himself will need to snag at least a few Trump-skeptical voters if they’re going to win and hold onto their Senate majority.

To make it worse, even if Republicans do back up Trump’s erratic views and behavior through the coronavirus crisis, he’s likely to throw them under the bus for their loyalty.

That’s what happened to Georgia Gov. Brian Kemp, after all. Kemp picked up on Trump’s extremely unsubtle hints that he wanted states to “reopen” and let the virus run rampant, in the misguided belief that doing so will lead to an economic recovery. (In fact, odds are that such a reopening will just make more people sick — and make the economy worse.) Kemp also made doubly sure that was what Trump wanted by talking to the president privately and getting his support.

Then, when Kemp announced his plan to reopen Georgia, Trump — who has no shame and feels no loyalty to anyone — acted surprised by all this, saying he “wasn’t happy” with Kemp’s choices, which had clearly gone too far. It’s no mystery  what Trump’s game is here: He wants to claim he’s trying to “reopen” America, but also wants no responsibility for the possible death and economic devastation that might cause. He’ll take credit for anything that goes well, of course, but anything that goes wrong is foisted on the governors.

There’s simply no winning with this guy, and Republicans should have realized that long ago. Sure, there would have been some short-term political pain as the base whined and cried about the removal of Trump, but in the long run Republicans would have been much better off without him. Pelosi gave them the gift-wrapped opportunity they needed to rid themselves of this chaos-demon before he screwed them over in ways they legitimately may never recover from. They turned her gift down, and now they’re looking at Great Depression levels of unemployment, soaring death rates and a president who looks at this disaster and starts spitballing about how maybe the solution can be found in the household products aisle at Walgreens.

But feel absolutely no pity for Republicans. Yeah, and I mean none. They made their deal with the devil and it looks like the bill is coming due.

Longtime GOP consultant: This election “is the most dangerous period since the Civil War”