Mr Okundia spoke to journalists in Benin on Tuesday.

According to him, since the first outbreak of Coronavirus in the state, a total of 254 suspected cases have been tested as of April 27.

“And in all of these, we have a total of 29 confirmed cases of COVID-19, 194 of these suspected cases has been confirmed negative,” the commissioner said.

“We have a case fatality rate of 10.3 per cent of the 29 confirmed cases we have with three deaths.

“So far, we have discharged eight persons. The total active cases that are currently under treatment in Edo is 18 and these are distributed as follows.

“We have nine of these cases in Stella Obasanjo Hospital, three in University of Benin Teaching Hospital.

“While three are also receiving treatment in Irrua Specialist Teaching hospital, all our active cases are stable and they are responding to treatment.

“We want to also let you know that about 31 samples have been sent and results are still pending.”

On his part, the state Deputy Governor, Philip Shaibu, who doubles as the Chairman of the Coronavirus Response Committee, said Governor Godwin Obaseki was consulting with medical experts and other stakeholders to reach a decision on new orders regarding the curfew imposed on the state.

The state government imposed a dusk-to-dawn curfew on April 19.

The Speaker of the Edo State House of Assembly, Frank Okiye, had on April 24 recovered from COVID-19.

The state’s Deputy Governor, Philip Shaibu, had announced that Mr Okiye was the first person to contract the disease in the state.

The politician had travelled to the United Kingdom and on his return embarked on self-isolation. 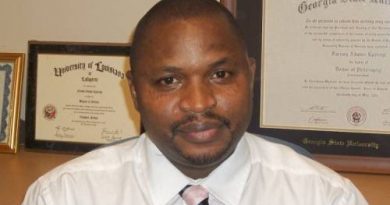 Abba Kyari’s Death, End Of A Surrogate Presidency, And The Coming Chaos By Farooq Kperogi

U don't blame them, we should blame those on ground but still had to support the lies being told because of their personal interest.

The First Lady of the Republic, H.E. Mrs. Rebecca Naa Okaikor Akufo-Addo has identified reading as the sure panacea to