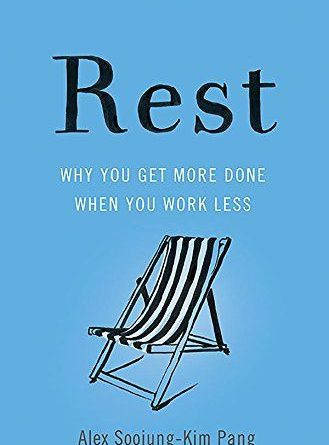 I recently found myself working 40 hours in only three days while writing and editing a draft—the high-intensity interval training of life as a writer. To help maintain the pace, I made sure to sleep for eight hours, worked out every day, and paused to eat the (at least semi-healthy) meals my husband made for me. But by day four, the words on my screen were swimming and swan-diving. My bullet-train hyperconsciousness blew off its rails. I was halfway incoherent and shivery-shaky. I was so out of it I tripped down three stairs, caught myself from falling the rest of the way, and then just sat down, bleary and mystified. I knew that if I kept going, I’d get sick or just shut down.

Culturally, we’ve acknowledged our fixation with “digital overwhelm” and “millennial burnout,” but we still do the same stuff, over and over. Even when I did have time away from my computer during my work cyclone to run, shower, or eat, I was also listening to podcasts or scrolling through Instagram, immersed in the usual digital cacophony. What I didn’t do was daydream, or stare blankly into space, or do any kind of nothing at all.

This is what has been termed “waking rest.” In a letter to the editor of the academic journal Sleep last fall, researchers at the Occupational Sleep Medicine Group at Washington State University describe waking rest as a “fourth puzzle piece” in the existing wellness trio of exercise, nutrition, and sleep. Waking rest is “a period of quiet, reflective thought that allows the brain time to consider and process whatever arises spontaneously,” says the letter’s lead author, Amanda Lamp, PhD. “Consciously stepping out of yourself and your deadlines and your to-do lists and everything you think is important, and allowing your brain the time to think about what needs to be processed or consolidated or thought through, or prepared for, or whatever the case may be.” Exactly what I was not getting during my three-day, screen-stoned brain-bender.

While related concerns like sleep, mindfulness, minimalism, slow living, and self-care have become contemporary wellness obsessions, none of these specifically address the importance of being both awake and unassigned, the essential nothingness of quiescence. Defining rest and making practical distinctions between rest, relaxation, idleness, leisure, entertainment, fun, and pleasure is both unfamiliar and essential, when so much of the average day, and thus the average life, is taken up by doing. Those of us committed to balance might put meditation on the iCal, but we understand it as another to-do benefiting our health and productivity. During waking rest, Lamp says, you can fold laundry or sweep or do some other rote task, but you shouldn’t mentally engage with anything—not even music. “The problem is, if you really like the song, you’re present with that song, [and] it’s not going to allow waking rest,” she explains.

Rest: Why You Get More Done When You Work Less

Something else to consider is what Alex Soojung-Kim Pang, the author of Rest: Why You Get More Done When You Work Less, describes as “deliberate rest.” Different from the default nothingness of waking rest, “deliberate” means choosing it, planning for it, and paying attention to it. “What turns out to be an important feature of rest is that we can actually get better at it,” says Pang, who also argues that “the most restorative kinds of rest are often physically challenging or mentally engaging.” So while waking rest would have me zoning out, free to float around in my thoughts, deliberate rest might include a bike ride, a game of Scrabble, or debating the future of The Real Housewives of Beverly Hills with a friend.

Waking and deliberate rest have intention in common: “You need time for rest, because that’s when the unconscious mind can get to work,” Pang writes. He recommends “layering” work and rest—“working intensively in bursts of four or five hours followed often, [and] almost immediately, by significant periods of rest and downtime.” (So, not grazing your inbox.) This shift from work to rest should happen within minutes so the subconscious can work through “information, judgment, and decision.” Pang adds, “Even while you’re off gardening, or you’re on the running trail, or you’re out with the dog, part of your mind is still processing this stuff, turning over ideas and trying out different possibilities,” Pang says. Ever have a breakthrough in the shower? This is why.

Pang says that “very successful” people he’s studied take at least an hour or two a day of deliberate rest. Author Malcolm Gladwell, who popularized the “10,000-hour-rule” of achievement, says he tries to spend at least an hour every day in “absolute silence,” often on a walk or run. “No phone, nothing in my ears, just an hour for me to think my thoughts,” he recently said on Gretchen Rubin’s Happier podcast. In other words, nothing might be the only way to get something.

Lamp says that the amount of waking rest a person needs could be based on factors like screen time and time spent outdoors, but she speculates that half an hour a day, “even just as a kind of baseline, would probably be beneficial for anyone.” But longer periods of rest are just as important. Pang says that an ideal vacation schedule is one week or 10 days, every three months. Happiness peaks around the seventh day of vacation, and the psychological benefits last about two months.

Filmmaker Tiffany Shlain’s new book, 24/6: The Power of Unplugging One Day a Week, describes her family’s long-standing “Technology Shabbat”: no screens for 24 hours, every Saturday, as a tech-oriented take on the Jewish Sabbath, the traditional day of rest. She says that her tech-free Saturday has a “ripple effect” throughout the week, supported by a couple of hours offline each day, but she points out that the daily breaks lack the power of the weekly digital day off. “When your phone is around, it’s a constant negotiation in your mind,” she says, which is exhausting and creates stresses of its own. This is especially true for women, who often feel responsible for doing the additional work of turning their leisure hours and interests into content: Taking pictures, editing, posting, and then tracking follows and likes are, after all, work.

Rest is also a feminist issue. Women are disproportionately without it, balancing the cognitive load of putting in a full-time effort at work and home while performing emotional labor. Using up all your available mental energy means that at the end of an impossible day, scrolling into the abyss is more likely than tucking into bed with a relaxing cup of golden milk. (A Pew study from early 2019 found that teenage boys get an hour more leisure time per day than teenage girls, so the differential starts early and keeps going.)

My Year of Rest and Relaxation

But nothing is, well, happening: In Ottessa Moshfegh’s buzzy 2018 novel, My Year of Rest and Relaxation, a woman decides to pill-sleep her way through a year, in a fantasy of refusal that is both WTF and entirely relatable for those of us who would consider a long period of aloneness and silence totally decadent. Drop-out, get-out culture has been updated and codified as a fashion trend by way of fleece jackets, Tevas, everything Outdoor Voices, and VSCO girl essentials like Birkenstocks and tie-dye. Marie Kondo’s method of discarding any possession that doesn’t spark joy has become a cross-platform phenomenon; “decluttering” is the thread running through our collective desire to just stop.

A new generation of business and self-help books, like Tiffany Shlain’s, are shifting focus from managing the too-much-ness of working women’s lives to eliminating it. Women-centric media, including the podcast Red Scare, has become increasingly suspicious of certain “progressive” ideals of work, like the hustle-harder movement that encourages women to be “girl bosses” and “boss babes,” marching through careers that still punish them for having kids, and pay them less for being women. The current self-care trend focuses on saying no, doing less, and creating boundaries, and the post-2016 activist movement has galvanized Gen Z and millennial women around wealth disparity, student debt, stagnant wages, and the toxic runoff of the gig-based and freelance economies. Jenny Odell’s 2019 book, How to Do Nothing: Resisting the Attention Economy, is a more radical and philosophical approach to the trend of refusal, which includes rest; she writes that “the ‘nothing’ that I propose is only nothing from the point of view of capitalist productivity,” a take that complements and maybe completes “waking” and “deliberate” rest.

“The work of reflecting on this, figuring out what works best for you, is a really valuable discipline,” Pang says. “[Rest has] never been something you do when you’ve finished everything else,” he writes. “If you want rest, you have to take it.”

Restore Your Body and Mind

Slip this smart ring on before you go to sleep to receive personalized health data when you wake up in the morning. Oura will let you know how you slept, determine your readiness for the day, and compute your ideal activity plan.

Studies have shown that weighted blankets can help to reduce stress and combat insomnia by replicating soothing, compression-based stimulation similar to hugging and massaging.

A thin layer within this foam mattress pipes through water for precise, customized temperature control, while a matrix of sensors tracks your respiratory rate, heart rate, and REM. The data is synced to an app that scores your “sleep fitness” every night.

Your legs get a foam roller after barre class. Now your eyes get Umay after a marathon day in front of the screen. The gadget looks like goggles, but the two pods use heat, vibration, and breathing cues to reduce digital eyestrain. Umay can also relieve associated symptoms, such as dryness and red, itchy, or tired eyes.

This article appears in the January 2020 issue of ELLE.

The spread of the novel coronavirus (COVID-19) has exposed the world to many of its deficiencies, and Africa is not