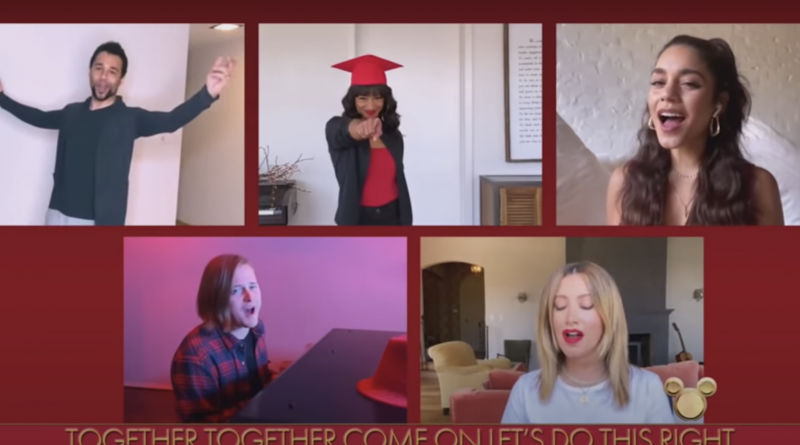 The biggest moment of Disney’s Family Singalong saw the original High School Musical cast reunited to perform the first movie’s finale son, “We’re All in This Together.” Vanessa Hudgens (who played Gabriella), Ashley Tisdale (Sharpay), Lucas Grabeel (Ryan), Corbin Bleu (Chad), and Monique Coleman (Taylor) all joined in for the performance, which was recorded via Zoom as the cast all quarantined. They were joined by members of the Disney+ High School Musical the Musical: The Series cast and other Disney friends.

Zac Efron introduced the group and was missing from the song:

But that’s only because he joined the production last-minute—and he was too late to get in on the song. High School Musical director Kenny Ortega spoke to Deadline about what happened.

“We couldn’t reach Zac until late but when we did, he immediately jumped in, of course,” Ortega said. “Everyone we reached out to was quick—and you’ll see it in their spirit and the way they come together from their homes. They recognize this is an opportunity to strengthen spirits for those joining us for the broadcast.” Efron filmed a special message for the program instead.

The High School Musical reunion comes just days after Hudgens teased the cast had reunited over video chart. Hudgens shared screenshots from their calls and footage from rehearsal as a behind-the-scenes look into the making of the big number.

This isn’t the first time the cast has reunited since the trilogy ended. They also got together in 2016 to film a 10-year reunion special. Efron did not join the group sit-down but recorded his memories of the series separately.

No justice, no feast: How hunger strikers are keeping the protest over Breonna Taylor’s death alive